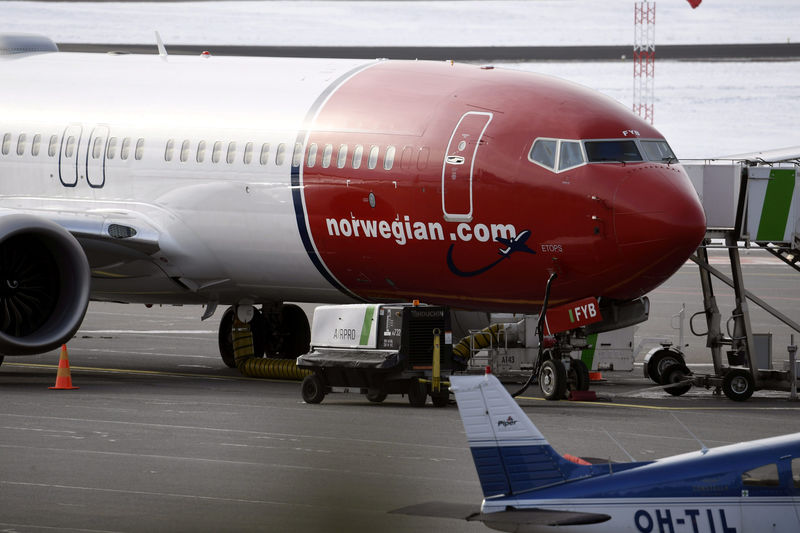 © Reuters. Grounded Boeing 737 Max 8 passenger plane of the Norwegian low-cost airline Norwegian is seen parked on the tarmac at Helsinki Airport in Vantaa

OSLO (Reuters) – Norwegian Air’s (OL:) income per passenger grew less than expected in September but its aircraft filled up at a faster pace than last year, the carrier’s monthly traffic report showed on Friday.

The airline’s yield, or revenue per passenger carried and kilometer flown, rose to 0.39 Norwegian crowns ($0.0428) in September from 0.38 crowns a year earlier, below the 0.40 crowns seen in a Reuters poll.

The company is on track to reach its target of cutting costs by 2 billion crowns this year, acting Chief Executive Geir Karlsen said in a statement.

“The outlook going forward is promising, and for the upcoming winter season, we have adjusted our route portfolio and capacity to ensure that we are well positioned to meet the actual demand,” Karlsen said.

Europe’s third largest budget carrier switched this year to prioritize profits over growth, but has been hampered by the grounding of Boeing (N:) 737 MAX aircraft and technical problems with Rolls Royce (L:) engines on Boeing 787s.

Norwegian’s bondholders agreed last month to postpone repayment $380 million of outstanding debt for up to two years, in the company’s latest bid to sort out its finances.

A string of European airlines folded in the last two years, including recent collapses of Aigle Azur, Adria Airways and travel firm Thomas Cook, but loss-making Norwegian has secured funding from shareholders to stay in the air.