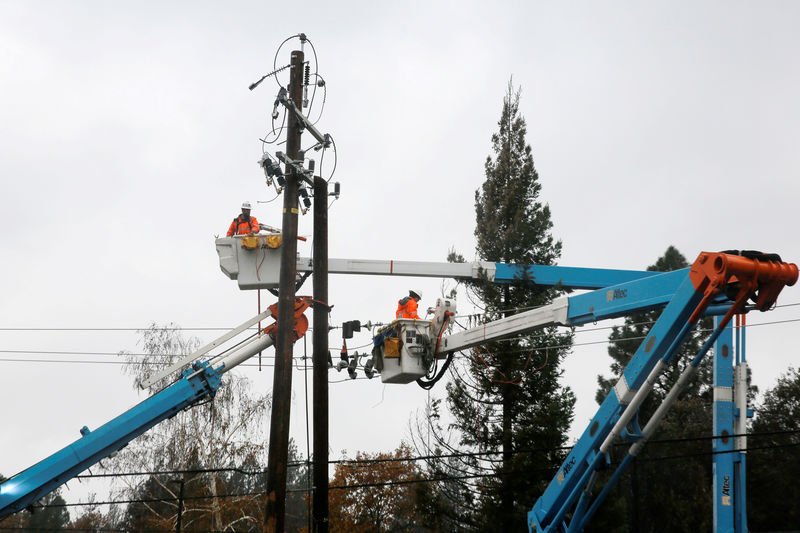 (Reuters) – Hundreds of thousands of California homes and businesses started to lose electric power early Wednesday as part of an unprecedented effort by Pacific Gas and Electric Co. to prevent wildfires, the utility said.

Nearly 800,000 northern and central California homes and businesses can expect to lose electricity for up to several days, starting on Wednesday, PG&E said.

State investigators determined in May that PG&E transmission lines had caused last year’s Camp Fire. That fire killed 85 people, making it the deadliest in California’s history.

The company had already filed for bankruptcy protection by then, citing potential liabilities of more than $30 billion from the Camp Fire and the 2017 North Bay Fires.

Conditions before the fires were about the same then as they are now in the region. Gale-force winds are expected to last through midday Thursday, with gusts up to 70 miles per hour, PG&E said. Humidity is low, leaving the air extremely dry.

The California Department of Forestry and Fire Protection (Cal Fire) said “red-flag” warnings were posted across the entire state for what was shaping up to be the strongest wind so far this season.

Consequently, PG&E said on Tuesday it was extending a previously announced “public safety power shutoff” to 34 counties, more than half of all the counties in California. It’s the largest such precautionary outage the utility has undertaken to date.

Once power is turned off, it cannot be restored until the winds subside, allowing the utility to inspect equipment for damage and make any repairs, PG&E said.

The first phase of the outages, affecting about 513,000 customers in northern California, began after midnight, PG&E said in an early morning release. Depending on the weather, additional outages will continue at noon, the company said.

“We’re telling customers to be prepared for an outage that could last several days,” PG&E spokeswoman Tamar Sarkissian told Reuters.

Some consumer advocates have objected to the precautionary disruptions, saying they can harm people who need electricity for medical equipment.

Sarkissian said PG&E had placed 45 helicopter crews and 700 extra ground personnel on standby for inspections and repairs once the wind dies down. Some equipment locations will require workers to hike into remote or mountainous areas, she said.