Home
Market
Renault board to meet, as CEO denounces potential exit as 'coup'
Prev Article Next Article
This post was originally published on this sitehttps://i-invdn-com.akamaized.net/trkd-images/LYNXMPEF9919P_L.jpg 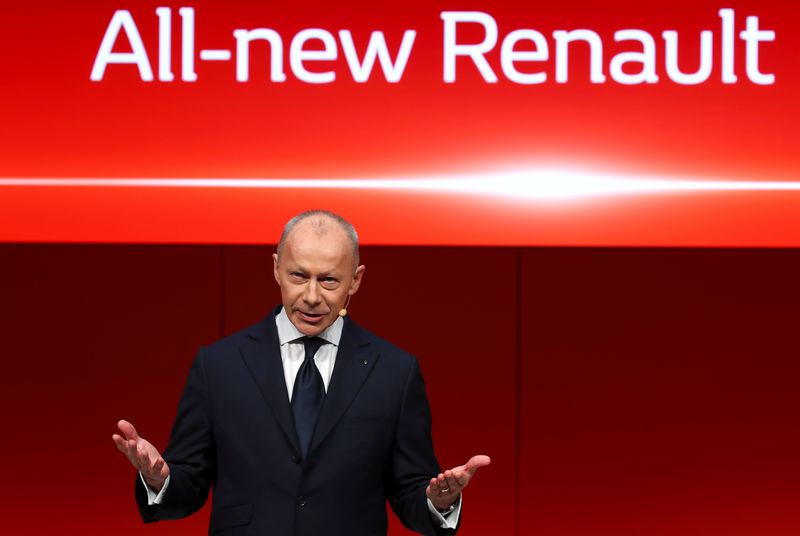 By Gilles Guillaume and Dominique Vidalon

PARIS (Reuters) – Renault SA’s (PA:) CEO, Thierry Bollore, denounced as a “coup” his potential exit from the French carmaker, which has called a board meeting on Friday to discuss governance matters.

Bollore also told Les Echos newspaper on Thursday he was appealing to the key Renault shareholder, the French state, to avoid destabilizing the company.

“The brutality and the totally unexpected character of what is happening are stupefying … This coup de force is very worrying,” Bollore said.

Earlier, Bollore had skirted the matter of his potential exit from the firm in a conversation with staff on Thursday, two company sources said.

A source close to the French government – a major Renault shareholder – earlier this week confirmed that a senior management shake-up at Renault was on the cards.

Le Figaro newspaper reported that Chairman Jean-Dominique Senard was poised to kick off a process to replace Bollore.

The French finance ministry expressed its support of Senard on Thursday evening – after Bollore’s comments were published – and said in a brief statement Senard was trusted to submit the “necessary decisions” to Renault’s board of directors.

The French state holds a 15% stake in Renault.

Speaking to staff on Thursday in an internal video exchange, Bollore referred to the media buzz and said that what mattered for the company was its alliance with Japan’s Nissan Motor Co Ltd (T:), and that it was “not a question of people,” the Renault sources said.

He avoided going into further details, however, saying only that he had met with Senard earlier on Thursday, and referred all matters to the board.

Renault declined to comment. Separately, the company said in a statement it would hold a board meeting on corporate governance issues on Friday.

The company, like its alliance partner Nissan, is still reeling from the arrest in Tokyo last year of former boss Carlos Ghosn on allegations of financial misconduct, which he denies.

Bollore, for a long time Ghosn’s right-hand man, was promoted to help steady Renault earlier this year, while Senard was hired from Michelin (PA:) to chair the group.

“The only thing one can reproach me, maybe, is to have been named deputy CEO in early 2018, on a proposal of Carlos Ghosn unanimously approved by the board,” Bollore told Les Echos.

As well as stabilizing the alliance with Nissan, Senard was tasked with shaking up Renault’s governance, which he had yet to do.

Any change at the top of Renault would follow on the heels of a management overhaul at Nissan, and could help ease tensions between the alliance partners.

A source close to the French government’s thinking denied that Bollore’s exit was part of a quid pro quo deal to appease Nissan and renew management at the top of the two companies.