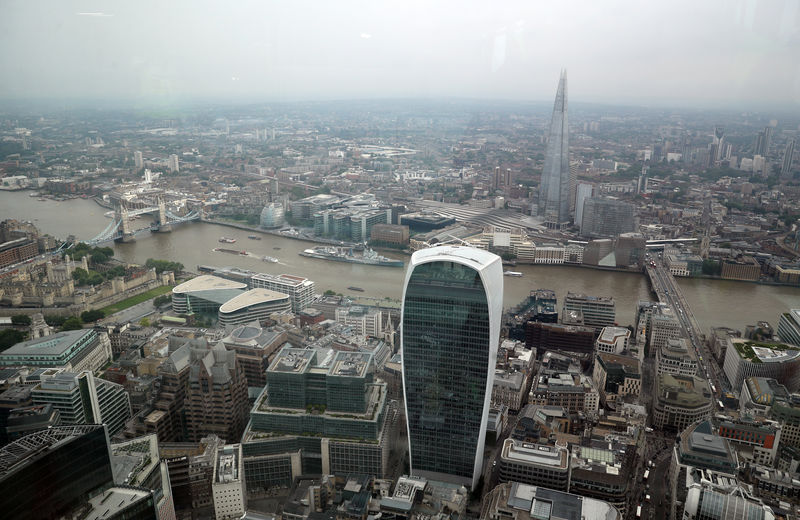 © Reuters. A general view of London is seen from the construction site of 22 Bishopsgate in London

LONDON (Reuters) – From the pinnacle of the City of London’s largest skyscraper, Stuart Lipton is wagering a $1.2 billion bet that the British capital remains a master of the international financial universe no matter what happens with Brexit.

The 76-year-old property developer is not alone. Bankrolled by a host of global investors, including France’s Axa (PA:), his big-ticket gamble in London’s financial district is – so far – on the money.

The cataclysmic warnings during the 2016 referendum that London would lose its financial throne if it voted to leave the European Union (EU) have, so far, been proven wrong. London is still the world’s banker, only bigger by some measures.

“London is extraordinarily resilient and its future as a finance centre is secure because what we have here is unique,” Lipton told Reuters on the 61st floor of 22 Bishopsgate, set to become western Europe’s second tallest skyscraper when it opens next year.

In the year to June, London has attracted more cross border commercial real estate investment than any other city. It has overtaken New York as destination for fintech investment and it has increased its dominance of the world’s $6.6 trillion daily foreign exchange market.

Since the vote to leave the EU, Britain has leapfrogged the United States to become the largest centre for trading interest rate swaps, despite calls by ex-French President Francois Hollande to end London’s dominance in clearing euro-denominated derivatives.

That London has expanded its influence as an international finance centre is one of the biggest riddles of the United Kingdom’s tortuous three year Brexit crisis.

The city’s standing ensures the United Kingdom keeps one of its last big chips at the top table of world politics just as it splits from the EU.

It also means EU companies will still come to London to raise finance outside the bloc after Brexit, a fact not lost on Wall Street heavyweights such as Goldman Sachs (N:) and JP Morgan (N:).

Just a mile away from 22 Bishopsgate, Goldman opened its new 1 million square foot European headquarters – complete with mothers’ rooms and wildflowers on the roof – in July, three years on from the 2016 referendum.

Largely abandoned by the British government during Brexit talks, ten senior industry officials told Reuters London’s financial services sector has grown since 2016 because there is no realistic competitor in its time zone.

And high-rolling bankers are too attached to its Anglo-Saxon, work-hard, play-hard culture.

The chief executive of the British division of one of Europe’s largest banks said although some business will move to the EU, most senior bankers will be reluctant to leave London. He would consider taking a 20% pay cut to remain in the city.

“If you are an Italian banker, who moved out to London 20 years ago, and your kids go to private school around the corner then you are not going to move to Frankfurt,” he said.

“MASTER OF THE UNIVERSE”

A global hub for trading, lending and investing, London is the largest net exporter of financial services in the world, with the EU accounting for a quarter of the business.

The 2016 referendum shocked many of the masters of London’s financial universe, triggering the biggest one-day fall of the pound since the era of free-floating exchange rates was introduced in the early 1970s.

But so far, most major financial institutions have opted against moving large numbers of people and activities until the loss of access to the EU’s lucrative single market is confirmed.

Banks, insurers and asset managers have shifted over a trillion euros of assets such as derivatives and bonds from London to the continent and opened new EU hubs as a hedge against London suddenly being cut off from the bloc if Britain exits the EU without a formal agreement.

The Bank of England estimates around 4,000 people may have moved by the time Britain has exited the EU. But the key decisions are still taken in London.

Reuters contacted JP Morgan and Goldman, and rivals Citi (N:), Bank of America (N:), UBS (S:), Morgan Stanley (N:), Credit Suisse (S:) and Deutsche Bank (DE:), to seek details on how a ‘no deal Brexit’ might accelerate the transfer of resources and activities from London.

All banks said they were prepared for a no-deal Brexit, and had been since the first quarter.

It is not clear how much of that drop is due to Brexit and how much is due to new regulations or structural changes, such as higher numbers of tech specialists at lenders while traditional banking jobs shrink.

Initial estimates of potential job losses ranged from about 30,000 roles within a year of Britain leaving the EU, estimated by the Brussels-based Bruegel research group, to up to 75,000 by 2025 by Oliver Wyman.

Oliver Wyman said they stand by their predictions because it is important to distinguish between job losses on the first day of Brexit and over the longer term. The final number will depend upon the level of market access, which is not clear yet.

Bruegel did not respond to a request for comment.

Financial capitals such as London have remarkable longevity and their rise and fall typically happens at a glacial pace, said Youssef Cassis, a professor of economic history who specialises in financial centres.

“There is no precedent for decoupling between a major economic power- in this case the European Union- and its financial centre, London,” he said.

Some key activities have moved out of London ahead of Brexit. Euro zone government bond and repurchase agreements trading worth around 230 billion euros a day, along with clearing, switched to Amsterdam, Milan and Paris earlier this year.

Nicolas Mackel, who heads a body promoting Luxembourg’s financial centre, said it would be a shift in activities and not jobs that will affect London most.

“It’s not between now and Christmas you have to look, but on a five, 10, 15 and 20 year framework. It’s a false comfort that you are providing by only focusing on jobs,” Mackel said.

After Brexit the $15.9 trillion EU 27 economy will still be reliant on a financial capital outside its borders, which could be politically hard for Brussels to stomach indefinitely.

One European Commission official, speaking on condition of anonymity, told Reuters that the EU had no intention of smothering Britain’s financial sector to accelerate its own plans for an EU capital markets union.

But there is scepticism in the market about the longevity of such pledges.

“Why should one expect the EU to give an economic answer to what is a political challenge?” said Xavier Rolet, former head of London Stock Exchange and CEO of investment manager CQS.

“I would expect them to respond politically, even if those answers are not necessarily in the best economic interests of EU-based investors, corporates and banks.”

Rolet, who said in the aftermath of the referendum that half of all finance jobs in London may disappear if derivatives clearing left the capital, said it was too early to assess the implications of Brexit.

“I do stand by my statement,” he said of the potential job losses.