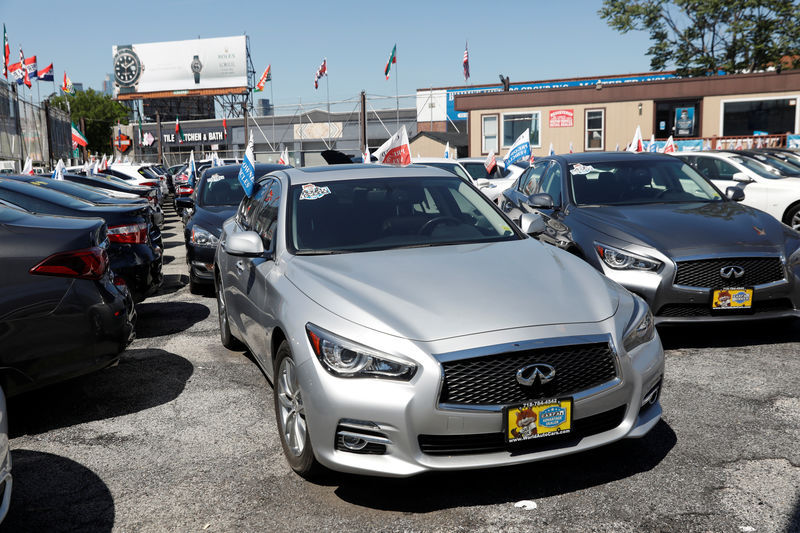 © Reuters. Automobiles are seen for sale in a car lot in Queens, New York

(Reuters) – U.S. auto sales are expected to dip 1.3% in October from the same period a year ago, auto consultants J.D. Power and LMC Automotive said on Tuesday, as replacement demand slows following a long bull run since the 2008 financial crisis.

The consultancies expect total U.S. vehicle sales of about 1.39 million units for October, with retail sales of new vehicles declining about 1% to 1.13 million units.

Large discounts from manufacturers are powering top-line industry results for October, J.D. Power and LMC Automotive said in a statement.

“Incentive spending is on pace to exceed $4,000 per unit for the fourth consecutive month as record levels of old model-year inventory persist,” the consultancies added.

They estimate average new-vehicle sales price to cross $34,000 for the first time in October, and up almost $1,300 from a year earlier.

The rise in prices is partly due to the ongoing shift in demand toward more expensive trucks and sport utility vehicles, which are expected to make up for more than 72% of the vehicle sales in October, up 2.4 percentage points from last year.

Higher prices mean that U.S. consumers are expected to spend $38.8 billion on new vehicles in the month, up nearly $2.5 billion from a year ago, the consultancies said.

“Trade risk and vehicle affordability remain top concerns for the coming year, but the economy is expected to remain supportive with growth at a sub-2% level.”