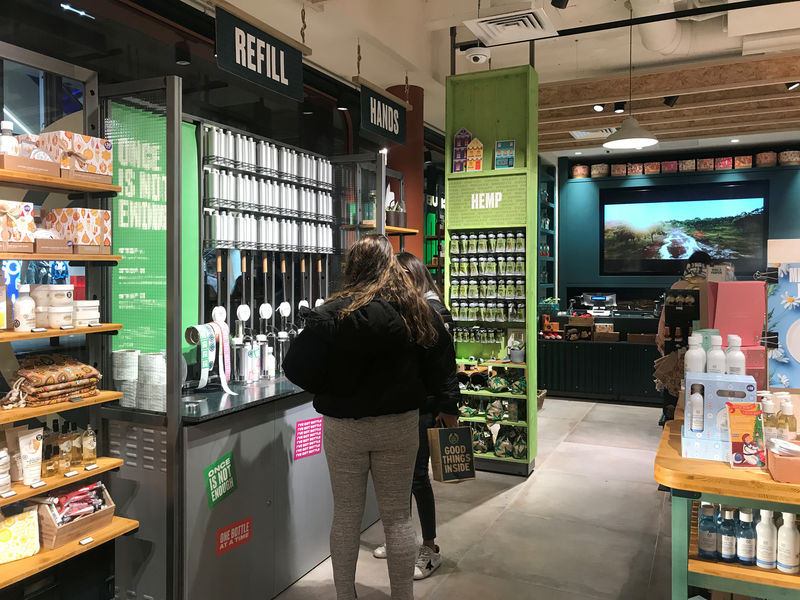 By Siddharth Cavale and Richa Naidu

P&G, with roughly $68 billion in annual revenue, said it has invested millions in creating and testing refills for detergents over the years and is now trying to push in to mainstream beauty and body care refills – which are virtually unheard of.

It recently began offering some Olay face-cream jars with refill pouches on Olay.com, telling Reuters it has plans to expand the sales of the pouches in Europe early next year. “We’re learning on our legs so I don’t know that we’re in a position to say, ‘Hey, here’s the magic to selling refills,'” P&G spokesman Damon Jones said.

Beauty products retailer The Body Shop, owned by Brazil’s Natura Cosmeticos SA (SA:), says it plans to roll out “refill stations” in its stores globally next year, allowing shoppers to buy reusable metal containers to fill with Body Shop shower gels or creams. The company had offered refills at its stores in the early 1990s, but discontinued them in 2003, citing a lack of consumer demand.

Unilever, which has set targets for reducing and recycling plastic by 2025, in October announced the planned launch of “refill sticks” of deodorants under its Dove line of personal care products on Loopstore.com. The website, operated by recycling company TerraCycle, offers consumers the chance to buy some household products in ultra-durable packaging with refills delivered to their doors, milkman-style.

Across the consumer goods industry, results for refillable products have been mixed so far as many shoppers are far too set in their ways to be easily weaned from living in a throwaway culture. While refills are less expensive to purchase – generally priced at 20% to 30% less per item than the containers they are aimed to replenish, according to Unilever – shoppers have so far, for the most part, failed to snap them up, the companies said.

SC Johnson & Son Inc, marketer of Windex and Pledge, said refills and concentrates so far have not played well with either Americans or Europeans over the decade they have been offered, with unit sales of such products pretty much flat. It pulled concentrated refills for Shout stain remover off the shelves because they were not selling very well.

In 2010, Unilever put 20-liter tanks to dispense detergents in Walmart Inc’s (N:) British supermarket chain Asda, and provided flexible pouches for customers to refill. But with leaky machines, safety and maintenance problems and the high costs of upkeep, Unilever said the tests fell short of expectations. Asda was also unhappy because the tanks occupied a lot of space.

“None of them sell very well – it is a convenience issue,” SC Johnson CEO Fisk Johnson told Reuters. Johnson said some people find it painstaking to wash and refill bottles themselves while others worry that smaller bottles filled with concentrates are less “bang-for-your-buck” than the larger ones they have used for years.

Still, the privately held company said it was expanding its refill offerings this year to address concerns surrounding plastic waste and is also testing refill stations for cleaning products with UK retailer Waitrose, owned by Britain’s John Lewis [JLPLC.UL]. The Waitrose tests are showing the first signs of progress in refill sales, Johnson said, and the company is now thinking of expanding the project.

Even if consumers are comfortable using refills for some household goods, it is more complicated to sell them for products like Pantene shampoo and Olay creams, P&G spokesman Jones said. For instance, with beauty products, the look and feel of packaging is a big factor in creating and maintaining customer loyalty, while delivering an environmental benefit, he said.

Some shoppers say they want to buy refillable products, but that the offerings are not available at many stores. Earlier this year, dozens of consumers took to social media to urge The Body Shop to bring back its refill counters.

The Body Shop eventually responded to those pleas.

“Now with the renewed focus on sustainability, we believe it is the right time to return with it,” Body Shop spokeswoman Lucy Muircroft told Reuters this week.