Home
Stocks
The Tell: Here are the most heavily shorted stocks on Wall Street
Prev Article Next Article
This post was originally published on this site

With U.S. stocks up around 25% so far this year, it would appear to be have been a tough year for short sellers. But a breakdown of the most shorted large-cap stocks indicates Wall Street’s nabobs of negativity have enjoyed a somewhat more upbeat story.

In a Tuesday note, analysts at Bespoke Investment Group observed that Russell 1000 RUI, +0.11% stocks with more than 20% of their float sold short have seen total returns of 14.81% so far in 2019. That’s a solid gain, though it lags the returns of more than 25% posted by large-cap indexes, including the S&P 500 SPX, +0.11% , over the same time. That means shorts “have done OK on a relative basis,” the analysts wrote.

Compare that with the least-shorted stocks in the index, which are up 31.27% in 2019 to date, the analysts noted, more than double the return of the most heavily shorted stocks.

An investor can bet against a company by borrowing a stock and selling it on the open market, with the intention of buying it back later at a lower price. Heavy short interest is viewed by some investors as a potentially contrarian indicator. Moves to the upside by unpopular stocks can be accelerated when short sellers are forced to scramble and buy the shares to get out of a losing position.

Bespoke lists the most heavily shorted stocks, sorted by percentage of their float sold short, in the table below: 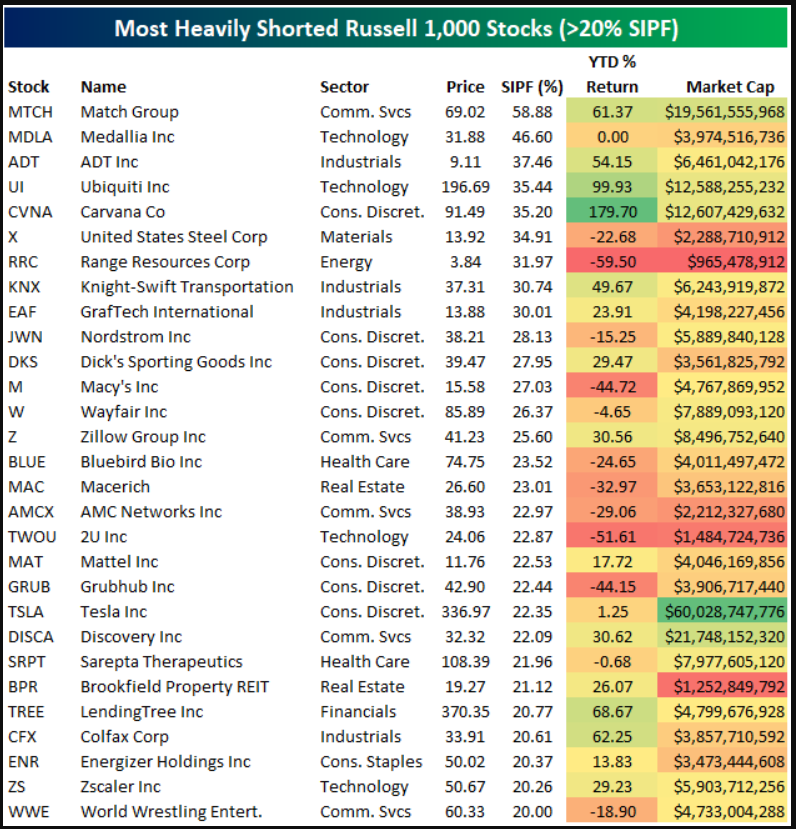 Online-dating company Match Group Inc. MTCH, +1.08% isn’t getting many investor love letters, with nearly 59% of its float sold short, topping the list. Shares have had a bumpy ride lately, declining 4.4% this month and nearly 19% over the last three months, but the stock has still run up a return of more than 60% in 2019.

Overall, 4.9% of the Russell 1000’s float is sold short, the analysts said, with communications services the most heavily shorted sector, at 7.5%. Utilities are the least targeted by short sellers, with 3% of that sector’s float sold short.

Among individual companies, shares of alcoholic-beverage producer Brown-Forman Corp. BF.A, +1.50% are the least shorted stock in the index. Just 0.2% of the company’s float is sold short, Bespoke said. Brown-Forman shares have enjoyed a 36.5% return so far this year.

In an interesting wrinkle, the Bespoke analysts noted that, while tobacco companies like Altria and Philip Morris certainly aren’t popular among market participants focused on ESG investors — funds and individuals limiting their investments to companies that score acceptably on environmental, social and corporate-governance metrics — “their high dividend yields (which shorts have to pay) help keep the shorts away.”