Home
Stocks
Economic Report: U.S. trade deficit falls 7.6% in October to 16-month low on decline in Chinese imports
Prev Article Next Article
This post was originally published on this site 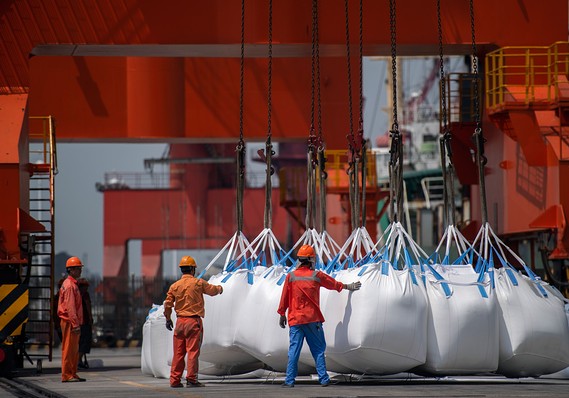 The U.S. trade deficit fell in October largely because of lower imports from China, but the decline is unlikely to last.

The numbers: The nation’s trade deficit dropped almost 8% in October to a 16-month low, largely because of lower imports from China tied to the ongoing U.S. trade dispute with the Asian giant.

The deficit slid to $47.2 billion from a revised $51.1 billion in the prior month, the government said Thursday. If it persists through December, the smaller gap could give a boost to gross domestic product in the fourth quarter. 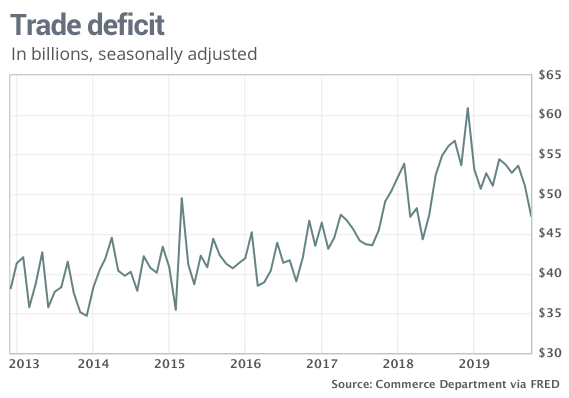 Economists polled by MarketWatch had forecast a $48.5 billion gap.

The U.S. imported fewer drugs, cell phones, electronics, clothing and toys and other goods, much of it from China. Imports of Chinese goods shrank by $1.8 billion to $35.3 billion.

The decline in imports largely reflects a recent up-and-down pattern depending on the timing of new U.S. tariffs on China. Companies rushed to import consumer goods from China in August before scheduled U.S. tariffs went into effect.

Exports dipped a smaller 0.2% to $207.1 billion. Shipments of drugs, airplane engines and autos all decreased.

For the second month in a row the U.S. posted a record surplus in petroleum, showcasing the country’s reemergence as an energy superpower.

Although tariffs have caused a record trade deficit with China to tumble in 2019, the gap has grown with other countries and left the U.S. in no better position.

Big picture: The U.S. is on track to record the biggest annual trade deficit in 11 years.

The deficit has grown in 2019 partly because the economy is doing better than in most other countries. Americans can afford to buy more imports. Weaker economic performance around the world has also led to softer demand for U.S. exports.

A bigger trade deficit subtracts from gross domestic product, but the U.S. has run large deficits for so long it’s had virtually no influence on how consumers and businesses behave.

What the are saying?: “The sharp narrowing of the trade deficit, to a 16-month low in October, was partly driven by a GM-strike related drop in auto imports and the unwinding of stockpiling ahead of the September tariffs,” said senior economist Michael Pearce of Capital Economics.