Home
Market
Arsenal kit still on sale in China despite Ozil Uighur backlash
Prev Article Next Article
This post was originally published on this sitehttps://i-invdn-com.akamaized.net/trkd-images/LYNXMPEFBF0J5_L.jpg 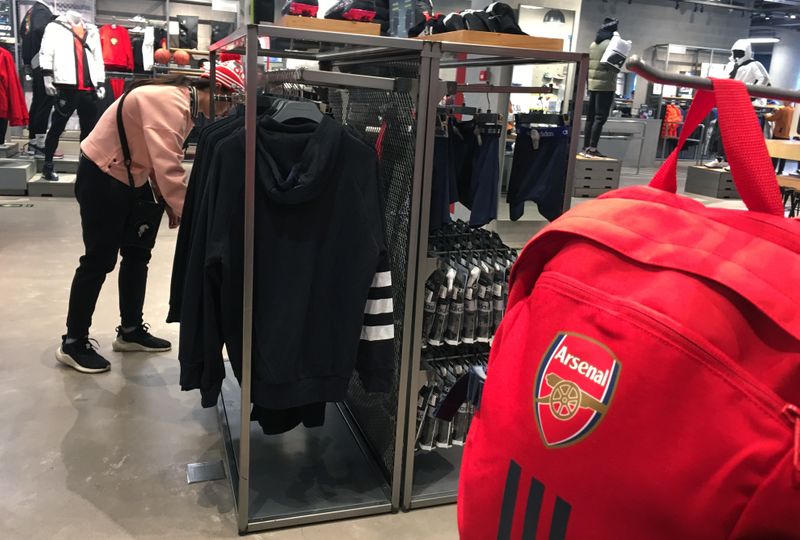 By Sophie Yu and Brenda Goh

BEIJING/SHANGHAI (Reuters) – Stores in China said on Monday they were still selling Arsenal kit even after Mesut Ozil’s Uighur comments, in a sign the soccer club may not be as heavily punished commercially as the National Basketball Association was over a pro-Hong Kong tweet.

A chatroom on Ozil on online forum Baidu (NASDAQ:) Tieba was shut on Monday, and the state-backed Global Times tabloid said that Ozil’s online fan club had been “suspended” without providing further details. Some Chinese sellers on Alibaba’s Taobao e-commerce platform said they had stopped selling his shirts.

But even as the fallout from his comments blasting China’s policy toward its Muslim Uighur minority continued – drawing criticism from China’s Foreign Ministry, state media and some fans – merchandise from the London club was still on sale.

Arsenal was quick to distance itself from their midfielder’s comments, posting a statement on China’s Twitter-like Weibo platform saying it was his personal opinion.

But they prompted speculation the club would face a fate similar to the NBA, which says it has incurred substantial financial losses in China after a Houston Rockets official tweeted his support for the Hong Kong pro-democracy protests.

Following the tweet by the Rockets’ general manager, Chinese broadcasters stopped showing NBA games, while corporate partners in the country scrapped or suspended relations with the league. Houston Rockets sneakers and other merchandise were also pulled from several Nike (NYSE:) stores.

But checks by Reuters at stores selling merchandise by Arsenal’s official kit supplier Adidas AG (DE:) in Beijing and Shanghai showed products related to the Premier League team were still on sale on Monday.

“We didn’t receive any message that Arsenal’s co-branded products should be removed from the shelves. These co-branded products were a collaboration with the whole Arsenal team, not with the player Ozil,” said a staff at one of Adidas’ Shanghai stores who would only give his name as Ben.

Adidas did not immediately respond to a request for comment.

Arsenal-branded merchandise was also still on sale on major Chinese e-commerce platforms Alibaba (NYSE:) and JD.com on Monday. These platforms took Houston Rockets merchandise off their sales platforms in October after the comments.

While some young Chinese, such as student Xiong Zexin, 23, said: It is always like this. They must pay a price for this,” much of the furor has centered on Ozil not the club.

“If you don’t understand this matter then there’s no need for you to make comments about politics. You’re not a politician,” student Li Yandong, 29, said.

At least five sellers on Alibaba’s domestically focused e-commerce platform Taobao told Reuters that they were no longer selling jerseys emblazoned with Ozil’s name and his number “10” due to the incident.

The United Nations and human rights groups estimate that between 1 million and 2 million people, mostly ethnic Uighur Muslims, have been detained in harsh conditions in Xinjiang as part of what Beijing calls an anti-terrorism campaign. China has repeatedly denied any mistreatment of Uighurs.

Ozil, a Turkish Muslim, called Uighurs “warriors who resist persecution” and criticized both China’s crackdown and the silence of Muslims in response.

China’s Foreign Ministry said on Monday that Ozil had been “completely deceived by fake news and false statements” and said he was welcome to visit Xinjiang.

“We also welcome Mr. Ozil to come to Xinjiang if he has the chance, to take a walk and look around, as long as he has a conscience, is able to distinguish right from wrong and uphold the principles of objectivity and fairness, he will see a different Xinjiang,” its statement said.

An executive at another Chinese broadcaster, who declined to be named due to the sensitivity of the situation, said CCTV and PPTV’s reactions were to be expected given the precedence set by the NBA, but said the timing and fact that Arsenal was British, and not American, could give it some leeway.

“The Arsenal incident is quite different from the NBA incident, because that happened just after (China’s) National Day, when patriotic feelings were high,” he said.

Still the Global Times, which is vocal in its criticism of companies whose behavior displeases Beijing, warned that Arsenal could still face further blowback. The newspaper’s stance does not necessarily reflect Chinese government policy.

“The episode has destroyed Ozil’s image and Arsenal and the Premier League may have to pay the price,” the Global Times said on its official Twitter account.