Home
Stocks
Deep Dive: Here are Wall Street’s favorite stocks for an oil-sector recovery in 2020
Prev Article Next Article
This post was originally published on this site

The energy sector has been the weakest performer in the S&P 500 Index this year, and it has been out of favor for a long time.

The world oil market has changed, with the U.S. now the largest producer, with exports outweighing imports. But on Monday, there seemed to be new enthusiasm for U.S. energy stocks as investors digested the U.S.’s “phase-one” trade deal with China.

• Phase one of U.S.-China talks was hard — and the next part will be even harder

• China says it will put off tariff hike on U.S. autos, other goods following trade deal 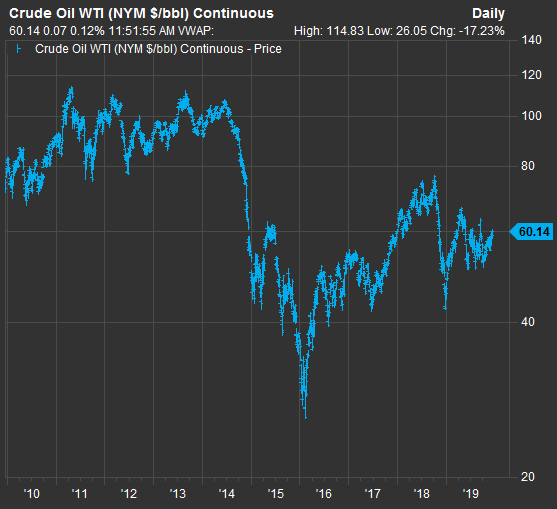 There has been a notable recovery from the doldrums of early 2016, but investors who were burned when the 2015 rebound was interrupted haven’t been in a forgiving mood. You can see the subsequent setback in 2018.

The sector list is sorted by ascending performance this year through Dec. 13. Energy brings up the rear for all periods because of the historical declines in oil prices in 2015 and 2016.

Prospects of an easing of trade tensions and an economic recovery in emerging markets fed enthusiasm for energy stocks Monday, as crude-oil futures headed to a three-month high.

A look at a “stock-bond ratio” led Will Geisdorf of Ned Davis Research to select 10 ETFs for investors to take advantage of current market conditions, with three oil-industry funds included.

In his daily Energy Report on Monday, Price Futures Group senior account executive Phil Flynn wrote that “China’s oil demand should only get better,” based on recent economic data.

There are 28 stocks in the S&P 500 energy sector. Sell-side analysts polled by FactSet have majority “buy” or equivalent ratings on 20 of them. Fifteen have “buy” ratings by at least two-thirds of the analysts. Here they are, sorted by percentage of favorable ratings:

You can click on the tickers for more about each company.

The worst-rated S&P 500 energy stock (with 19% “buy” ratings) is Occidental Petroleum OXY, +1.21%, which famously outbid Chevron CVX, +1.01%  to pay a fat premium to acquire Anadarko Petroleum in April. That deal was completed in August. Carl Icahn skewered Occidental’s CEO, Vicki Hollub, and the company’s board of directors in a letter to shareholders on Aug. 28, which all investors should read.