Home
Stocks
Paul Brandus: The real cable news bias isn’t what you think
Prev Article Next Article
This post was originally published on this site 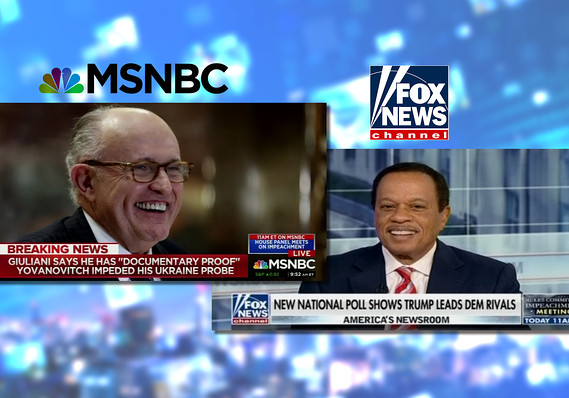 People’s heads explode when they find out that—many years ago—I worked as a television producer at both MSNBC and Fox News. “So what are you?” they’ll invariably ask, meaning am I a far-left, free-stuff for everyone loon or a far right lying Russian puppet nut job? It’s got to be one or the other, you know. At least that’s what folks seem to think, based on questions I’ve gotten for years.

Left-wing loons and right-wing nuts. This is the way Americans are conditioned to think these days. There’s little room for nuance anymore; the last two decades have seen an accelerated erosion of the political middle, with folks identifying with one tribe or another—and shunning those on the other side. Things are getting angrier and nastier, it seems, by the day.

You do know, of course, that we’re paying a price for this. Even as we criticize Washington politicians for their inability to tackle big problems—compromise is a dirty word—our own unwillingness to reach out to the other side is fueling everything from workplace stress to broken friendships. One study has claimed that “one in 10 couples (married or unmarried) ended their relationships over political disagreements, with millennials parting ways at a particularly high rate of 22%.”

Many things are accelerating our national divide. Twitter and Facebook are leading culprits, fueling the tribalism that allows us to congregate with only one side—while mocking, belittling and dehumanizing the other.

But Twitter and Facebook are also what I call subsidiary platforms, meaning much of what you find there migrated from elsewhere, notably cable news. Clips from shows rocket around social media, amplifying the views—right or left—of those posting them. Consumers of media today generally aren’t looking to learn from or engage with others. They’re looking for validation of what they want to believe, and the anti-Trump MSNBC and pro-Trump Fox provide it.

This amplification gives cable news greater influence than they deserve. Why do I say this? Because hardly anyone actually watches these channels to begin with.

Take Tuesday, Dec. 3. It wasn’t exactly a slow news day. The House Judiciary Committee—tasked with drawing up articles of impeachment against President Trump—was gearing up for dramatic testimony from four legal scholars. The president himself, meanwhile, was in London for two days of diplomacy with fellow leaders from the North Atlantic Treaty Organization and some socializing with members of the British royal family.

As usual, the three cable news nets covered it all heavily, with armies of journalists on Capitol Hill, London and elsewhere trying to dig up whatever scraps of information they could.

But guess what? Hardly anyone watched. In the 4:00 p.m. Eastern hour that day for example, the combined audience for Fox New’s Neil Cavuto, CNN’s Jake Tapper and MSNBC’s Nicolle Wallace was 4.41 million. In the 9:00 p.m. hour—Sean Hannity on Fox, Chris Cuomo on CNN and MSNBC’s Rachel Maddow pulled in a combined 7.8 million.

Which means that out of a U.S. population of around 328 million, only 1.3% to 2.4% of Americans were tuned in, respectively. But 98% to 99% had better things to do. It’s only the president of the United States being impeached, right? It has only happened twice before! No big deal!

Count me among the overwhelming majority of Americans who don’t bother watching. It might seem odd that a longtime Washington journalist like me, who’s been trooping to the White House, Capitol and other places for many years, doesn’t watch cable news, but I don’t. It’s not overly necessary, it’s a time suck and, perhaps most importantly of all, I don’t think it’s particularly healthy, either physically or mentally.

Question: Do you honestly feel better informed after watching cable news? One study by Fairleigh Dickinson University, makes the claim that it actually makes you dumber, producing a “negative impact on people’s current events knowledge.”

Of course, you might not even be aware of this “negative impact” on your knowledge, because these channels are reinforcing what you wanted to believe in the first place. In other words: You feel more informed, but actually the opposite might be true.

Then there is this: Whatever political bias these channels have (and they have them) is always driven by an even bigger bias: that towards drama and conflict. The constant use of “breaking news” banners to announce often insipid bits of information. “Countdown clocks” to marginal events. Dramatic music, whooshing sounds, bells underneath it all. There are 24 hours to fill and it’s cheaper to have an endless parade of talking heads—often underqualified pundits and journalists who are supposed to have an opinion on everything.

All of this draws eyeballs—even 1% or 2% of the country is enough to make money—and when you get right down to it, that’s why CNN, Fox News and MSNBC are in business: Not to make you smarter and more informed, but to make money for their corporate parents: AT&T T, +0.03%  , Fox Corporation FOXA, +0.07%  , and Comcast CMCSA, -0.03%  , respectively.

It’s hardly cynical to say that’s why they were created.