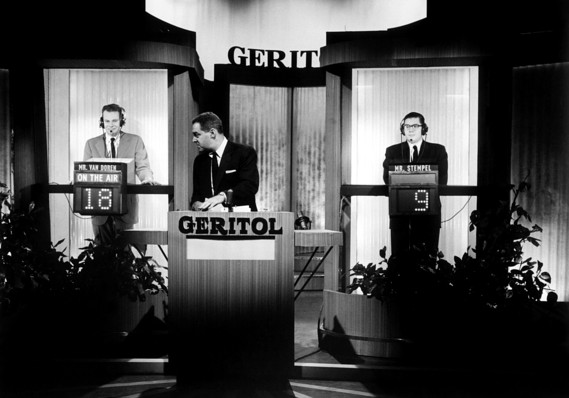 Charles Van Doren and Herbert Stempel on “Twenty-One” in 1956. The quiz show scandals of the late 1950s led to directly to the format for presidential debates still used today.

Televised political debates continue to disappoint viewers and critics. Sometimes they even frustrate the participants themselves.

That’s because, since their inception, nobody has been able to come up with a model that rival candidates would accept, and that would be useful and informative for the viewing public.

The only debate arrangement everyone agreed to nearly 60 years ago largely remains in place today — the game-show format.

Also read: Here are the 15 Democrats running for president, as half of the field prepares for Thursday’s debate

The first TV debates were shaped by federal regulations, an enterprising network executive named Frank Stanton, and a series of negotiations that were hampered by a tight schedule and dueling campaigns.

As far back as 1936, radio broadcasters had wanted to air live debates between presidential candidates. But Section 315 of the 1934 Communications Act required equal airtime be devoted to every announced candidate, preventing broadcasters from limiting the debate pool.

Stanton, president of CBS from 1946 to 1971, regularly proposed debates and often went to Washington to lobby Congress to change the law. In the late 1950s, he found his moment.

The rise and fall of quiz shows

Programs like “The $64,000 Question,” “Twenty-One” and “Tic-Tac-Dough” delighted audiences and turned contestants and the shows’ hosts into national celebrities. The shows were all pretty similar, designed to showcase intellect while letting viewers at home test their knowledge.

In 1958, though, some players began to complain that the shows were rigged, saying they were given the correct answers, or instructed to answer incorrectly, to boost suspense and attract viewers.

The revelations shocked the nation, leading to calls for political action and more regulation of television programming. Within the industry, critics and journalists called on TV networks to renew investment in public affairs broadcasting.

Stanton seized the moment. He suggested televised political debates could be a way to redeem TV; NBC President Robert Sarnoff and other industry leaders joined him. Their lobbying was enough to get Section 315 suspended, and 1960 proved the perfect moment.

President Dwight Eisenhower was finishing his second term, and both Democrats and Republicans would be nominating new candidates. These two new nominees would need to appeal to the broad, TV-watching American public in new ways.

Stanton got both Vice President Richard Nixon — who had been a champion debater at Whittier College — and Sen. John F. Kennedy to accept invitations to debate live on television. That’s when the really difficult negotiations began.

Stanton’s earliest concept had the two candidates facing a panel of journalists who would ask questions, but representatives of both candidates were wary of the new idea. The whole format had to be agreed on by the TV networks, the political parties, and the candidates themselves.

As communications scholar John W. Self explains, nobody really called the events “debates” while the arrangements were being hammered out. Instead, they were always officially referred to as a “joint appearance series.” Every detail took a long time to agree on, as the election drew ever closer in the late summer of 1960.

Democratic Sen. Mike Mansfield publicly worried that this opportunity for fruitful exchange might end up as little more than “a beauty contest, press conference, or quiz program.”

Sure enough, the time pressures pushed everyone to agree on an established TV format Americans were familiar with: the quiz show.

The required studios were easily available, the production staff already knew what to do, and journalists could easily moderate discussions in which candidates agreed not to directly question or answer each other.

To everyone involved, it seemed the safest way to ensure that each candidate might enhance their own reputation without risking damage to their campaign.

To the audiences, though, the similarity was obvious — and disappointing.

Historian Daniel Boorstin said they reduced “great national issues to trivial dimensions.” Scholar Richard Tedlow drew the parallel more sharply, concluding that “the debates bore as little relationship to the real work of the presidency as the quiz shows did to intellectuality.”

Even Stanton eventually realized how his creation stymied real understanding. The best interrogators, he thought, would be the candidates themselves, who would have to understand and counter the weaknesses in each other’s ideas.

“I would have the two candidates for president sit down face to face in front of the camera, and take a single issue and discuss it,” he once explained. “I would have no questions from the press at all.”

He even considered the most obvious objection: What would happen if one of the candidates refused to engage properly, or wouldn’t let the other get a word in edgewise?

“When you become candidates for president of the United States, you don’t misbehave in front of, you know, 40 million people,” he explained — perhaps a bit too optimistically.

Stanton and those early critics saw what TV audiences see decades later: These events are not debates at all. There’s no informative interchange between the participants, no considered reasoning, and very little clarity about what candidates think or propose.

Instead, the quiz master, usually a well-known broadcast journalist, gently interrogates each contestant. The questions can be pointed and specific, but the answers are always soundbites tested on focus groups. The candidates’ body language is rehearsed, as is quickly changing the subject, ignoring questions or misdirecting the audience’s attention.

Just like on game shows, candidates are not supposed to question or interrupt each other, and specific moments are intended to humanize and personalize the candidates. Even buzzers are sometimes employed to stay on time.

The candidates get thanked for playing when the game is over, while the audience considers how and why the game was won — and by whom.

The whole production is tidy, predictable, nonthreatening and occasionally entertaining. That’s precisely why the two dominant political parties, and their candidates, still insist on the format.

Michael J. Socolow is an associate professor of communication and journalism at the University of Maine. This article was originally published by The Conversation — Think presidential debates are dull? Thank 1950s TV game shows.