Home
Stocks
Key Words: Trump blasts windmills for killing ‘many bald eagles’ and polluting the air
Prev Article Next Article
This post was originally published on this site 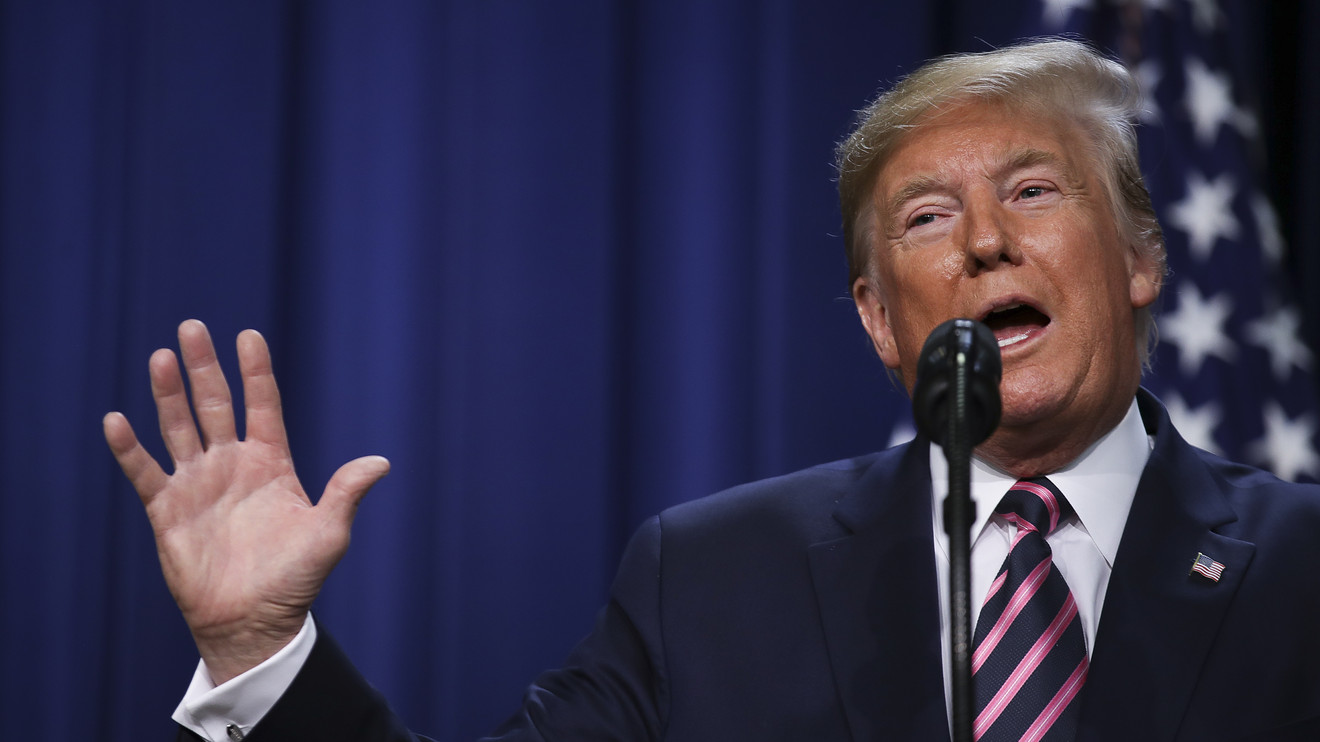 For someone who doesn’t understand wind, as he said over the weekend, Donald Trump sure waxes long-winded about it.

The president, speaking at the Turning Point USA Student Action Summit in West Palm Beach, Fla., on Saturday, was mocking the Green New Deal, a set of policy priorities introduced early this year by Rep. Alexandria Ocasio-Cortez (D-N.Y.) and Sen. Edward J. Markey (D-Mass.) — and soon thereafter the subject of a so-called show vote called by Sen. Mitch McConnell — when he pivoted into a rant against wind power. “We’ll have an economy based on wind,” Trump said, before launching into a eyebrow-raising critique of wind farms.

President Trump: “I never understood wind, you know I know windmills very much. I’ve studied it better than anybody.” https://t.co/D6yl2RBJW5 pic.twitter.com/jeiVnURzcB

“I never understood wind. You know, I know windmills very much. I’ve studied it better than anybody,” he said. (You can read the full White House transcript of his remarks here.)

He blasted windmills — it is believed he was referring to wind turbines — as being expensive to build, noisy, unattractive and bad for the environment.

“But they’re manufactured tremendous — if you’re into this — tremendous fumes,” he said. “Gases are spewing into the atmosphere.  You know we have a world, right?  So the world is tiny compared to the universe.”

Trump says he doesn’t understand wind then proved it. https://t.co/C52ItQpMwt

Ya, Trump never understood anything, about anything. This is the same guy that said you get cancer from windmill noise. 🤦‍♂️

The American Wind Energy Association has reported that while carbon emissions are created during windmill construction, most wind-power projects can eliminate the associated carbon footprint within six months or less, and then go on to provide decades of zero-emission energy. “In 2018, the electricity generated from wind turbines avoided an estimated 200 million tons of carbon pollution. This reduction is equal to roughly 43 million cars’ worth of CO2 emissions,” it notes on its site.

Indeed, wind power now provides a third or more of the electricity generated in some Southwest and Midwest states, the Associated Press recently reported, and big corporations are planning $70 billion in investment for the country’s first utility-scale offshore wind farms. The wind industry sustains 114,000 jobs — more than twice the number of jobs remaining in U.S. coal mining.

Read more: Trump’s hatred for windmills looms over one of the nation’s fastest-growing energy sources

Trump also hammered the alternative energy source over the weekend for destroying the bird population — referencing the iconic American bald eagle, in particular:

‘You know, in California, they were killing the bald eagle. If you shoot a bald eagle, they want to put you in jail for 10 years.  A windmill will kill many bald eagles. It’s true.’

He also accused wind farms of knocking down home values by 50% because they’re noisy and, again, threaten avian life. “You want to see a bird graveyard?  You just go. Take a look.  A bird graveyard,” he said. “Go under a windmill someday. You’ll see more birds than you’ve ever seen ever in your life.”

There is some debate about that. PolitiFact puts the number of eagles in California, which is not particularly noted for a bald eagle population, killed by wind turbines at around 100 a year. And a University of Illinois study released in October estimated that about 150,000 birds are killed by wind turbines in the U.S. each year, including birds that collide with the turbines as well as changes in bird habitats due to wind disturbances and other factors. Other estimates put the death of birds by wind turbine at between 20,000 and 573,000 a year. But that’s much lower than the estimated one to four billion birds killed by domestic cats in the lower 48 states each year.

This isn’t the first time Trump has targeted wind farms with a dramatic claim. Last year, he said that turbine noise “causes cancer,” a theory that’s been debunked by the American Cancer Society. And while speaking at the Shell Pennsylvania Petrochemicals Complex last August, he claimed wind power cuts off when the wind stops blowing.

“All of a sudden, it stops; the wind and the televisions go off,” Trump said in a speech in August. “And your wives and husbands say, ‘Darling, I want to watch Donald Trump on television tonight. But the wind stopped blowing, and I can’t watch. There’s no electricity in the house, darling.’ ”

Tom Kiernan, chief executive of the American Wind Energy Association, told the Washington Post in August that “the wind industry is powering the economy in rural America.”

“It’s hard,” Kiernan added, “to fully understand the motivation of the president.”

It should be noted that in 2015, Trump lost a protracted legal battle to stop a wind farm from being built off the Aberdeenshire coast in Scotland, where he was developing a golf course. He had argued the turbines would ruin the view and lower his revenue.