Home
Market
Defying gravity? What could bring U.S. stocks down to earth
Prev Article Next Article
This post was originally published on this sitehttps://i-invdn-com.akamaized.net/trkd-images/LYNXMPEG050DV_L.jpg 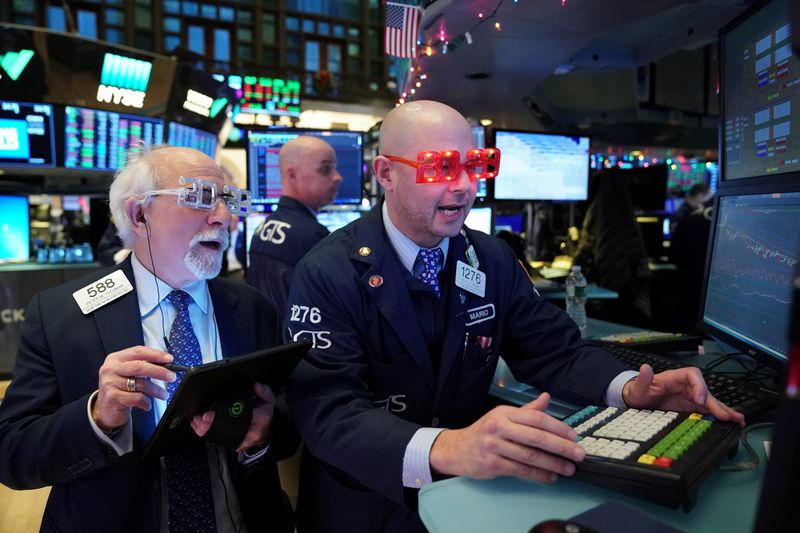 NEW YORK (Reuters) – The U.S. stock market’s relentless drive higher has caused some nail-biting on Wall Street that the rally is about to end. Geopolitical risks – such as the latest escalation of U.S. tensions with Iran – are just one on a list of worries for 2020.

Some investors are now increasingly nervous that the year-end “melt-up” in shares will turn into a scary melt-down.

Here are some of the risks preoccupying Wall Street as the 2020 gets under way:

The stock market’s stunning 2019 gains came despite a lackluster year for corporate profit growth, but performance may suffer if earnings lag in 2020.

Fourth-quarter reporting season starts in the coming days and results are expected to be anemic, with S&P 500 earnings seen down 0.3%, according to Refinitiv data.

But analysts expect S&P 500 earnings to rise 9.7% in 2020. There are some skeptics, notes Chuck Carlson, chief executive at Horizon Investment Services in Hammond, Indiana, who said bears are “still having some negative thinking that corporate profits aren’t going to be all that great (in 2020) because the economy is probably going to be a little softer.”

Indeed, data on Friday showed the U.S. manufacturing sector contracted in December by the most in more than a decade.

An initial U.S.-China trade agreement provided a year-end boost for stocks, but any hitch in the Phase 1 deal between the world’s two largest economies could rattle markets.

“The rivalry between the U.S. and China hasn’t gone away,” Mark Haefele, chief investment officer at UBS Global Wealth Management, said in a recent note.

“Investors will be alert for any sign that tensions are re-emerging, or either side is dissatisfied with the implementation of the Phase 1 agreement,” Haefele said.

Some point to the Federal Reserve as a trigger.

“When the Fed injects money, funds generally flow to the best-returning market,” said analysts at Bianco Research in a recent note. “The big question is, what happens when the Fed ends T-bill purchases and repo support,” said Bianco.

In October, the Fed announced that it would start buying about $60 billion per month in Treasury bills to ensure “ample reserves” in the banking system, a program that would continue at least until the second quarter. The Fed would also continue to support the short-term lending markets by offering daily operations in the market for repurchase agreements, or repo.

“Be wary of a correction in the first half as Fed balance sheet increases wane,” said Andrew Brenner, head of international fixed income at NatAlliance Securities, in a note.

Markets will increasingly focus on the U.S. presidential race as Democratic primaries begin next month and the general election in November draws closer.

Several prominent investors have warned of steep stock declines should a progressive candidate secure the Democratic nomination and defeat President Donald Trump. Of particular concern is if Democrats sweep the presidency and both houses of Congress, paving the way for major policy overhauls.

Investors currently see little market risk from the impeachment of Trump. That could change if U.S. senators in Trump’s own Republican party begin defecting against him in significant numbers in the Senate trial.

As the market soared in 2019, so did investor bullishness about equities despite rising valuations, a potential sign to be wary.

According to the AAII Investor Sentiment Survey, bullish sentiment rose in the Dec. 19 reading to its highest level since October 2018, just before the market endured a year-end swoon. Such bullishness has since pared back to around historical averages.

“Some of the sentiment readings have turned pretty aggressively,” said Horizon’s Carlson. “While we may not be there yet, that would be something to watch as we go into the early part of 2020, is ‘are we getting a little too excited or too ebullient on this market.’”

GEOPOLITICAL TENSIONS AND AN OIL SHOCK

Stocks were hit on Friday and investors moved into safe-haven assets after a U.S. air strike in Baghdad killed Iran’s most prominent military commander.

“Geopolitics has come back to the table and this is something that could have major cross asset implications,” said Salman Ahmed, chief investment strategist at Lombard Odier Investment Management in London.

Oil prices spiked Friday and a surge in the commodity remains a concern. Aside from the situation in Iran, Barry Bannister, Stifel’s head of institutional equity strategy, said Saudi Arabia may look to boost oil prices as it seeks to list ARAMCO on a larger exchange.

December saw WTI rise more than 10% and advance nearly 6%. With the () falling 3% in the fourth quarter, continued weakness could result in a further climb in crude prices, and stagflation may result if the dollar continues to weaken while crude prices continue to accelerate.

Beyond flaring Middle East tensions, Haefele of UBS notes that risks regarding Britain’s exit from the European Union have “abated, though not quite disappeared, and while his “base case is that a hard Brexit is avoided, this will likely remain a concern for investors in coming months.”