Home
Stocks
In One Chart: Republicans are already picking their favorite candidates for the 2024 election: more Trumps
Prev Article Next Article
This post was originally published on this site

Rick Wilson won’t be surprised by this chart.

The Republican strategist and fierce Trump critic — he wrote the book “Everything Trump Touches Dies: A Republican Strategist Gets Real About the Worst President Ever” — told the Los Angeles Times last month that the Trump name could remain in the White House well beyond even a second term for Donald Trump. “I honestly think Don Jr. or Ivanka will be the nominee in 2024,” Wilson said. “Because the party doesn’t care about any of the issues that used to drive the party. Now they care about Trump.”

Clearly, he’s not the only one thinking that way.

According to a recent SurveyMonkey poll, Republican voters recently chose President Trump’s kids as two of their top for picks for 2024.

Here’s the breakdown from Axios: 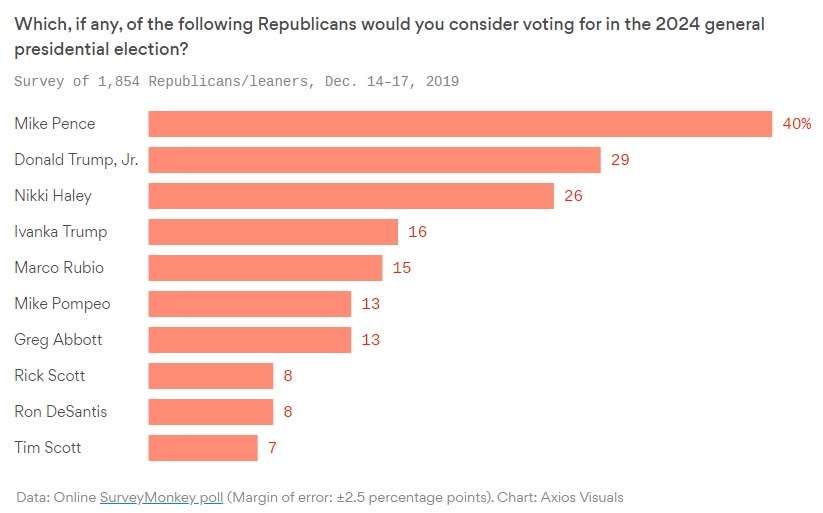 As you can see, Vice President Mike Pence tops the list, followed by the guy who just posted this picture, featuring an apparent line drawing of Hillary Clinton behind bars and other controversial symbology — on his Instagram account:

Axios explained that early polls are typically a measure of name ID, but they are also a “vivid illustration of just how strong Trump’s brand” among today’s self-identified Republican voters.

If one of Trump’s kids were to win the presidency in 2024, it would be the fourth time a direct descendant of a president became president.