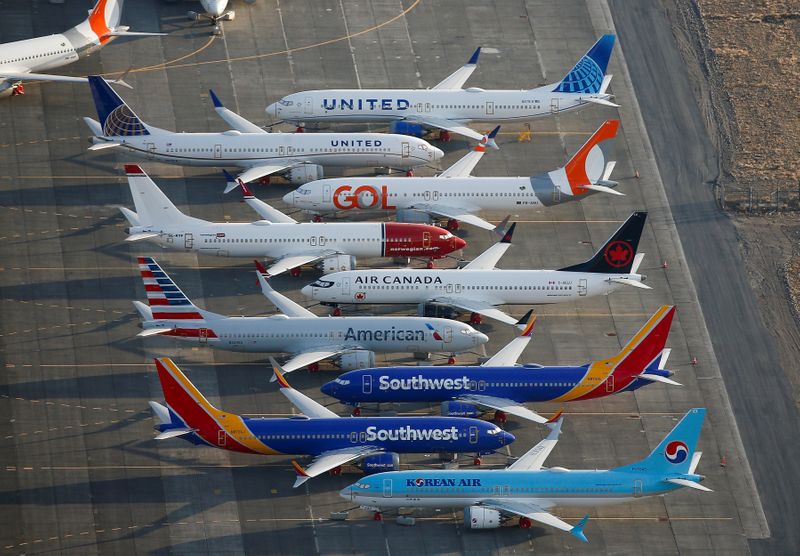 By David Shepardson and Tracy Rucinski

(Reuters) – Boeing Co (N:) said on Tuesday it was recommending that airline pilots undergo simulator training before they resume flying the 737 MAX, a shift from its previous position that pilots only needed computer-based training.

If U.S. and international regulators ultimately back Boeing’s proposal, it could take airlines longer to prepare their crews to fly the 737 MAX jets that have been grounded since March after two crashes that killed 346 people.

Boeing has been working on revised pilot training and software updates for the 737 MAX to win regulatory approval for the jets to fly commercially again.

After repeated setbacks, the U.S. Federal Aviation Administration (FAA) is not expected to give the greenlight until at least February, perhaps March or later.

Last year, the planemaker said it would propose that MAX pilots did not need to train on costly simulators, a position it originally used to market the latest version of its 737 narrowbody workhorse against competition from European rival Airbus SE (PA:).

Airlines that bought the MAX have had to cancel flights while the global fleet remains grounded.

If only computer-based training were required for renewed 737 MAX commercial flying, Boeing’s largest customer Southwest Airlines Co (N:) had said it would take one to two months to prepare its more than 9,500 pilots on the updates.

Southwest had not been part of Boeing’s recent discussions on pilot training recommendations and could not provide additional cost or timing estimates before there was specific guidance, spokeswoman Brandy King said.

Not many MAX simulators exist and it was unclear if training could be performed on the 737 NG simulator that 737 pilots have used until now. As of December, Toronto-based manufacturer CAE Inc (TO:) had delivered 23 MAX full-flight simulators, a spokeswoman said.

The FAA said on Tuesday it will consider Boeing’s recommendations during training evaluations of U.S. and international flight crew alongside regulators from Canada, Europe and Brazil.

Canada’s Transport Minister Marc Garneau, who has leaned toward mandatory simulator training for Canadian 737 MAX operators, said in a statement that Boeing’s signaling the importance of such training was “encouraging.”

U.S. and European aviation safety regulators are meeting with Boeing this week in an effort to complete a 737 MAX software documentation audit – an important step toward the eventual return to service.

Southwest and American are currently scheduling 737 MAX flights in April and United in June.