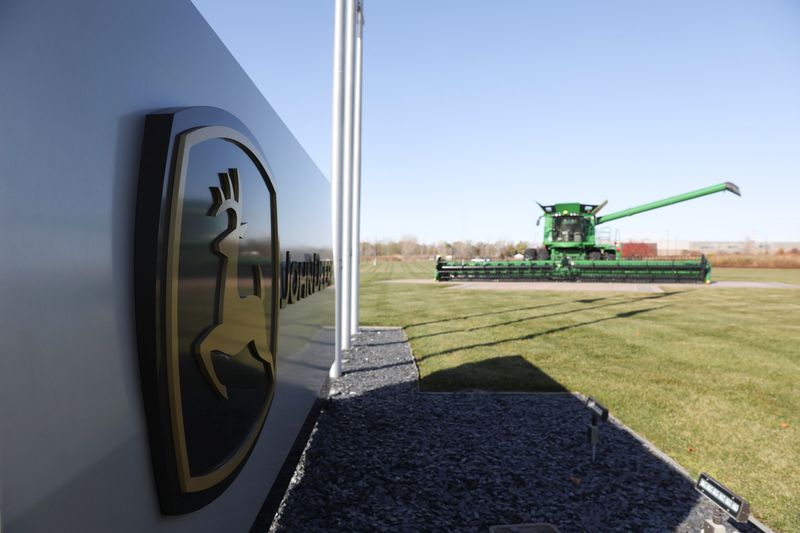 CHICAGO (Reuters) – Deere & Co . (N:) on Wednesday said it will cut costs and ramp up investment in data-driven agriculture technology and its services business to make itself more profitable.

In a pitch to investors, Chief Executive Officer John May said the measures are expected to boost operating profit margin to 15% by 2022 from 12.5% projected for this year.

The steps, outlined by the company’s new leadership, are part of a broader trend in the U.S. manufacturing sector which is facing its deepest slump in more than a decade.

In a bid to smooth earnings volatility, manufacturers such as Caterpillar (N:) are slashing costs and focusing on more profitable parts and services businesses.

May, who took over Deere’s reins in November, aims to shore up the company’s fortunes which have taken a hit from Sino-U.S. trade tensions as well as poor weather in the American farm belt that has slowed equipment purchases by farmers.

The Moline, Illinois-based company reported lower profits in the latest quarter and has warned of lower earnings this year.

U.S. President Donald Trump announced last month that China had agreed to double its pre-trade war purchases of U.S. agricultural products over the next two years as part of a Phase 1 trade deal. Still, Deere expects industry sales of farm equipment in the United States and Canada, its biggest market, to decline about 5% this year.

In response to weak demand, the company has cut production and laid off workers.

May said Deere is reviewing its overseas manufacturing footprint in markets that have peaked or where it has over-invested. He did not provide the names of those facilities.

The company is also carrying out a voluntary separation program for its salaried employees, now projected to result in savings of $120 million, lower than $150 million estimated earlier.

May expects the cuts to add 1 percentage point to Deere’s profits by 2022.

The company is aiming to get a similar profit boost from investments in data-driven farming, known as precision agriculture, which enables farmers to plant according to the fertility of the soil, helping reduce input costs and enhance yields.

Similarly, it is betting on its parts and maintenance services business to contribute 50 basis points in added profits over the next two years. The segment currently accounts for a fifth of the company’s sales.