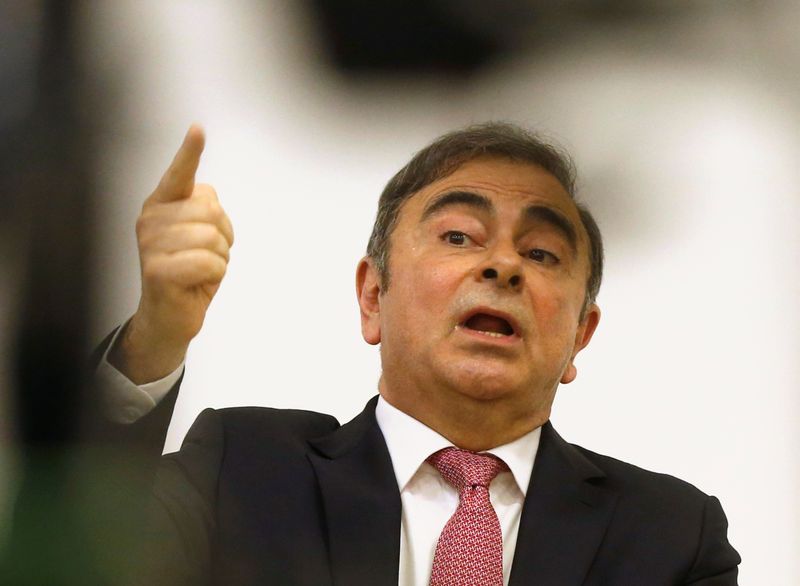 By Laila Bassam and Chang-Ran Kim

BEIRUT/TOKYO (Reuters) – Carlos Ghosn’s lawyer said he was “very comfortable” with legal proceedings in Lebanon on Thursday, after the fugitive ex-Nissan boss was questioned over an extradition request from Japan where he faces financial misappropriation charges.

Ghosn fled Japan to Lebanon, his childhood home, last month as he awaited trial on charges of under-reporting earnings, breach of trust and misappropriation of company funds, all of which he denies.

His dramatic escape has raised tension between Japan and Lebanon, where Ghosn slammed the Japanese justice system at a two-hour news conference on Wednesday, prompting Japan’s Justice Minister to launch a rare and forceful public response.

After questioning in Beirut about Japan’s Interpol warrant, two judicial sources said the prosecutor had imposed a travel ban, a step Carlos Abou Jaoude, a Beirut-based lawyer for Ghosn, described as procedural to broadcaster Al Jadeed.

Lebanon has no extradition agreement with Japan.

“He (Ghosn) is very comfortable with the path,” Jaoude told another broadcaster, MTV, adding that Ghosn was also comfortable in himself “especially after what he went through”.

Ghosn said later he was more comfortable with the Lebanese judiciary than that of Japan. “I will fully cooperate,” he told broadcaster LBCI.

He also said he did not want to put pressure on Japan-Lebanon bilateral ties, two days after Japan’s ambassador to Lebanon requested greater cooperation from President Michel Aoun in dealing in the case.

One of the judicial sources said authorities had asked Japan for its file on Ghosn, including the charges against him, and would not question him again until the information is received. Ghosn would surrender his French passport on Thursday, he said.

Japan’s Justice Minister Masako Mori said Ghosn’s allegations that he had had “zero chance” of a fair trial in Japan were unfounded.

“Defendant Ghosn was looking to justify his unlawful exit from Japan by propagating a false recognition of our justice system,” she said at the second of two news conferences, the first of which was held shortly after midnight.

“I felt that we needed to respond immediately to broadcast a correct understanding to people around the world.”

Ghosn’s arrest after his private jet touched down in Toyko in November 2018 shook the global auto industry and jeopardised the Renault-Nissan alliance of which he was the mastermind.

The Brazilian-born executive said on Wednesday he had escaped to Lebanon to clear his name and was prepared to stand trial anywhere he could get a fair hearing.

Ghosn has also said he was ready to stay for a long time in Lebanon and a source close to the 65-year-old has said his legal team is pushing for him to be tried in the country.

The decision by Lebanon’s prosecutor, Judge Ghassan Ouiedat, after Ghosn’s questioning at Beirut’s Justice Palace requires Ghosn to keep the authorities informed of his place of residence, the judicial sources said.

Ghosn was also questioned over a formal legal complaint filed by a group of Lebanese lawyers who accuse him of “normalisation” with Israel over a visit he made there in 2008.

The prosecutor released him with the same condition, that he keep the authorities aware of his place of residence, the sources said.

Ghosn said on Wednesday he had made the trip as a French citizen and an executive of Renault (PA:) to sign a contract with a state-backed Israeli firm to sell electric vehicles, and had been obliged to go because the board had requested it.

He said he had apologised for the trip and had not meant to hurt the people of Lebanon, which deems Israel an enemy state.

During the visit, Ghosn met Ehud Olmert, who was Israel’s prime minister at the time of the 2006 war between Israel and the Iranian-backed Lebanese group Hezbollah.