Home
Market
Supporting Trump Tariffs, One Exemption at a Time
Prev Article Next Article
This post was originally published on this sitehttps://i-invdn-com.akamaized.net/news/LYNXNPEE561E3_M.jpg 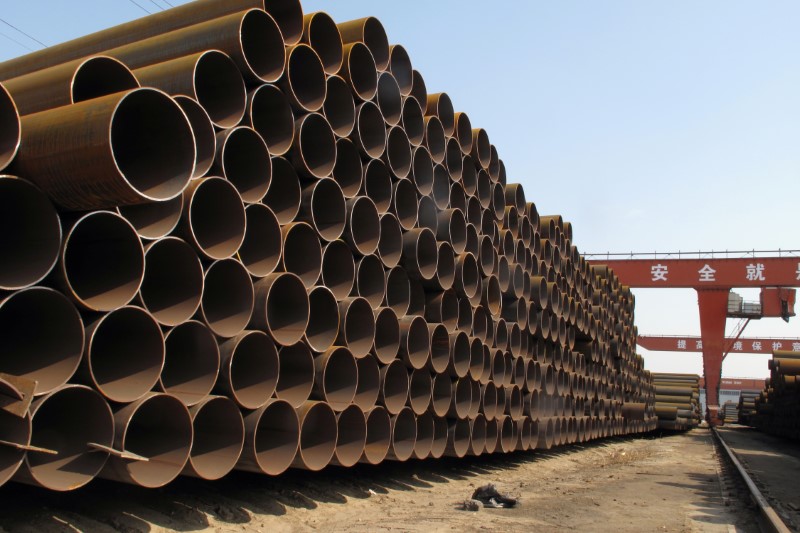 © Reuters. Supporting Trump Tariffs, One Exemption at a Time

(Bloomberg Opinion) — Robert Wetherbee, CEO of steelmaker Allegheny Technologies (NYSE:) Inc., has penned an op-ed in the Wall Street Journal sporting a headline for the ages:

I Support Trump’s Tariffs But Need An Exemption

It’s tough to know if this is merely a straight summation of the piece (which it is) or the pointed effort of some wag on the copy desk. Either way, as pithy distillations of the tricky trade-offs of tariffs go, it is tough to beat.

Allegheny’s management wasn’t always so down on the trade war. Back in the summer of 2017, some months before President Donald Trump imposed tariffs on steel and aluminum imports, Wetherbee’s predecessor Richard Harshman told analysts on an earnings call that tariffs held “direct upside potential” for the company.  By early 2018, however, it became clear that semi-finished slabs from Indonesia needed by Allegheny’s A&T stainless-steel joint venture were swept up by the new trade broom. The company filed for an exemption in March of that year, a request that was denied last April.

Wetherbee’s op-ed looks like another attempt, albeit with different paperwork. After acknowledging the wisdom of Trump’s approach in broad terms (read the headline), it then calls tariffs “blunt instruments” that will force the closure of a Pennsylvania plant, risking 300 direct and indirect jobs in a “vital swing state.” (That sound you just heard is the sledgehammer of subtlety being hurled at the Oval Office.) It goes on to say that only three companies in the U.S. produce those slabs, but that doesn’t help because they are direct competitors who have “zero interest” in helping Allegheny prosper (which sounds par for the course, really). The piece closes with a plaintive “Mr. President, we implore you: Save our jobs.”

On the one hand, the U.S. has legitimate trade grievances with China, and commodity industries such as steel are at the bleeding edge of that. Utilization at steel plants has risen since the trade war began, according to a recent report from ClearView Energy Partners.

On the other hand, decades of globalization championed by the very superpower now decrying it have created webs of supply chains that are fiendishly hard to unravel. Case in point: Indonesian semi-finished slabs — who knew? Hence, while everyone in the chosen field supports the blunt instrument in principle, the complex realities beneath demand an edifice of waivers be built, with tariffs generally agreed to work best when they affect one’s competitors only.

Leaving aside Allegheny’s specific woes, the price of protecting steelworkers from foreign competition via tariffs is, as with most any product, higher prices for consumers. In our populist age, that is a price Americans may be willing to vote for again. Besides that gorgeous headline, Wetherbee’s op-ed is a timely reminder that the recent sigh of relief in financial markets about the phase one trade agreement with China looks premature. Given the depth and breadth of the Sino-U.S. rivalry — with geopolitical aspects far beyond mere tariffs and bipartisan antipathy to Beijing — the deal is more partial ceasefire than treaty.

Moreover, it has sprung up in the middle of Trump’s impeachment saga and the final stretch of the 2020 election. It’s very hard to predict how the president will balance a desire to keep stocks humming with an impulse to deliver on years of tough talk about Beijing. Speaking publicly on Thursday morning, he mentioned again the notion that “phase two” might have to wait until after November. For anyone worried, call your representative. Or write an op-ed.