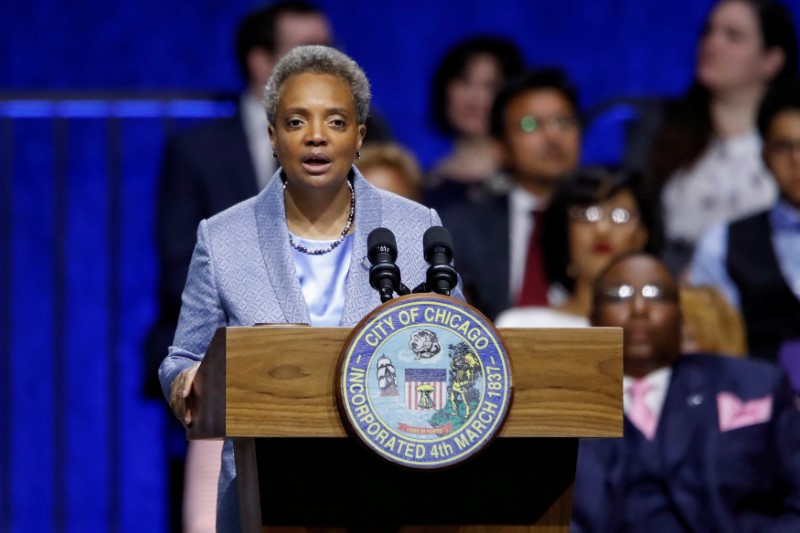 CHICAGO (Reuters) – Chicago will gain $40 million in additional upfront savings from a bigger bond refunding aimed at plugging a huge hole in the current budget, the mayor’s office announced on Tuesday.

A planned $1.26 billion refunding this week of outstanding debt was increased to $1.47 billion to accommodate $374 million of bonds Chicago expects to repurchase from investors as a result of the city’s first tender offer, according to the announcement.

Savings from a bond refunding was the biggest piece of Mayor Lori Lighfoot’s plan to tackle an $838 million deficit in Chicago’s fiscal 2020 budget. The city now expects to add $40 million to a previously estimated $210 million in one-time savings.

“Building on the passage of the 2020 city budget, the tender is another example of many steps taken by the Lightfoot administration to reduce costs and find efficiencies to address our fiscal challenges,” a statement from the mayor’s office said.

But he added that the city’s plan to alleviate budget pressures by capitalizing the interest “is not good debt practice.”

Starting on Wednesday, Chicago will refund tax-exempt and taxable general obligation (GO), motor fuel tax revenue, and infrastructure trust debt through a team of underwriters. Most of the refunding will flow through the city’s Sales Tax Securitization Corporation as new second lien bonds.

S&P Global Ratings has assigned an AA-minus rating to the second lien bonds, which is several notches higher than the BBB-plus rating it gave to GO bonds the city is refunding outside of the corporation.

The tender offer, which was launched on Dec. 23, targeted $1.8 billion of outstanding Chicago GO bonds.