Home
Stocks
Capitol Report: Trump’s impeachment: Here’s what happens next as John Roberts swears in senators for trial
Prev Article Next Article
This post was originally published on this site 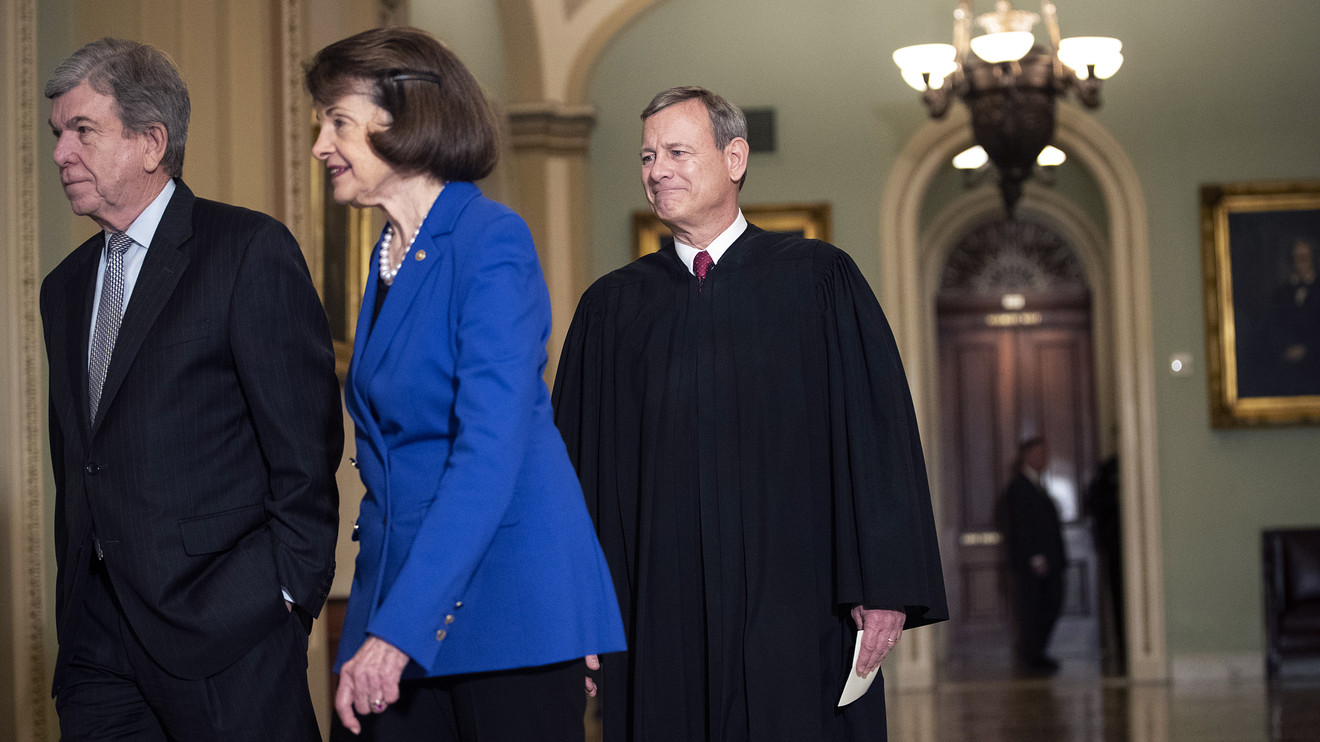 The Republican-led U.S. Senate is getting its chance to consider the charges against President Donald Trump, now that the Democratic-run House has sent over articles of impeachment, ending a stalemate that lasted for nearly a month.

An impeachment trial in the Senate is expected to start in earnest on Tuesday, after the Martin Luther King Jr. holiday.

Chief Justice John Roberts, who is presiding over the Senate trial, was sworn in by the chamber’s most senior Republican, Sen. Chuck Grassley of Iowa, known as the Senate’s president pro tempore. Roberts then swore in the senators, who will act as jurors in the trial, and said the proceedings were adjourned until 1 p.m. Eastern Time Tuesday.

There was also a notable development in the case against Trump on Thursday, as the nonpartisan Government Accountability Office said the White House’s budget office broke the law last summer by withholding funds meant for Ukrainian security assistance. The withholding of the aid for Ukraine is at the center of Democrats’ efforts to remove Trump from office. An Office of Management and Budget spokeswoman said OMB disagreed with GAO’s opinion.

As the trial gets going next week, the House’s seven impeachment managers will serve as prosecutors, while the president’s lawyers defend him. The managers are two powerful committee chairmen, Rep. Adam Schiff of California and Rep. Jerry Nadler of New York, as well as Rep. Zoe Lofgren of California, Rep. Hakeem Jeffries of New York, Rep. Val Demings of Florida, Rep. Jason Crow of Colorado and Rep. Sylvia Garcia of Texas.

Senate Majority Leader Mitch McConnell, the Kentucky Republican, has not agreed to repeated Democratic requests that he commit to having new witnesses and documents appear at the trial. Instead, rules for the trial reportedly could call for a vote on witnesses and documents, but only after opening arguments and a period for written questions.

Related: Republicans and Democrats still at impasse on Trump’s impeachment trial in Senate

Senate Minority Leader Chuck Schumer, the New York Democrat, reiterated his party’s demands on Thursday in a floor speech. “We must have witnesses, documents in order to have a fair trial,” Schumer said.

McConnell, for his part, criticized House Speaker Nancy Pelosi for handing out souvenir pens on Wednesday after she signed impeachment documents. “This final display neatly distilled the House’s entire partisan process into one perfect visual,” McConnell said on Thursday.

The impeachment trial looks likely to still be underway on Feb. 4, when Trump has been scheduled to deliver the annual State of the Union address before a joint session of Congress. It also appears on track to hamper the election campaigns of four Democratic senators who are running to be their party’s presidential nominee, keeping Bernie Sanders, Elizabeth Warren, Amy Klobuchar and Michael Bennet away from Iowa ahead of the state’s first-in-the-nation caucuses on Feb. 3.

See: Here are the dozen Democrats running for president

The Democrats’ push to remove the president from office centers on Trump’s pressure on Ukrainian President Volodymyr Zelensky to announce investigations into Democratic presidential candidate Joe Biden and his son, as well as into a theory that Ukraine interfered in the 2016 presidential election.

Trump has frequently criticized Democratic lawmakers for their efforts. He tweeted on Wednesday that their actions were a “Con Job” and said in a fiery December letter to Pelosi that “more due process was afforded to those accused in the Salem Witch Trials.”

Trump, charged with abuse of power and obstructing Congress, is only the third American president to have been impeached, joining Andrew Johnson and Bill Clinton. Richard Nixon resigned before an impeachment vote could take place.

But impeachment by the House doesn’t mean removal from office. Neither Johnson nor Clinton was found guilty in impeachment trials in the Senate, and the same outcome is widely expected in the impeachment of Trump, whose Republican Party occupies 53 of the chamber’s 100 seats. That helps explain why the stock market DJIA, +0.67% SPX, +0.59% hasn’t reacted much to impeachment-related developments. A two-thirds majority of senators is required to vote to convict Trump to remove him from office.

Opinion: For the stock market, impeachment is just a sideshow

And read: Why investors are so calm about impeachment — and what it would take for that to change