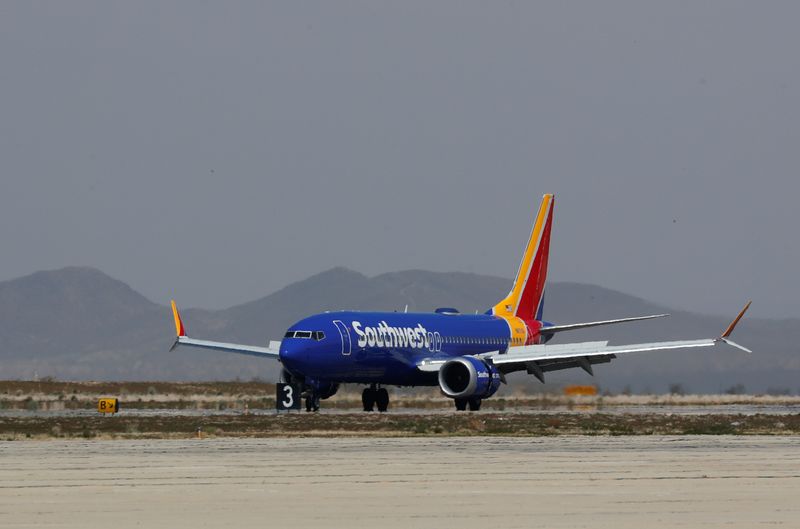 CHICAGO (Reuters) – Southwest Airlines Co (N:) reported a 21% fall in fourth-quarter profit on Thursday due to Boeing 737 MAX costs and warned that it will likely extend flight cancellations beyond June as the jets look set to remain parked well into this year.

The profit figure was below a Wall Street consensus forecast for $1.09 per share, mainly because Southwest said it treated a $124 million profit-sharing payment to employees that stemmed from a partial compensation agreement with Boeing last month as an operating expense while most analysts treated it as a one-time item.

“I am pleased with the Boeing agreement for 2019. But, we continue to incur financial damages in 2020, and we will continue discussions with Boeing regarding further compensation,” CEO Gary Kelly said.

Southwest has estimated a $828 million hit to operating profit from the MAX groundings in 2019. The airline has not factored future settlements into its 2020 outlook.

Total operating revenue rose 0.4% to $5.7 billion in the quarter, sustained by healthy travel demand — which it sees continuing in the first quarter — even as the company had to scale back its growth strategy due to a lack of airplanes.

Seat capacity fell 1.6% in 2019 from a year earlier versus an original plan to grow capacity by nearly 5%.

The airline had 34 MAX jets in its fleet at the time of the grounding and dozens more on order.

With the jets grounded, Southwest expects capacity to fall between 1.5% and 2.5% in the first quarter. It did not make a full-year estimate given continued MAX uncertainty.

Boeing said on Tuesday it does not expect to win approval for the 737 MAX to fly again until mid-year as regulators continue to scrutinize software and flight control updates and debate new pilot training requirements.

Based on that guidance, Southwest plans to take delivery of 27 MAX jets in 2020, though it warned the number could change and said it continues to plan for multiple return-to-service scenarios.

Southwest sees revenues per mile flown growing between 3.5% and 5.5% percent in the current quarter, though unit costs excluding fuel and profit-sharing expenses are seen spiking between 6% and 8% in the quarter.

Unit costs rose 5% in the fourth quarter versus the company’s original estimate of a 2% decline before the MAX grounding, which is also hitting the company’s fuel-efficiency.