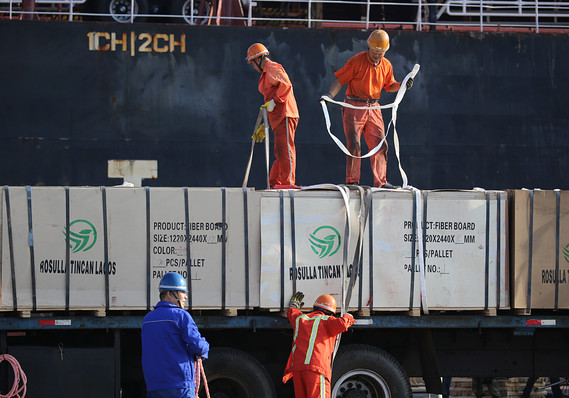 The U.S. trade deficit is going to show a big increase in December.

The numbers: The U.S. trade deficit in goods jumped 8.5% in December as tensions with China eased and imports surged, potentially signaling somewhat slower growth in the fourth quarter.

The gap in goods climbed to $68.3 billion in the final month of 2019 from $63 billion in November, the government said Wednesday.

Economists polled by MarketWatch had estimated a $65.6 billion deficit in goods. The wider deficit could spur Wall Street forecasters to trim their forecasts for U.S. economic growth in the fourth quarter below 2%. Bigger deficits subtract from GDP.

Advance figures for wholesale trade, meanwhile, slipped 0.1% while retail inventories were unchanged in December. They were also weaker than expected.

What happened: Exports of goods rose 0.3% in December, but imports shot up 2.9%.

Imports had fallen in the prior two months as companies sought to time shipments based on the prospects of higher tariffs between the two countries amid an ongoing trade fight. Economists were expecting the deficit to rebound in December, but the increase was larger than forecast.

The government will release overall trade numbers for December next week, but the size of the trade deficit is closely tied to changes in exchanges of goods. Trade patterns involving services such as banking and tourism rarely change much from month to month.

Big picture: The bigger trade deficit in December could prompt Wall Street forecasters to trim estimates for U.S. economic growth in the fourth quarter. Yet it doesn’t show any fundamental change in the nature of an economy that’s growing a modest 2% or so.

Market reaction: The Dow Jones Industrial Average DJIA, +0.66% and S&P 500 SPX, +1.01% were set to rise in Wednesday trades for the second straight day as investor worries over the coronavirus have eased a bit.