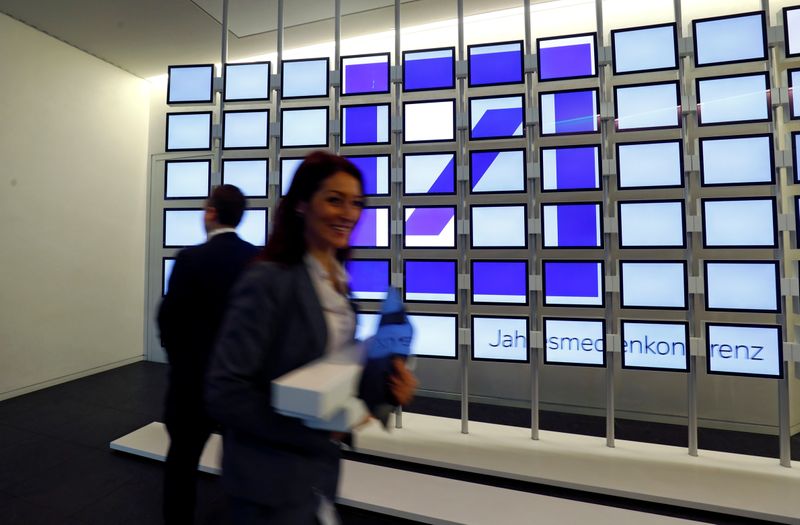 By Tom Sims and Patricia Uhlig

FRANKFURT (Reuters) – Deutsche Bank (DE:) plunged to a bigger than expected loss of 5.7 billion euros ($6.3 billion) last year, its fifth in a row, as the cost of its latest turnaround attempt hit earnings.

Misconduct scandals, a failed attempt to take on Wall Street heavyweights and, more recently, an aborted merger with Commerzbank (DE:) mean Germany’s biggest bank is still in recovery mode more than a decade on from the global financial crisis.

The latest attempt, under CEO Christian Sewing, is a 7.4-billion euro drive to cut 18,000 jobs, shrink its investment bank and focus on corporate as well as private banking.

But its efforts are being hindered by a faltering global economy and ultra-low euro zone interest rates.

“Our new strategy is gaining traction,” Sewing said on Thursday, noting revenues had stabilized in the second half of 2019, cost cutting was on track, the bank’s capital position had improved and the net loss was entirely down to revamp costs.

“While capital was a positive surprise, weak core operating trends could lead to further Core Bank downgrades, leaving Deutsche Bank’s share price vulnerable after a good start to the year,” Credit Suisse (SIX:) analysts wrote in a note, referring to the businesses seen as central to Deutsche’s future.

The bank’s shares fell almost 3% in early trade, but had recovered to trade a fraction higher at 0920 GMT.

The results conclude a turbulent decade for Deutsche, including a cumulative loss of 15 billion euros over the last five years and an 82% plunge in the shares over the decade.

In contrast, U.S. rival JPMorgan Chase (NYSE:) & Co. posted its biggest-ever profit last year as its bond trading business bounced back in the last quarter of the year.

For analysts and investors, Deutsche’s ability to generate revenue has been a major concern. The bank has repeatedly trimmed its forecasts.

Revenue fell 4% in the fourth quarter to 5.3 billion euros and was down 8% for the year to 23.2 billion euros.

The quarterly figure included a 5% drop in corporate banking and a 4% decline at the private bank. The investment bank’s cash-cow bond trading arm saw a 31% jump, a big improvement on recent quarterly falls, but less than gains at some U.S. banks.

“For us Deutsche Bank remains a ‘show me’ stock on revenues and we need evidence in future quarters to give credit on revenue turnaround,” JP Morgan Cazenove analysts said in a note.

Deutsche is aiming for annual revenue of 24.5 billion euros by 2022.

Sewing said the bank was feeling the benefits of its restructuring plan this month, and was bullish about 2020.

“We will shift our focus over to growth. We don’t just want to defend our market position; we want to build on it,” he said.

“We’re going on the offensive and we intend to sustain it. But not everywhere, just in those areas where we are relevant and have a leading position.”

Deutsche said it was making good progress on reducing costs, another focus for investors, with global employee numbers down by more than 4,100 last year to 87,597 full-time equivalents.

The bank said on Wednesday it would halve 2019 bonuses for individual board members, and told staff this week it would delay salary raises by a few months.

Now in its 150th year, Deutsche is considered one of the global financial system’s most important banks, but has been hit by a string of misconduct scandals.

Seeking to repair relations with Berlin and the general public, it last week appointed to its supervisory board former German government minister Sigmar Gabriel, who once criticized the bank for a business model built on speculation.