Home
Stocks
Lawrence G. McMillan: All these stock-market signals are looking bearish
Prev Article Next Article
This post was originally published on this site

Stocks have broken their uptrend and are trying to bounce off a critical level in the S&P 500 index at 3,210.

The huge rally in stocks that began on Oct. 4 is in jeopardy. A couple of large down days have broken the steepness of the uptrend, but not the uptrend itself. The S&P 500 SPX, +1.04%   would have to make break below last week’s support levels at 3,210 to truly turn the chart bearish.

As it is, the S&P 500 broke down sharply on Jan. 24, Jan. 27 and Jan. 31 — especially the latter two dates. The selling on Jan. 27 left a gap on the chart that was quickly filled, but it turned a number of indicators negative. The reflex rally from there closed the gap, but only reached the now-flattening 20-day moving average. That’s a rather typical move for an oversold bounce.

So the S&P chart is weakening, but hasn’t completely capitulated to the bearish case yet. There is resistance at 3,340 (the all-time highs) and there is support, as noted, at 3,210. If it continues to bounce around in that range, it would just be “regenerating,” but a breakout in either direction should be significant. 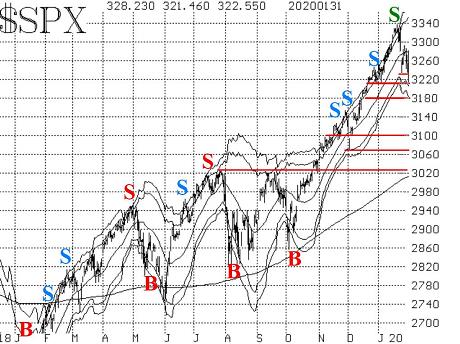 Equity-only put-call ratios remain on sell signals. The computer analysis programs had declared more than a week ago that these were on sell signals, and they were correct in that analysis. Now, however, the sell signals are more visible to the naked eye, as the ratios are rising. As long as they continue to rise, these sell signals will remain intact. Since they arose at such low (extremely overbought) levels on their charts, they should be strong sell signals. 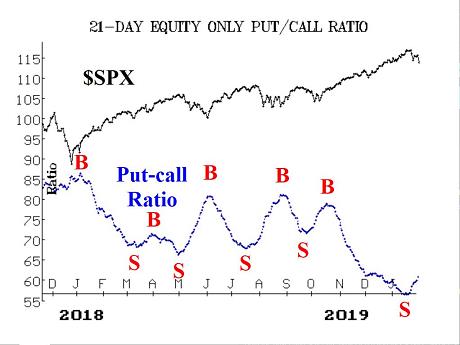 Market breadth has been poor. Since the S&P and the cumulative advance-decline lines both made new all-time highs on Jan. 16, there has only been one day of positive breadth in “stocks only” terms (there have been a few more in terms of NYSE data, which includes things other than stocks). As a result, both breadth oscillators remain on sell signals. However, they have reached oversold territory.

As an aside, there hasn’t been a “90% day” during this decline. In fact, there hasn’t been a 90% day in either direction since three 90% down days last August, when the market was bouncing around rather violently in a trading range. That demonstrates how much this is a “market of stocks,” in that many stocks do their own thing and don’t necessarily follow what the broad market is doing on a general basis. That’s not always the case (2008 was the opposite), but it is right now.

New highs are continuing to edge out new lows, for the most part. There still hasn’t been a single day on which NYSE new lows outnumbered new highs. When there is, that will be a sell signal. However, there have been a couple of days on which Nasdaq and “stocks only” new lows have edged out new highs.

While that was going on, VIX rose enough to enter “spiking mode” (that is, it rose more than 3 points over a three-day period, using closing prices). Once in “spiking mode,” a VIX “spike peak” buy signal occurs when VIX subsequently closes more than 3 points below the highest point that it reached while in “spiking mode.” That VIX “spike peak” buy signal occurred on Thursday’s close and is marked with a green “B” on the VIX chart. This signal would be stopped out on a VIX close above 19.02, and that almost happened right away on Friday. Otherwise it will remain in effect for 22 trading days, which is what our trading system dictates for these signals. 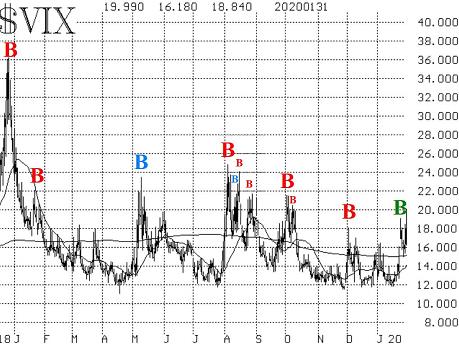 The construct of volatility derivatives has taken on a more negative slant as well. From time to time over the past week, the VIX futures have traded at discounts to VIX. More worrisome: the term structure has flattened and even briefly inverted. That is a more negative sign for stocks, although a one-day inversion is not a real problem.

The Cboe Volatility Indices’ term structure has followed a similar pattern. On Jan. 27, VIX closed above VIX3M, then subsequently fell back below VIX3M on Jan. 28. That is a “VIX crossover” buy signal. These are short-term signals, usually generating their best profits in the first five trading days.

So there are a few cross-currents among our mostly bearish indicators. Our broad market-predicting indicators are negative for the most part: there are sell signals in Bollinger Bands, equity-only put-call ratios, breadth oscillators, S&P realized volatility, and the trend of VIX.

That is enough for us to say that our “core” position is bearish. But the S&P chart hasn’t broken support, and we have seen times in the past that when the other indicators align but the S&P does not, it is usually the S&P that wins out.

Also, we are already seeing some countertrend bullish signals: the VIX “spike peak” buy signal, and the “VIX crossover” buy signal. This is a bit annoying, but typical. A year ago, in January 2019, all of our indicators were bullish and stayed that way for a couple of months. Such unanimity is unusual. More recently, we have had signals on both sides of the market.

Since our trading systems have good track records, we generally take all of the signals. I prefer not to try to predict in advance which indicator is going to work and which one isn’t. In general, it is my feeling that we can make money from most of these signals, even when they sometimes seem at odds, but our “core” position is bearish at this time.