Burger King parent Restaurant Brands International Inc. said during its earnings commentary on Monday that there was a comparable sales slowdown on its plant-based Impossible Whopper.

“While we did see a deceleration in comparable sales growth in the U.S. from the third into the fourth quarter, our core business continues to perform well and absolute sales levels remain very healthy,” said José Cil, Restaurant Brands chief executive, on the call, according to a FactSet transcript.

McDonald’s Corp. MCD, +0.77%   is currently testing its own version of a plant-based burger, the PLT, or plant, lettuce and tomato, in Canada made with Beyond Meat Inc. BYND, +2.83%

See: Beyond Meat might not be the only plant-based burger McDonald’s uses if it launches in the U.S.

Despite the zeal for plant-based foods at various restaurant chains, McDonald’s has been slower to add an item, which many experts say is in keeping for the fast-food giant.

Restaurant Brands’ QSR, +2.72%   Cil said price point for the Impossible Whopper has been a challenge to some diners.

“We know the premium price point has limited some guests from trying the Impossible Whopper, so in January we added the Impossible Whopper offer to our core two-for-six promotion,” he said. “The product clearly resonates with our guests and we plan to invest behind our leadership in the fast growing plant-based segment.”

Burger King plans to add new products to build on the Impossible Whopper, he added.

Premium pricing hasn’t seemingly been an issue for Dunkin’ DNKN, +0.15%  , which said last week that its plant-based Beyond Sausage sandwich is often paired with its espresso drinks or cold brew, boosting the average check to $9 when it’s ordered.

Dunkin’ says the Beyond Sausage sandwich skews toward younger customers, women, and customers on the coast.

Burger King same-store sales grew 2.8% for the quarter, with Cil noting that the chain was lapping traffic from 2018 when $1 nuggets and 89 cent pancakes were on the menu.

But it was the blockbuster showing at Popeyes, with fourth-quarter sales growth of 42% that stood out, thanks to the reintroduction of the chicken sandwich, which Restaurant Brands calls “transformational.” Sales at the chicken chain reached $1.33 billion with comparable sales soaring 34.4% for the quarter.

Cil said the company has seen a “significant increase” in interest for new Popeyes restaurants from franchisees in the U.S. Popeyes restaurant growth was 6.9%, bringing the total to 3,316 systemwide compared with 18,838 for Burger King.

Restaurant Brands other chain is Tim Hortons, which saw sales decline 2.9% during the quarter, to $1.68 billion, and comparable-store sales slip 4.3%.

See: Can Starbucks save the plant by cutting dairy? Activists and investors respond 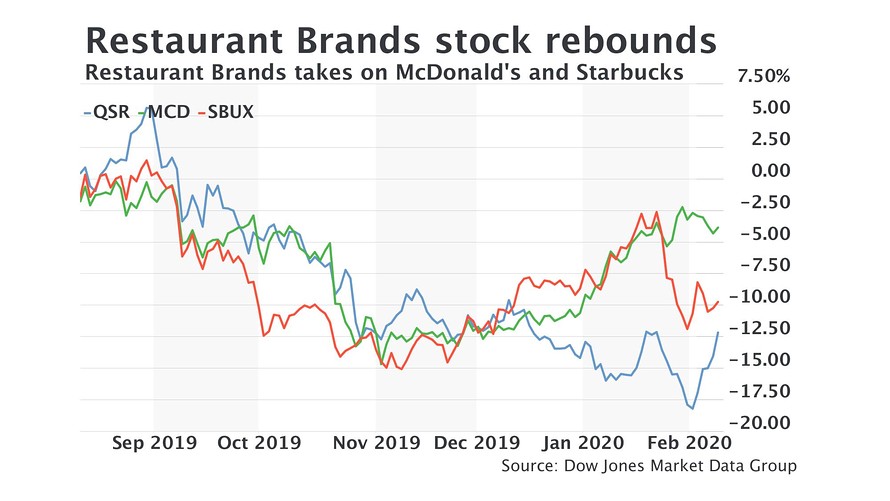 Restaurant Brands’ goal is to build 1,500 restaurants over the next decade, with executives talking up the prospects for Popeyes in China. As of 2019, China was about 2% of systemwide Burger King sales. Executives made little mention of the coronavirus on the call.

The bigger focus on the call was Tim Hortons.

“Our approach to product innovation and promotions over the last couple of years has led to disappointing results for the quarter and the year,” said Cil, who attributed much of the comparable sales decline to investments in membership and participation in the rewards program.

The plan going forward also includes a focus on core product, like coffee and breakfast.

“Based on our research, a substantial percentage of Canadian consumers prefer skim milk with their coffee and a growing percentage particularly among younger guests prefer nondairy alternatives like almond milk,” said Cil. “Up to this point, we have not offered these options to our guests and have lagged behind competitors.”

Don’t miss: Starbucks would’ve raised guidance if not for the coronavirus

Starbucks Corp. SBUX, +1.28%   announced in January that it would be adding more plant-based menu items, including an Oatmilk Honey Latte in 1,300 stores and a Coconutmilk Latte.