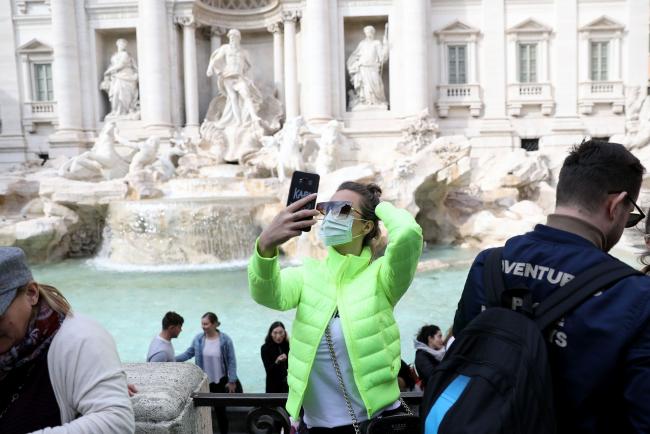 (Bloomberg) — U.S. President Donald Trump and federal health officials plan to brief the public Wednesday on efforts to prevent the spread of the coronavirus. A top American health official said that the increase in outbreaks outside China will make it harder to keep the virus outside the U.S., and the administration said it may ask for more funding to fight the virus.

Brazil confirmed an infection, the first in Latin America. Greece also reported its first case, Italy and Iran confirmed additional infections, and 700 people remained confined in a hotel in Tenerife, the Canary Islands.

Chevron Corp. (NYSE:) asked traders and other staff at its Canary Wharf office in London to work from home as a precaution after an employee was tested for the coronavirus.

Click VRUS on the terminal for news and data on the coronavirus and here for maps and charts. For analysis of the impact from Bloomberg Economics, click here.

Health and Human Services Secretary Alex Azar suggested the Trump administration may seek more money for a virus response than the $2.5 billion announced on Tuesday. He told a House panel Wednesday that the administration is planning to spend “at least” that amount and would work with Congress on a final figure.“We’re trying to be flexible,” he said in response to questions.Azar on Tuesday faced critical questioning about the administration’s response from members of both parties at congressional hearings on Tuesday. Democrats responded with their own plans to respond to the virus. Senate Democratic leader Chuck Schumer on Wednesday proposed $8.5 billion in spending for the virus response. House Speaker Nancy Pelosi called Trump response “meager, anemic,” and a Democratic aide said the House would vote on its own funding plan the week of March 9.

The U.S. State Department said travelers to Italy should exercise increased caution when traveling there because of the coronavirus outbreak in the region of Lombardy. The State Department notice tells people to take precautions but doesn’t suggest they cancel travel.

The department’s warning has been at Level 2 already because of terrorism risk.

A top American health official said that the spread of cases outside China will make it harder for the U.S. to keep the coronavirus outside its borders.

“Nothing has changed inside our country, but things have changed outside that may ultimately have an impact here,” Fauci said during a television interview Wednesday.

U.S. Senate Democratic leader Chuck Schumer is preparing a request for emergency coronavirus funding totaling $8.5 billion, according to a senior Senate Democratic aide. His request is expected to be finalized early Wednesday and sent to Appropriations committee members.

The Six Nations rugby match between Ireland and Italy, scheduled for March 7, has been called off. Ireland had on Tuesday recommended the match be scrapped on public health grounds.

The total number of cases in Italy rose to 378. Four infections were reported at a hotel in the coastal resort of Alassio in the Liguria region, which is in lockdown with an adjacent hotel, according to regional Governor Giovanni Toti. Some of the 147 tourists will be transferred and quarantined back home as they don’t show symptoms.

Brazil has confirmed the first coronavirus case in Latin America and will announce it shortly at a press conference, according to a person with direct knowledge of the matter.

A 61-year-old Brazilian who recently traveled to Northern Italy for work tested positive in a preliminary test, the Health Ministry said in a statement late Tuesday evening. A second round of tests have confirmed the diagnosis, said the person, who isn’t authorized to speak publicly ahead of the press conference.

Russia has stopped issuing visas to most citizens of Iran and is limiting flights to South Korea, as the country’s top public-health official warned of growing risks that the virus will spread in the country.

Authorities are also calling on Russians to refrain from visiting Italy and will extend restrictions already imposed on travel to China until April 1.

Though its shares a long land border with China, Russia has so far reported only two local cases of COVID-19, both involving Chinese nationals.

The White House has been emphasizing that the coronavirus is firmly under control in the U.S., though officials at the CDC have offered up more dire predictions about the virus’s eventual arrival in the U.S. and what the impact would be.

U.K. Health Secretary Matt Hancock said his focus for now is on containing the virus. Britain will roll out a wider public information plan in the coming days and an isolation facility has been set up at London’s Heathrow Airport.

De Beers is allowing its customers to refuse to buy diamonds that are particularly popular with consumers in China and Hong Kong as the coronavirus crisis hits demand in a key gem market, people familiar with the matter said.

Vietnam sees first-quarter growth in the manufacturing sector slowing to 6.28% year-on-year, compared with an earlier projection of 10.47%, if the virus outbreak continues until the end of March.

Italy’s coronavirus-linked deaths rose to 12 after a fatality was reported in the Emilia-Romagna region, the head of Civil Protection told a press conference. The total number of cases rose to 374, from 322 previously.

Global auto sales are forecast to decline 2.5% in 2020, compared with a previously projected 0.9% drop, Moody’s said in a report.

Weibo’s first-quarter business has been “significantly impacted” by the coronavirus outbreak in China, the social media platform said.

Retail sales fell 83% from a year earlier in the seven days through Feb. 23, the China Passenger Car Association said on Wednesday. The drop followed a 92% tumble in the first two weeks of February.

Italy said cases in Lombardy rose to 259 from 240. France said it found three more cases and reported a fatality.

Iran confirmed 44 new cases, taking its total to 139, and the death toll there rose to 19. Bahrain reported a total of 26 cases and shut schools for two weeks, while Kuwait has reported 18 cases so far. Standard Chartered (LON:) PLC warned Gulf economies will grow at a slower pace than estimated this year as the coronavirus hurts oil demand, trade and tourism.

The Markit iTraxx Europe Crossover index of credit-default swaps on high-yield companies rises for a third day on Wednesday to its highest since Aug. 23, as the relentless coronavirus spread threatens global growth. The index rose as much as 11.1bps to 268, following a 34-point climb this week.

With Thailand’s 40 total confirmed coronavirus cases, the country is at risk of entering “phase 3,” which is the highest level of outbreak advisory, the country’s health minister said.

Doctors in Japan are testing several drugs including Fujifilm Holding Corp’s anti-influenza drug Avigan on preclincal research to treat the new coronavirus, according to the health ministry.

Around 700 guests remained confined to their Canary Islands hotel as Spain stepped up efforts to contain the spread of the coronavirus. Italy and other European nations were on high alert.

The number of infections in Tenerife has risen to four after two more Italians at the hotel were found to have the virus. Separately, Madrid’s regional government has confirmed a second coronavirus case, Cadena Ser radio reported.

Diageo said the coronavirus will reduce sales by as much as $422 million this year after bars and restaurants were shut in many parts of China. Danone, which sells Evian water, cautioned that first-quarter sales growth will grind to a halt.

Hermes International (PA:) said it’s too early to predict when the Chinese market will recover as the spread of the coronavirus hammers luxury spending there. The French company closed 11 stores in China and has since reopened seven of those.

South Korea confirmed 115 more coronavirus cases, bringing total infections to 1,261. A week ago, the country had only 51 cases. The country is emerging as a second coronavirus hot spot in Asia, as the outbreak in China starts to show signs of plateauing. About two dozen countries have levied restrictions on travelers from South Korea, while flights and tour-group trips to the nation are being canceled.

The lack of strong containment measures from the South Korean government in the city of Daegu, where most cases are emerging, is sparking questions over whether the virus will continue to spread through the country.

A U.S. soldier stationed at a base near Daegu has tested positive, the first time a U.S. service member has been infected, the United States Forces Command said. U.S. Forces Korea raised the risk level to ‘high.’

More than one-quarter of businesses grappling with coronavirus in Asia say they’re setting up or using supply chains that reduce their reliance on China, according to a survey by the American Chamber of Commerce in Singapore.

The poll offers a glimpse into firms’ evolving strategies as confirmed cases of the virus accelerate in countries within and outside Asia, slamming global financial markets and forcing policy makers to unveil stimulus packages and monetary easing.

Japanese Prime Minister Shinzo Abe called for major sporting and cultural events to be called off, postponed or scaled down over the next two weeks, saying the move was crucial in preventing the domestic spread of the new coronavirus.

Abe introduced a new government plan on Tuesday to control the disease that called on employers to encourage telework and stagger working hours in an attempt to slow the spread of the disease.

One major concern facing Abe has been whether the virus will derail Tokyo’s plans to host the Summer Olympics later this year. Japanese and Olympic officials have said there is no change to holding the games as planned, but there is a lot at stake for Abe. Tokyo has been preparing for the games for about seven years, spending more than $26 billion to ready the city, according to some estimates.

Hong Kong Financial Secretary Paul Chan announced a HK$120 billion ($15.4 billion) relief package, in an effort to shore up economic confidence in a city battered by political unrest and the coronavirus. The main feature of Chan’s annual budget announced Wednesday is a payment of HK$10,000 to each permanent resident of the city 18 or older.

Carrie Lam’s administration is seeking to put a floor under the collapsing economy, rolling out a bolder budget than has been seen in recent years. Months of political unrest pushed Hong Kong last year into its first annual recession in a decade, with economists forecasting a second annual contraction in 2020 as disruptions from the coronavirus outbreak further depress the city’s output.

A 61-year-old man in Sao Paulo tested positive for the new coronavirus, in what can be the first case of the disease in Latin America. A counter-test is being made by Brazil’s reference hospital, Instituto Adolfo Lutz, the Health Ministry said in a statement published on its website and in its Twitter account.

The man traveled to Northern Italy for work Feb. 9 through Feb. 21, and has mild symptoms that match the ones of a suspected Covid-19 infection, the statement said.

China reported 406 new cases from the coronavirus, bringing the total number of cases in the country to 78,064. China’s death toll rose by 52 to 2,715, with all the fatalities occurring in Hubei province.

A total of 29,745 patients have been discharged from hospitals since the outbreak, the commission said. Hubei province, where the outbreak originated, reported 401 additional confirmed cases.

A medical research team in Singapore has managed to establish links between cases in the city-state using a new testing method.

Using a serological test developed by researchers from the Duke-NUS Medical School, the team was able to confirm that two individuals had earlier been infected with the coronavirus, also known as COVID-19, the Ministry of Health announced Tuesday. Serological tests identify antibodies in blood samples, which the immune system produces in response to an infection.