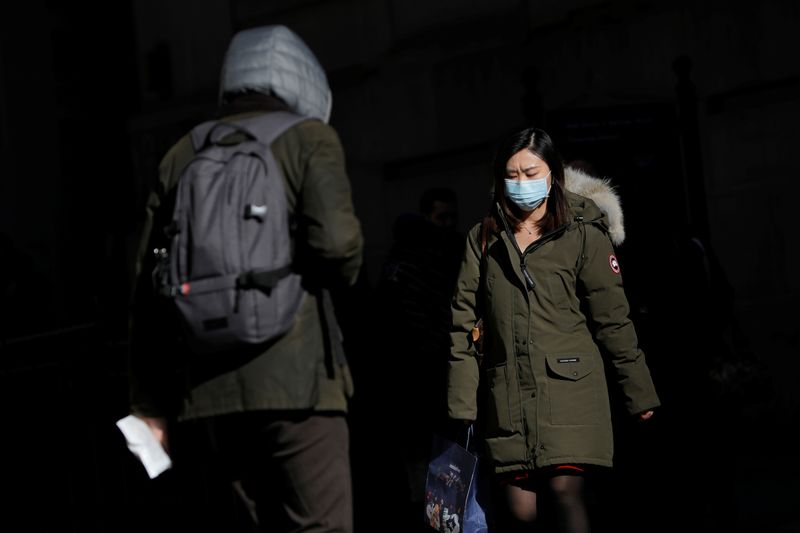 © Reuters. A woman in a face mask walks in the downtown area of Manhattan, New York City, after further cases of coronavirus were confirmed in New York

By Nathan Layne and David Morgan

NEW YORK/WASHINGTON (Reuters) – The number of people who have the novel coronavirus in New York state doubled to 22 on Thursday following an increase in testing, as Tennessee became the 14th U.S. state to report a case of the fast-spreading illness.

New York Governor Andrew Cuomo told a news conference that the expansion in testing came after the federal government approved its use of additional laboratories, boosting capacity to process tests. He said more testing would inevitably identify more cases.

“Those numbers are going to keep going up,” Cuomo said.

The U.S. Senate on Thursday passed an $8.3 billion bill to combat the outbreak, a day after the House of Representatives overwhelmingly approved it. The bill will now go to President Donald Trump for his signature.

More than $3 billion of the approved funds would be devoted to research and development of coronavirus vaccines, test kits and treatments. There are currently no approved vaccines or treatments for the fast-spreading illness that began in China and has infected more than 95,000 people in over 80 countries and territories.

Of the new cases in New York, eight are connected in some way to a Manhattan lawyer who lives in Westchester County and was previously diagnosed with the virus, two are in New York City and one in nearby Nassau County. The lawyer, who had an underlying respiratory illness, is recovering, Cuomo said.

Tennessee health officials said their first case was in an adult male in Williamson County. Williamson County schools will be closed for a deep cleaning on Friday and Monday, according to its official Twitter page.

The U.S. death toll from the COVID-19 respiratory disease caused by the virus stands at 11, all but one them in Washington state, which has a cluster of at least 39 infections in the Seattle area. The other death, announced on Wednesday, was in California.

The U.S. Centers for Disease Control and Prevention (CDC) on Thursday reported 149 confirmed and presumed U.S. cases, which includes those reported by states but not yet confirmed by the agency. They do not necessarily include new cases reported on Thursday.

U.S. health officials say they expect to be able to get enough privately manufactured coronavirus tests – around 1 million – to public laboratories this week with the capacity to test about 400,000 people.

CDC official Anne Schuchat said her agency would also supply testing kits by the end of the week that could test around 75,000 people.

“Right now, it is a challenge if you are a doctor wanting to get somebody tested,” U.S. Health and Human Services Secretary Alex Azar told reporters following a briefing with lawmakers in Washington.

According to the Association of Public Health Laboratories (APHL), labs in 44 states and the District of Columbia can currently test for coronavirus. States with labs not yet testing are Alabama, Maine, Ohio, Oklahoma, West Virginia and Wyoming. Labs in U.S. territories Guam, Puerto Rico and the U.S. Virgin Islands are also not testing yet, according to the APHL.

U.S. Vice President Mike Pence, who is leading the U.S. response, visited mask-manufacturer 3M Co (N:). He urged Americans not to purchase masks if they are healthy to free up supply for healthcare workers and people who are sick.

“Unless you are ill, you have no need to buy a mask,” Pence said at the Minnesota company, which has ramped up production to help respond to the coronavirus.

“The risk to the average healthy American from contracting coronavirus remains low,” Pence said, adding that “there will be more cases,” especially among more vulnerable populations such as seniors and those with chronic health conditions.

Global equity markets continue to tumble as the number of coronavirus cases outside China mounted, fuelling warnings that world growth is likely to reach its weakest level since the global financial crisis.

By mid-afternoon, the main U.S. stock indexes were down more than 3%.

Alphabet Inc’s (O:) Google on Thursday joined Amazon.com Inc (O:), Facebook Inc (O:) and Microsoft Corp (O:) in recommending employees in the Seattle area work from home, after some were infected with the coronavirus.

The companies’ work-from-home recommendation will affect more than 100,000 people in the area, as both Microsoft and Amazon employ over 50,000 each. Facebook employs more than 5,000 in the area and Google about 4,500, according to media reports.

California Governor Gavin Newsom declared a statewide emergency in response to the outbreak after state health authorities confirmed 53 cases, the most of any U.S. state.

(Graphic: Tracking the spread of the novel coronavirus – https://graphics.reuters.com/CHINA-HEALTH-MAP/0100B59S39E/index.html)