Home
Stocks
Dr. Fauci, U.S.’s top infectious-disease expert, is in favor of a national lockdown
Prev Article Next Article
This post was originally published on this site 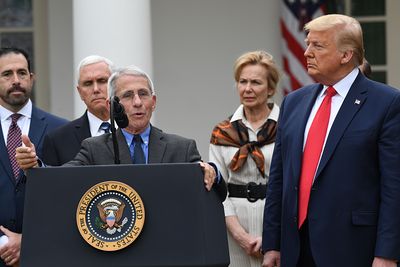 Americans should “prepare to hunker down more” at home, said Dr. Anthony Fauci, director of the National Institute of Allergy and Infectious Diseases.

A national lockdown is not out of the question to Dr. Anthony Fauci, the director of the National Institute of Allergy and Infectious Disease.

Asked on “Meet the Press” on Sunday if he is in favor of a 14-day national shutdown to slow the progress of the coronavirus, Fauci said, “You know I would prefer as much as we possibly could. I think we should really be overly aggressive and get criticized for overreacting.”

On CNN, he said this: “I would like to see a dramatic diminution of the personal interaction that we see in restaurants and in bars.”

For now, different states and localities are taking their own actions to contain the spread of the coronavirus.

Unlike in Italy, Spain and France, restaurants and bars remain open in the U.S. even as social-distancing efforts are ramped up. “Obviously, you’re going to have people going to restaurants anyway,” Fauci said on NBC’s “Meet the Press.” This was certainly the case across several cities in the U.S. this weekend where there were lines out the door to get into bars.

NBC’s Chuck Todd pressed Fauci, who has served in his capacity under presidents of both parties and is a key member of the Trump administration’s coronavirus task force, to explain why all the states neighboring Indiana have closed schools but Indiana has not.

“Don’t even for a second think that I’m saying we shouldn’t,” Fauci said in regard to shutting down schools across the country. “I like to be criticized [as], ‘Oh you’re being too overactive’ — that’s good for me.”

The curve Fauci mentioned refers to strategies aimed at stretching the duration of the deadly illness so that public health services aren’t overwhelmed by patients requiring critical aid.

To stop this from happening, Teaneck, N.J., Mayor Mohammed Hameedudd ordered all of the town’s 41,000 residents to self-quarantine.

“We don’t have enough test kits, [and] every day more and more people will be getting sick,” he said, according to a New York Post report. “We need everyone to understand that they can infect someone or someone can infect you.”

New York City Mayor Bill de Blasio said he’s considering taking similar actions. In New York City, the number of cases of COVID-19 has spiked from 25 on Monday to over 269 on Sunday. On CNN on Sunday morning, the mayor said he expects to see over 1,000 cases in the next couple of days.