Home
Stocks
Here’s what the Javits Center, a glittering mega-event venue in New York City, looks like as a hospital
Prev Article Next Article
This post was originally published on this site 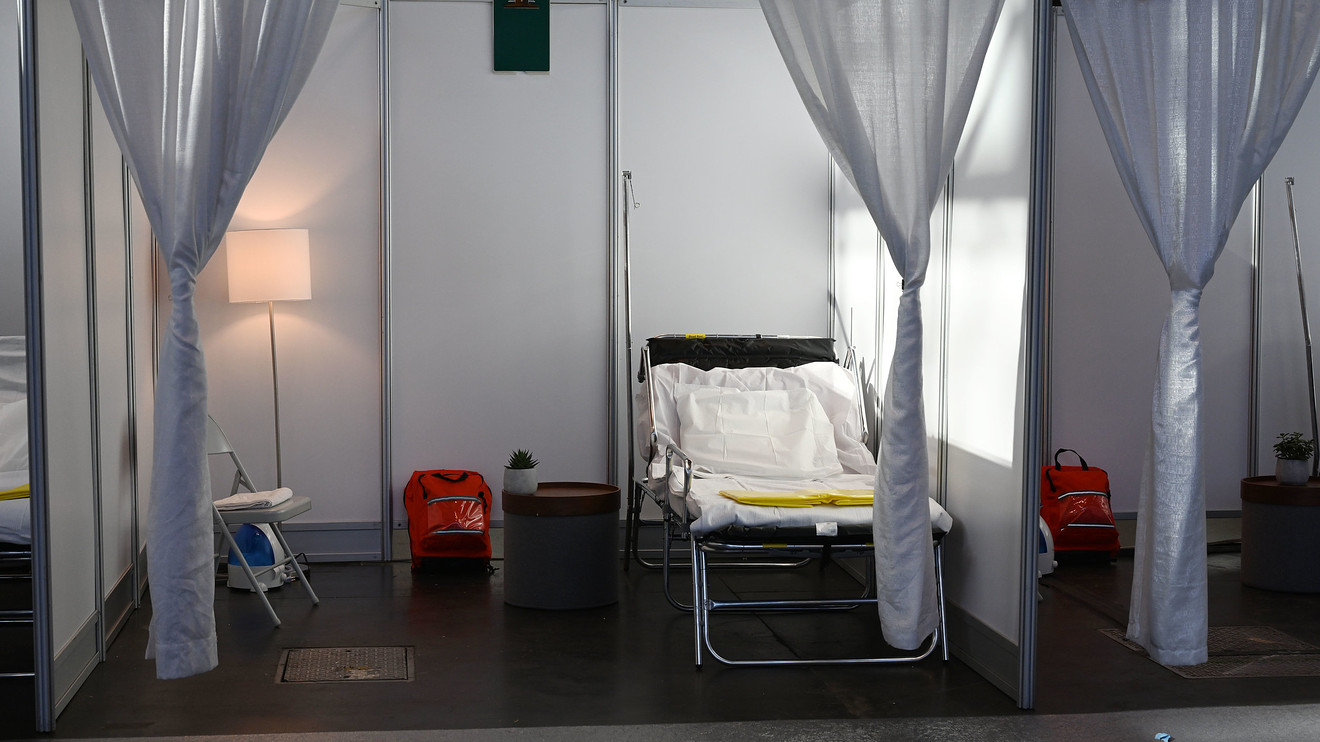 As New York endures the largest outbreak of COVID-19 in the U.S., and while hospitals within New York City face crises of capacity, state agencies and the U.S. Army Corps of Engineers are examining locations where the government can deploy temporary medical facilities. On Friday, Gov. Andrew Cuomo announced that one such setting, the Jacob K. Javits Convention Center in Manhattan’s far West Side, is now complete and will be up and running by Monday.

The all-glass building contains 1,000 beds. That sum will add to the state’s tally of 53,000, but make up only a small portion of the 140,000 total beds Cuomo has projected New York may need during the outbreak’s looming peak three weeks away.

Nonetheless, repurposing the Javits Center for medical care, in concert with similar sites at the Westchester County Center and the campuses of SUNY Stonybrook and SUNY Westbury, has itself been a considerable logistical undertaking.

The seemingly miles of beds being set up at Javits. It is absolutely unreal to see what the National Guard & first responders have put together here in just days. pic.twitter.com/dD0AQg4PO4

The Federal Emergency Management Agency (FEMA) and the Health and Human Services Department provided four 250-bed medical station kits to the center, each equipped with beds and medical supplies.

Contrary to prior reporting, the site will not be used for patients infected with COVID-19, according to a FEMA spokesperson and a spokesperson for the U.S. Army Corps of Engineers, which is highly involved in the design, construction and engineering of the spaces. Instead, it will house patients with health-care needs unrelated to the disease, according to the spokesperson for FEMA, which will oversee the facilities along with the state. Employees of the Javits Center, the U.S. Army Corps of Engineers, the New York National Guard and other federal and state agencies have been preparing the space. The Javits Center and the governor’s office did not respond to requests for comment.

As of Friday morning, New York City reported 25,573 cases and 366 deaths from coronavirus, 97% of whom had underlying health conditions, according to the city’s department of health. And Cuomo said Friday he would ask the White House for permission to turn four more sites in the downstate area into similar overflow facilities that would provide an additional 4,000 hospital beds: the Aqueduct Racetrack in Queens, the Brooklyn Cruise Terminal, CUNY Staten Island, and the New York Expo Center in the Bronx.

“I want to have one in every borough,” Cuomo said Friday, adding that he also wanted additional facilities in Westchester, Nassau and Suffolk counties.

He said he wanted to send a message to downstate, which is facing the highest rate of cases, that “everyone equally is being helped and is being protected.”

Experts in health care facility architecture, design and mechanics said that the key will be to replicate certain “flows” that are typical within hospitals. The primary concerns are the management of patients, caregivers, air and medical waste.

The center will need a way for patients to enter, via ambulance or car or other transportation, while keeping them hidden from the view of the public and the media, explains Cynthia McCullough, evidence based design director of HDR Inc., a global design firm with headquarters in Omaha, Nebraska, that provides architecture, engineering, and construction services and whose portfolio contains work on numerous hospitals and health care facilities internationally, including an expansion of the Walter Reed National Military Medical Center.

Indoors, the patients will need to have some semblance of privacy as well. A photo of the progress made in the Javits Center provided by the New York District of the Army Corps of Engineers on Thursday showed that workers have been constructing rows of clusters of often 16 makeshift rooms — lines of eight rooms, back-to-back. Each individual’s area is enclosed with white walls and a curtain, and model rooms on display during Cuomo’s Friday briefing at the facility showed each space containing a foldout chair, a lamp, a side table with a potted plant, a trash can, and other medical equipment. Power outlets are being distributed so patients can charge their phones.

There are fundamental trade-offs to these settings designed for caring for large numbers of patients.

“We’re looking at the simple geometric concerns and challenges of: OK, how many beds can we fit into an open, expansive space in some level of consistent modularity so that the fewest amount of health-care providers can care for the maximum number of patients?” said Chris Bormann, HDR’s East Region health director.

The Javits Center comes equipped with several amenities that make it a useful location for housing hospital patients. Not only was it sizable and empty, caregivers will also have private areas in secure rooms that already exist within the center.

Air flow and filtration — a critical concern for hospitals — will also be handled by pre-existing systems. And given the Javits Center’s typical use as a setting for conventions with large displays and the ability to accommodate large sums of people at once, its loading docks and waste-handling abilities are assets, Bormann said. However, the medical waste will need to be separated from regular trash and collected by specialized contractors.

By not housing COVID-19 patients, the center avoids other considerations that would need to be made. For patients with infectious diseases, health-care facilities typically create “negative pressure” environments that keep airborne germs from spreading to other regions of the building.

“You’re basically trying to remove any particles through the filtration, to avoid infecting someone who thinks they’re in a clean space,” said Jon Crane, director of translational health for HDR. While the Centers for Disease Control and Prevention says that COVID-19 is primarily transmitted via close contact with an infected person, airborne transmission is still a consideration..

The efforts at the Javits Center and the other facilities being constructed will be in addition to increasing the capacity of the existing hospitals by 50% and in some cases 100%, as well as utilizing beds in hotels and college dormitories for medical personnel and patients that do not require critical care. Cuomo has also tweeted thanks to various companies that have provided mattresses and linens, coveralls, hand sanitizer, masks and various other supplies and services. As of Friday, a total of 62,447 medical professionals or retirees had volunteered to help — a 10,000-person increase from the day prior, Cuomo said.