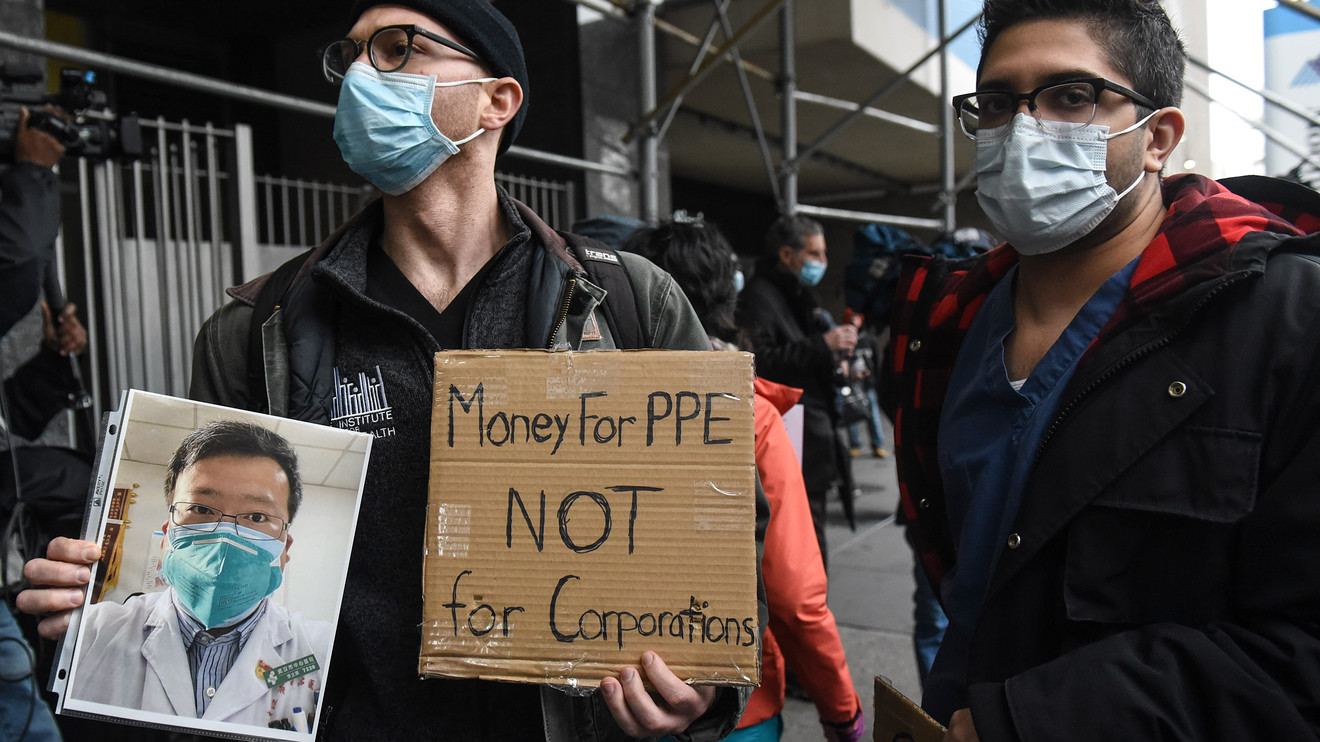 The U.S. labor market showed further signs of damage from the coronavirus that causes COVID-19 on Friday as the global case tally extended beyond a million and the death toll passed 55,000.

Nearly four billion people around the world are now under some order restricting their movements, according to a New York Times tally.

Dr. Anthony Fauci, the infectious disease expert who is a key member of the Task Force created to handle the pandemic, told a CNN panel that he can’t understand why there is still no U.S.-wide stay-at-home order. Only 40 states so far have introduced restrictions with the severity varying state by state.

President Donald Trump has resisted the calls for a nationwide lockdown, putting him at odds with public health experts, as well as billionaire philanthropist Bill Gates.

In Europe, Spain overtook Italy in the number of cases even after it recorded its first decline in daily fatalities, while Germany’s tally moved past official numbers provided by China.

In the U.S., states are still clamoring for basic equipment, including face masks, gowns and gloves.

President Donald Trump invoked the Defense Production Act to shore up supplies of face masks and slammed manufacturer 3M MMM, -2.56%  for failing to keep up with demand after the company’s Chief Executive said the surge was exceeding its production capacity. 3M has doubled mask production since January and said Friday it looked forward to working with the Federal Emergency Management Agency (FEMA) on stepping up production.

The company pushed back against the administration’s request that it stop exporting respirators that are made in the U.S. to Latin America and Canada, given they are in such short supply. The company said it is a vital supplier of that equipment in those markets and that there are “significant humanitarian implications” to such a move.

“Ceasing all export of respirators produced in the United States would likely cause other countries to retaliate and do the same, as some have already done,” the company said in a statement. “If that were to occur, the net number of respirators being made available to the United States would actually decrease. That is the opposite of what we and the Administration, on behalf of the American people, both seek.”

The U.S. case tally climbed to 245,658 on Friday with at least 6,068 deaths, according to data aggregated by the Center for Systems Science and Engineering at Johns Hopkins University. Another 9,311 people have recovered. The U.S. continues to lead the world in the number of cases, with New York the epicenter of the outbreak.

The number of cases in New York state rose to 102,863 on Friday, according to Gov. Andrew Cuomo. There were 10,842 new cases overnight, roughly half of which were based in New York City. The city’s case toll now stands at 57,159, according to Cuomo.

The U.S. March jobs report found 701,000 jobs were lost in the month in data that was based on a survey conducted before the pandemic really kicked in. The real losses were much higher, at least 10 million jobs, based on a separate survey of households.

That survey found a 3 million decline in the number of people who said they were working, while 1.6 million people dropped out of the workforce. The report comes a day after jobless benefits data showed 10 million applied for help in the last two weeks of March, as companies furloughed workers and activity ground to a halt.

Companies continued to disclose the measures they are taking to combat the impact of the virus on their businesses. Many announced further pay cuts for executives and rank-and-file workers, continued to tap credit lines and offer information on their liquidity positions, as the Securities and Exchange Commission has urged them to do.

Here’s what companies said about the impact of COVID-19 on Friday:

• American Airlines Group Inc. AAL, -5.96%  will suspend 60% of its international capacity for the “peak” summer travel season compared with a year ago, in response to “record low customer demand.” The suspensions include an 80% reduction in Pacific capacity, a 65% cut in Atlantic capacity and a 48% reduction in Latin America capacity. The air carrier is also suspending 25 summer seasonal flights until 2021 and delaying the launch of new routes.

• AutoNation Inc.’s AN, -6.15% sales of new and used vehicles fell about 50% in the last two weeks of March. About 95% of the markets the company generates its revenue from are under lockdown orders from federal, state and local governments. The company has placed about 7,000 workers on unpaid leave, has cut pay and frozen all new hiring. It has cut its advertising spend for the second quarter by about 50% and postponed more than $50 million of discretionary spending. The company has cut the pay of its executive chairman, CEO and president by 50%, and the board of directors is waiving retainer fees temporarily. The company had about $1.1 billion of liquidity as of March 31, and about $700 million of availability under a revolving credit facility.

• Chico’s FAS Inc. CHS, +1.49%  has adopted a short-term shareholder rights plan after stock price disruptions due to the pandemic. The plan aims to guard against any individual or group gaining control of the company in the open market without paying a premium.

• Cummins Inc. CMI, -0.88%  is cutting pay for all its U.S. workers by 10% to 25%, in response to lower demand and customer shutdowns. The engine maker is reducing working hours for U.S. employees. Chief Executive Tom Linebarger’s salary will be reduced by 50% and the compensation of its board of directors will be lowered by 25%.

• FedEx Corp. FDX, -5.89% expects to remain in compliance with its debt covenants, but indicated there was risk that it may need to amend the covenants if additional financing is required and results deteriorate further. The package delivery service has seen increased demand for its FedEx Ground delivery service in the U.S., as shelter-in-place measures boost demand for e-commerce, but the shift in sales mix is expected to hurt margins and operating results. Results have also been impacted by “significantly weaker global economic conditions.” Separately, FedEx implemented temporary surcharges on all international shipments, and temporarily eliminated its money-back guarantee for all delivery services.

• Lowe’s Cos. LOW, -0.34%  is raising wages by $2 an hour for all full-time, part-time and seasonal hourly workers for the month of April, throughout the U.S. and Canada. The home improvement retailer also said it will close all stores by 7 p.m., which is an hour later than rival Home Depot Inc. HD, -2.21% Lowe’s will make masks and gloves available to all employees “who want them,” and has developed an app, which is available on employees’ hand-held devices, to implement a new customer limit protocol. The retailer also installed plexiglass shields at all points of sale and increased third-party cleaning shifts in the stores.

• Tupperware Brands Corp. TUP, -6.94%  has drawn down $225 million from its credit agreement. The company is using $50 million for working capital in the second quarter, and the remaining $175 million is a proactive measure against the pandemic.

• Under Armour Inc. UA, -0.58%  will incur pre-tax restructuring and related charges in the range of $475 million to $525 million in 2020 related to a plan that the athletic company announced on Feb. 11, before measures to manage the pandemic began. The charges include about $290 million to forego opening the New York City flagship store, $25 million in employee severance and benefit costs and $95 million in contract termination and other restructuring costs. The company expects to realize $40 million to $60 million in pre-tax benefits for the year and has withdrawn its first-quarter and full-year guidance. The company’s stores will remain closed indefinitely and staff at the full price and outlet stores as well as about 600 U.S. distribution facility workers will be temporarily laid off starting April 12.

• Walt Disney Co. DIS, -3.07% will begin furloughs on April 19. Disney has kept all of its workers on payroll despite closing theme parks and closing down movie shoots, but said that would end later this month.

• W.R. Grace & Co. GRA, +0.65%  expects first-quarter adjusted earnings per share to be at the high end of the guidance range of 65 cents to 72 cents provided in early February. The specialty chemicals company said its outlook included a negative EPS impact of about 6 cents to 10 cents from the effects of the pandemic. The company is expected to report first-quarter earnings on April 30. W.R. Grace said it expects its full-year results to be negatively impacted by the pandemic, but said its manufacturing operations and supply chain have so far not been materially impacted. “Our businesses are designated as critical infrastructure by the U.S. Department of Homeland Security,” said Chief Executive Hudson La Force.