Home
Stocks
Coronavirus update: 1.29 million cases worldwide, 70,798 deaths, and signs that rate of infection is slowing in Europe
Prev Article Next Article
This post was originally published on this site 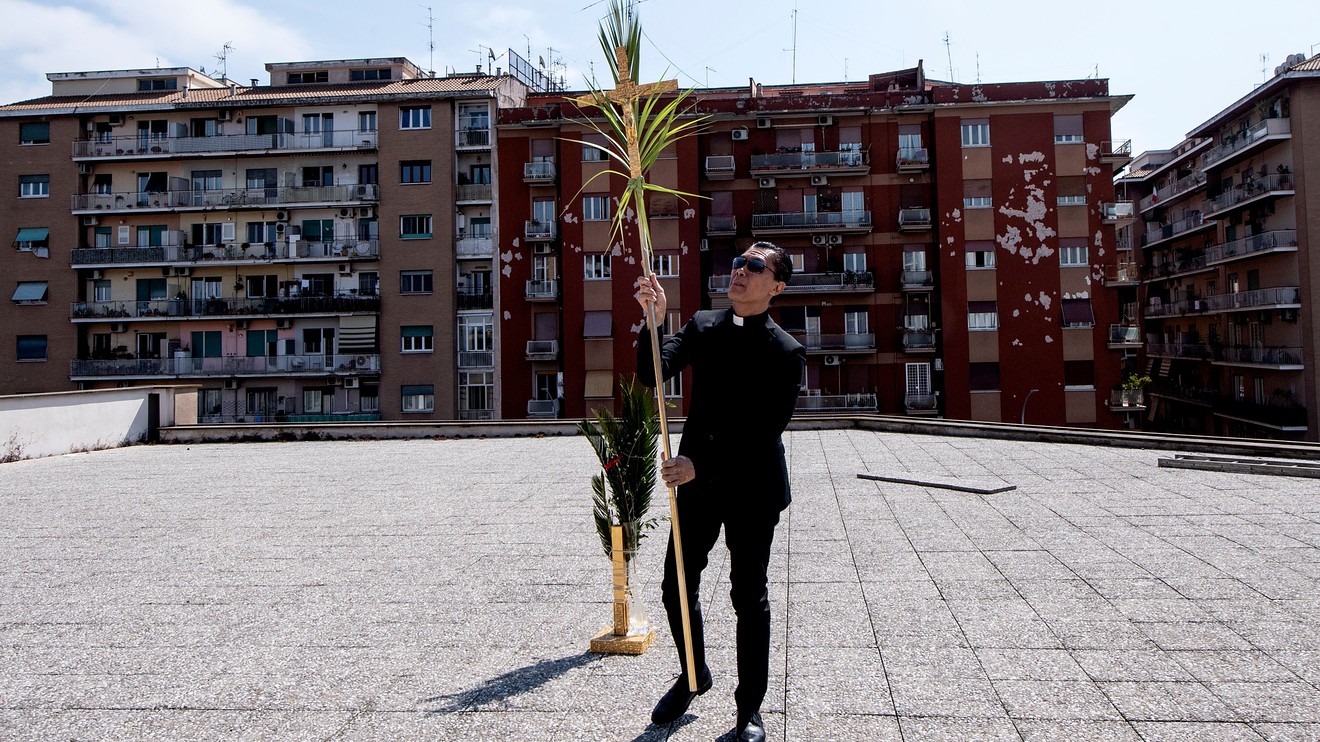 Signs that the spread of the coronavirus that causes COVID-19 is slowing in parts of Europe cheered financial markets on Monday, although it weighed against news that Japan is about to declare a state of emergency for Tokyo and other areas.

Japanese Prime Minister Shinzo Abe said the move could come as soon as Tuesday, but will not include the kind of lockdowns that health experts say are the most effective in containing the illness. Abe also told reporters that his government will launch a 108 trillion yen ($1 trillion) stimulus package to help counter the economic impact of the pandemic, the Associated Press reported.

Japan has 3,654 cases of the virus and 85 fatalities, according to data aggregated by the Center for Systems Science and Engineering (CSSE) at Johns Hopkins University. That places it far lower down the list than countries in mainland Europe and the U.S., which continues to lead in number of cases.

There was good news from Spain and Italy, the two European hot spots for the disease, with the growth rate and number of fatalities slowing over the weekend. The Spanish government said the number of deaths from the virus has fallen for four straight days, and totaled 637 in the past 24 hours, the lowest in almost two weeks. Italy reported 525 new deaths on Sunday, its lowest daily rate in two weeks. Germany and France also reported a slowing of their death tolls.

There are now 1.29 million cases of COVID-19 globally and at least 70,798 people have died, according to the Johns Hopkins data. Another 272,013 people have recovered.

The U.S. case tally stands at 338,995 with 9,684 fatalities. Another 17,727 people have recovered. New York remains the epicenter with a total of 130,689 cases and at least 4,758 deaths. Gov. Andrew Cuomo said the death tally has been flat for two days, a hopeful sign that the curve is flattening, as health experts agree needs to happen to contain the disease and ease the burden on health-care workers and hospitals.

President Donald Trump again promoted the use of the anti-malarial drug hydroxychloroquine as a possible treatment for the virus, even though experts have cautioned that it has not been tested or won approval from the U.S. Food and Drug Administration. Trump said the U.S. government has stockpiled 29 million hydroxychloroquine pills. He blocked infectious diseases expert Dr. Anthony Fauci from answering a question about the drug at a Sunday briefing. Fauci, director of the National Institute of Allergy and Infectious Diseases, has repeatedly said it’s too soon to say if the drug would be effective.

As MarketWatch’s Jaimy Lee has reported, the drug is in the early stages of testing in China, France and the U.S. as a treatment for COVID-19. Pharmacists are concerned that prescribing the drug for the virus has created shortages of the medication for patients with lupus and rheumatoid arthritis, two indications for which it has been approved.

There are also safety concerns. The Banner Health hospital system, based in Phoenix, said on March 23 that a man in his 60s had died and his wife, also in her 60s, was in critical care after the couple consumed a form of chloroquine phosphate used to clean fish tanks. The drug also has a number of adverse effects, like nausea and changes in mood, and can cause drops in blood sugar. Incorrect doses can cause coma, seizures and death.

See:94% of Americans say they are staying away from large groups, up from 68% in mid-March

J.P. Morgan Chase & Co. JPM, +5.83% Chief Executive Jamie Dimon weighed in on the crisis Monday, saying the U.S. wasn’t adequately prepared for a pandemic and urging Americans to roll up their sleeves and work on solving the problems facing the health care system, education, immigration policy and a host of other shortcomings.

“There should have been a pandemic playbook,” he wrote in his annual letter to shareholders Likewise, he added, every problem “should have detailed and nonpartisan solutions.”

Companies continued to announce store and office closures, pay cuts, the furloughing of workers and tapping of credit lines. In medical news, Inovio Pharmaceuticals Inc. INO, +10.33% said it’s planning the first dosing of patients in a Phase 1 trial of its DNA vaccine candidate to treat COVID-19 on Monday.

The vaccine, named INO-4800, has shown promising response in preclinical animal studies. The trial will involve up to 40 healthy volunteers at two trial locations in Philadelphia and Kansas City. Each participant will receive two doses four weeks apart, with data expected by late summer. The trial is being funded by the Coalition for Epidemic Preparedness Innovations (CEPI), an Oslo-based international organization.

GlaxoSmithKline GSK, +2.34% said it’s making an equity investment in Vir Biotechnology VIR, +29.76% as part of a collaboration to research and develop solutions for coronaviruses. The companies say they will use Vir’s proprietary monoclonal antibody platform technology to accelerate existing and identify new anti-viral antibodies, use Glaxo’s expertise in functional genomics and combine their capabilities in CRISPR screening and artificial intelligence.

Here’s what companies have said about COVID-19 on Monday:

• Allstate Corp. ALL, +6.57% will pay out more than $600 million to auto insurance customers over the next two months as part of a Shelter-in-Place Payback plan, given the unprecedented decline in driving amid the pandemic. Most customers will receive 15% of their monthly premium in April in May, paid as a credit to their bank account, credit card or Allstate account. “This is fair because less driving means fewer accidents,” Allstate Chief Executive Tom Wilson said. The insurer is also allowing customers facing financial challenges the choice to delay two consecutive premium payments without penalty and will offer its identity protection product free for the rest of the year.

• Capri Holdings Ltd. CPRI, +31.00% will furlough all 7,000 of its North American retail store workers, effective April 11. Workers had been receiving pay since stores closed on March 18, with stores originally planned for reopening on April 10. The company, whose portfolio includes Michael Kors, Versace and Jimmy Choo, says stores in North America and Europe will remain closed until June 1, or until it’s safe to resume operations. Capri has cut pay for executives and others, suspended share buybacks, reduced capital expenditures and taken other cost-saving measures. The company has drawn down the entirety of its $300 million revolving credit facility, and has $900 million in total cash and cash equivalents on its balance sheet.

• Henry Schein Inc. HSIC, +2.38% is withdrawing financial guidance provided in February, and temporarily cutting salaries of its senior executives, with Chief Executive Stanley Bergman agreeing to a 100% reduction in his base salary from April 6 through June 30. The chief financial officer and the other three most highly paid executives will have salaries reduced by 50%, while management at the director level through senior vice president will have salaries reduced from 10% to 25%. The company is also suspending its share repurchase program.

• 3M Co. MMM, +3.63% said media reports alleging a shipment of its N95 respirators was seized and diverted by U.S. authorities on Friday were “inaccurate,” and that it has no knowledge of such a seizure. “3M has no record of any order of respirators from China for the Berlin police. We cannot speculate where this report originated.” The Financial Times reported that the U.S. seized masks bound for Berlin, and that a German official had denounced the seizure as modern piracy.

• RH, the home furniture chain formerly known as Restoration Hardware RH, +17.31%, will temporarily furlough 2,300 employees and permanently cut 440 jobs, given uncertainties regarding when stores will reopen. The executive leadership team will forgo 100% of their salaries until business stabilizes, while those with SVP and chief titles will have salaries reduced by 40%, and salaried employees will face cuts of 10%. RH will reduce fiscal 2020 capital expenditures by $130 million and cut expenses by $150 million.

• Slack Technologies Inc. WORK, +3.77% plans to sell $600 million worth of convertible senior notes, due 2025. The notes will be convertible to cash, shares of common stock, or a combination of both, at the option of the holder.

• The Container Store Group Inc. TCS, +11.88% is closing all remaining stores that weren’t already closed by state and local orders. Coppell, Tx-based retailer said it will switch to click & pick curbside pickup and in-store appointments only, with just one customer at a time to be allowed into a store in select locations where it is allowed and employees want to work. The company has furloughed its store workers.

• Wayfair Inc.’s W, +38.71% business has skyrocketed amid the pandemic. Wayfair went into March with gross revenue up just below 20%, consistent with January and February. However, business more than doubled toward the end of March with the run-rate maintained in early April. Office staff are working from home, while fulfillment, transportation and logistics facilities are fully operational Wayfair is offering 535 million of senior convertible notes and is postponing its annual shopping day, Way Day, in favor of a promotional event with a charitable component.

• Workday Inc. WDAY, +9.43% has tapped a term-loan facility of $750 million and a revolver of $750 million. The company had an outstanding term loan of $500 million as of April 2, according to a regulatory filing.

Coronavirus Update: ‘Hard Days’ Ahead and Global Deal-Making in Chaos