Home
Stocks
The Tell: Goldman strategist says market rally has been ‘too rapid’
Prev Article Next Article
This post was originally published on this site 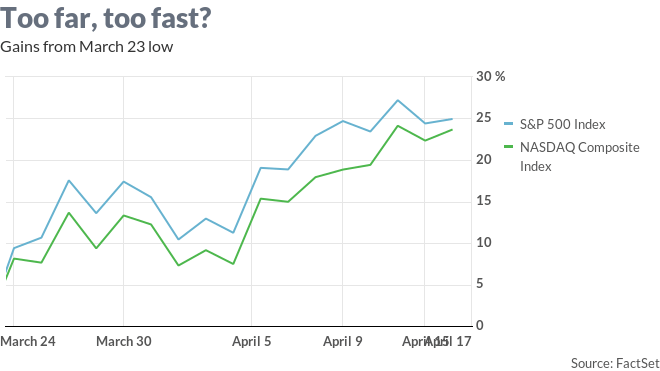 The rally in markets has come too far, too fast, leaving risks tilted to the downside despite the huge fiscal and monetary support provided to cushion the world economy, according to a strategist at Goldman Sachs.

“Our view is that the risk in the short term is still on the downside. And I think the rally that we’ve seen, which in many markets has been 25% or so from the low is probably too rapid given the near term prospects that we see for the economic and profit data,” said Peter Oppenheimer, chief global equity strategist at Goldman Sachs, during a presentation for U.K.-based reporters.

He wasn’t entirely pessimistic. As infection rates slow, it gives investors more confidence that the duration of this downturn is going to be somewhat limited, he said.

The Federal Reserve’s extension of bond buying to include corporate debt, and the European Central Bank’s widening of collateral criteria, also is supportive, as is the ramping up of fiscal policy.

“Whether it’s enough remains to be seen, but the scale and scope of these programs is fairly unprecedented,” he said.

Silvia Ardagna, managing director of the bank’s investment strategy group, said the ECB’s bond buying efforts should be able to cover the estimated spending by eurozone countries. “But if government debt were to increase by more, because more support to the economy was needed, then we think a scale-up of the program could certainly take place,” she said.

Andrew Wilson, chairman, global fixed income at Goldman Sachs Asset Management, said at some point investors will focus on the amount of debt that has been issued and just how much will need to be repaid.

“Some of the themes that we think could really play out here around central banks tolerating higher inflation because of course, one way to get out of the terrible debt burden that countries would have is to allow higher inflation,” he said.

There will be a risk to longer-dated bonds “as we get much further through this process, depending on how inflation sets up.”