Home
Stocks
Will mutual funds get a second wind… as ETFs?
Prev Article Next Article
This post was originally published on this site

Call it “the ETF-ication of everything.”

Exchange-traded funds, which debuted in 1993, have remade the financial services industry in their image. Brokerages are making assets more tradable. Fund managers are targeting narrower slices of the market as investing strategies. Fees are being slashed across the board.

And now ETFs are coming for mutual funds, those clunky, expensive financial products that defined the late 20th century. Industry participants see a coming wave of mutual funds being converted into ETFs as inevitable, as a confluence of legal and regulatory shifts makes it possible and recent market volatility proves ETFs are the more reliable option.

“People have been talking about doing this for ages,” said Dave Nadig, a long-time industry veteran who’s now the chief investment officer and director of research at ETF Database. What’s different now, Nadig said, is the realization by active fund managers of just how much money they stand to hemorrhage.

Last summer, the assets held in passively-managed funds topped those in active funds for the first time. It’s quite rational for investors to flock to passive funds: over the past decade, according to Morningstar, barely one-quarter of all active funds topped the performance of their passive rivals. Morningstar data also show that the more expensive the active fund, the less likely it has been to survive and outperform its passive peers.

And while some mutual funds are passively managed, they’re not as common: data from Morningstar Direct shows they make up 25% of all mutual fund assets. Industry participants also point to a host of other ETF benefits for individual investors. They’re easier to buy and sell, for one thing, and carry less of a tax burden than mutual funds do. 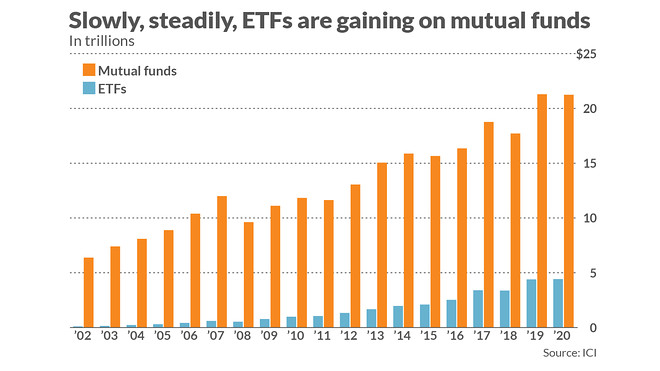 Against that backdrop, a 2019 white paper by a prominent law firm that concluded there was no legal reason that traditional open-end funds like mutual funds could not be converted into ETFs was well-received in the industry.

“ ‘It’s tough to get shareholders of funds to vote on things. They’re often held in retirement accounts where people aren’t actively focused.’ ”

There’s widespread agreement, said Edward Baer, one of the Ropes & Gray attorneys who wrote the paper, “that to the extent that the ETF is a better vehicle, it would be great if managers could do conversions. Someone just has to do the first one. No-one has taken the plunge yet because it will be time-consuming and difficult.”

Most challenging, Baer thinks, will be unpacking what he calls “the business relationships and the economics of the mutual fund structure.”

For example: mutual funds have multiple share classes, but ETFs do not. Many mutual fund investors hold their funds in a retirement account, and do not have an associated brokerage account, which is necessary for ownership of an ETF.

“ ‘Typically, when a financial services company makes a change like this, it’s to benefit themselves first and individual investors are a second or third thought.’ ”

What’s more, Baer thinks that while it may be legally possible to make a conversion from one structure to another without a shareholder vote, “I expect that most of these transactions, if they happen, will involve shareholder consent to the transaction. That’s another wrinkle: it’s tough to get shareholders of funds to vote on things. They’re often held in retirement accounts where people aren’t actively focused.”

The question remains: will conversions be good for individual investors?

Ilyce Glink, CEO of Best Money Moves, a personal finance service focused on workforce financial stress, is skeptical. “Typically, when a financial services company makes a change like this, it’s to benefit themselves first and individual investors are a second or third thought,” she said.

Most individual investors “don’t pay attention to the jargon-filled statements that actually tell them what’s happening with their investments. They should pay attention. Not doing so could cost them in the long run,” Glink told MarketWatch.

But industry participants say they work with ETFs precisely because they are a superior choice for end investors. That includes Bibb Strench, a lawyer with Thompson Hine LLP in Washington, DC, who “saw the birth of the ETF industry in my office at the SEC,” as he puts it.

See:Time, money and effort… and then your great ETF idea gets ripped off

He thinks conversions, when they happen, will be “seamless” and bring end investors all the benefits of ETFs: better trading and price transparency, lower prices, and so on.

Strench likens fund conversions to upgrades in another sector: customers may say “If I’m perfectly happy with my 1998 sedan, why should I have to change it?” There are plenty of reasons to drag that “perfectly happy” user into the 21st century, even if he or she doesn’t currently expect to use all the fancy bells and whistles of a newfangled product.

He thinks another recent ETF industry trend may help accelerate the process: the rise of “active non-transparent” funds that use the ETF framework but allow managers to shield their holdings, like mutual fund managers do. The SEC blessed those products in mid-2019, and the first began trading in early April. They are widely seen as a way for fund managers more accustomed to the mutual fund construct to access the ETF “wrapper.”

See: What is a ‘non-transparent’ ETF, and why would anyone want to own one?

The market turmoil of the past few weeks may also grease the skids. The pricing of many exchange-traded funds became disconnected from the value of the assets they held, but not as badly as it did for mutual funds “We were not that far from having some mutual funds have to close,” Nadig argues.

“What we saw in bond ETFs and mutual funds highlighted extremely clearly just how broken bond mutual funds are, and how much better off investors would be if they got those exposures in ETFs, which represent real pricing,” he said.