Home
Stocks
Key Words: ‘The most effective leader on the planet’ feels the love for her handling of the coronavirus pandemic
Prev Article Next Article
This post was originally published on this site

“ ‘We have done what very few countries have been able to do. We have stopped a wave of devastation.’ ”

That’s New Zealand Prime Minister Jacinda Ardern claiming a win against the coronavirus in an address to the nation on Monday from capital city Wellington.

Kiwis, she said, will remain in lockdown for another week before restrictions will be eased on April 27, assuming progress in the fight against the global pandemic continues.

“Our transmission rate, the number of cases each person with the virus passes it onto, is now 0.48, less than half a person each,” she said. “Overseas the average is 2.5 people. We have amongst the lowest number of confirmed cases per 100,000 people in the world.”

Ardern has received praise far and wide for her handling of the crisis. The Atlantic’s Uri Friedman hailed her as perhaps “the most effective leader on the planet,” in part, for her empathetic style.

“Her messages are clear, consistent, and somehow simultaneously sobering and soothing,” he wrote in a piece over the weekend. “And her approach isn’t just resonating with her people on an emotional level. It is also working remarkably well.”

New Zealand has made some serious progress in reaching its goal of not just flattening the curve, but of eliminating the coronavirus completely. As it stands now, testing is prevalent, the health system isn’t overwhelmed and new cases peaked earlier this month. Out of the country’s population of almost five million, there have been 12 deaths to this point.

Aside from the much more important metrics she’s been praised for, Ardern has also earned points for relatability. For instance, here she is in a Facebook FB, +0.41% video wearing a sweatshirt and talking about coronavirus after she put her toddler to bed:

And here she is on “The Late Show,” where she drew loud applause from the audience in November after host Stephen Colbert claimed he was a “huge admirer” of hers:

She continues to make moves that bolster her standing in the public eye. Last week, Ardern announced she and her cabinet will take a 20% pay cut for the next six months.

“We acknowledge New Zealanders who are reliant on wage subsidies, taking pay cuts, and losing their jobs as a result of the Covid-19 global pandemic,” Ardern said Wednesday.

Her actions are reflected in her recent approval ratings. In a poll earlier this month by market-research firm Colmar Brunton, 88% of New Zealanders said they trust the government to make the right decisions amid the pandemic and 84% approved of the government’s response. Those numbers are significantly higher than those in any of the world’s seven biggest economies. 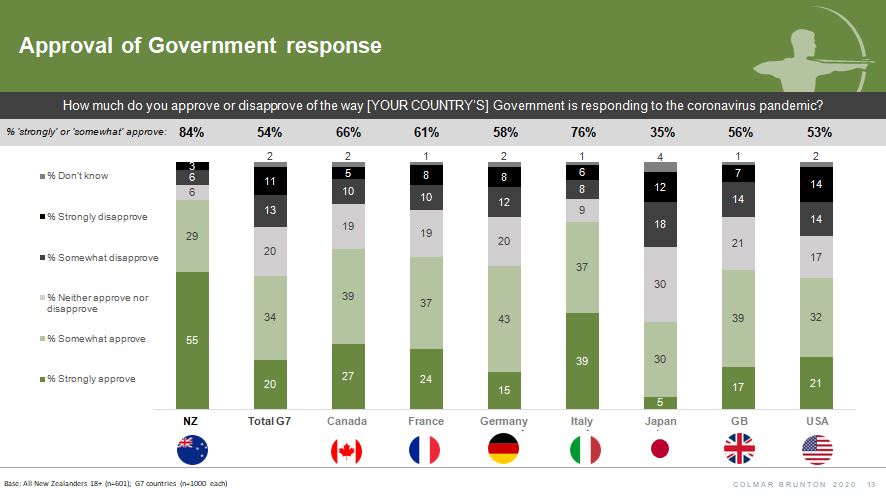 As you can see in the graph above, only 53% of Americans polled approve of the U.S. government’s response. The leadership styles of President Trump and Ardern, of course, are vastly different, as Charles Pierce noted in a recent piece for Esquire.

“All it takes is a leader with credibility who tells the truth. New Zealand has one of those. We do not,” he wrote. “No complaints about the media. No paranoid rambling about career civil servants who tell the country the truth. No blame-shifting, responsibility-ducking, or daily cheapjack self-aggrandizement. But a keen eye kept on the important things.”

And there’s no shortage of praise for Ardern on Twitter TWTR, +2.64% , either: