Home
Stocks
Their Stories: Famed shoe designer Sergio Rossi was a cobbler first and foremost
Prev Article Next Article
This post was originally published on this site

“I was born among leather,” the Italian shoe designer Sergio Rossi once said.

Rossi did indeed grow up with a shoe in each hand, both helping his father, a boot-maker in San Maura Pascoli, to make shoes, and later selling them alongside his brother Franco on the Italian Riviera in the years after World War II.

“I have always thought of myself as a calzuler, a cobbler, then I became a ‘creative manager,’” said Rossi, who founded one of the world’s most famous shoe brands, Sergio Rossi, worn by the likes of Madonna, Naomi Campbell, Rihanna, Taylor Swift and Gwyneth Paltrow. “Watching my father at work I stole his trade.”

On April 3, Rossi died from complications from COVID-19 at the age of 84. He died in the city of Cesena, in his home region of Emilia-Romagna, not far from the town where he grew up. He is survived by his son Gianvito Rossi, also an acclaimed shoe designer with his own namesake brand.

It was in 1960, however, that he had his first big break: the actress Anita Ekberg wore one of his shoe designs in the Italian hit movie “La Dolce Vita,” which won both the Palme d’Or at the Cannes Film Festival and an Oscar for Best Costume Design.

In 1968, Rossi launched his namesake brand. His shoes soon became celebrated for their geometric patterns, their bright colors, and the slavish care with which they were produced: famously, each shoe took 14 hours—and an epic 120 stages—to make.

In the 1970s, Rossi began to collaborate with young Italian designer Gianni Versace; by the 1980s he was working with Dolce & Gabbana; and by the 1990s Gucci.

Aligning himself with prominent designers displayed a shrewd business brain. By siding with those making names in the fashion industry, Sergio Rossi became synonymous with style and luxury, while getting a free advertising boost.

Many of his designs became cult classics.

That included the Opanca, a red kitten-heel sandal that left the foot stripped nude aside from delicate, barely-there straps; the classic Godiva stiletto pump; and the chunky-heeled, more practical Virginia. 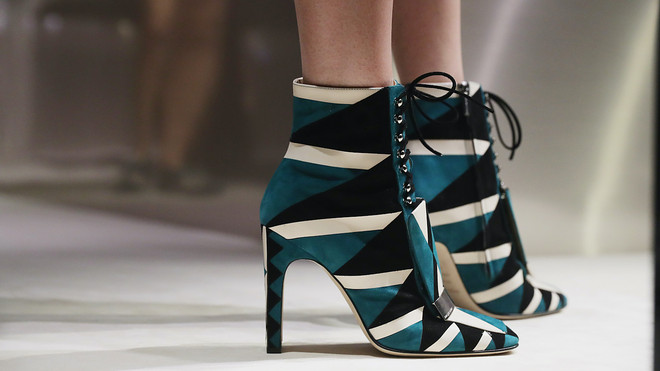 A Sergio Rossi design at Milan Fashion Week in 2017.

“Rossi wanted to create the perfect extension of a woman’s leg, and to this end, he was very successful,” said Rebecca Shawcross, senior shoe curator at the Northampton Museum and Art Gallery in England. “Some of the styles are very minimalist, adorning the foot but also accentuating its nakedness at the same time.”

Shawcross insisted that Rossi was “a shoemaker first and foremost.”

“He was able to invest this practical hands-on knowledge—how a shoe is made, the use of materials, the importance of fit and wearability—with his creative design flair,” she said. “He managed to create a brand that still felt it involved craftsmanship…. You get a sense that Rossi was still involved in the making process far more deeply than with other brands. He was hands-on.”

“Rossi married old-school craftsmanship with postwar Italian style,” said U.S.-based fashion historian Kimberly Chrisman-Campbell, author of ‘Worn on this Day: The Clothes that Made History.’ “His shoes were sexy but also wearable.”

When Rossi opened his first New York boutique in the late 1990s, around the same time as Jimmy Choo, he became “part of the luxury shoe renaissance immortalized in the TV show ‘Sex and the City,’” Chrisman-Campbell added.

Rossi sold the majority of his stake in the company in 1999 to the Gucci Group (now known as Kering) for US$96.2 million. In 2015, Kering PPRUY, -3.21% sold it on to the European investment group Investindustrial.

The ethos of his personality, however—with his focus on beauty and workmanship—lived on in the brand.

Read more stories about lives lost during the COVID-19 pandemic

“The label is still thriving, most recently positioning itself as an innovator in sustainability,” Chrisman-Campbell said. “Many of the most exciting shoe designers working today got their training there.”

“Sergio Rossi was a master,” the brand’s chief executive, Riccardo Sciutto, said in a post on Instagram. “and it is my great honor to have met him.”