Home
Market
Trump says could say in a week or two whether China adhering to trade deal
Prev Article Next Article
This post was originally published on this sitehttps://i-invdn-com.akamaized.net/trkd-images/LYNXMPEG451WI_L.jpg 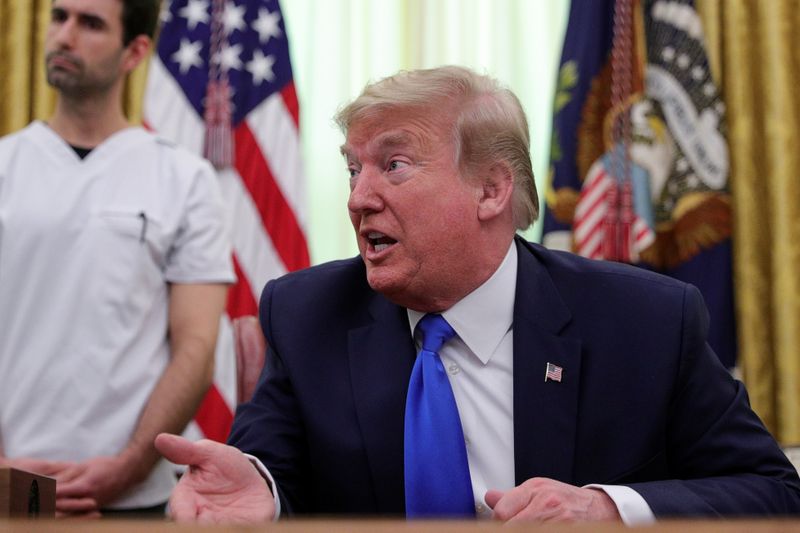 WASHINGTON (Reuters) – U.S. President Donald Trump said on Wednesday he would be able to report in about a week or two whether China is fulfilling its obligations under a Phase 1 trade deal the two countries signed in January before the coronavirus spread globally.

Trump, whose administration is weighing punitive actions against Beijing over its early handling of the virus outbreak as economic damage mounts, said he was “watching closely” whether China would meet its commitments to increase U.S. goods purchases under the trade deal.

He said China was buying a lot of American farm product, but questioned whether the purchases were at the levels needed to meet the deal’s commitments on U.S. agricultural and manufactured goods, energy and services.

“I’ll be able to report in about a week or two as to – not only with the farmers, but with many other industries also,” Trump said.

“They understand they have a deal and hopefully they’re going to get with the deal and we’ll see. They may. They may not. We’re going to find out,” Trump added.

Under the trade deal, China agreed to increase its purchases of U.S. goods from a 2017 baseline by $200 billion over two years, with about $77 billion in increased purchases in the first year and $123 billion in the second year.

Washington has pledged to launch negotiations with Beijing on a Phase 2 trade deal tackling government subsidies and thornier technology transfer issues, but there has been no effort to start these talks since the coronavirus has locked down large parts of the U.S. economy.

U.S. officials have said they are weighing actions against China, including possible tariffs and moves to shift supply chains away from China.

Asked about these at a White House briefing, Trump said, “We’re in the midst of some very big things, so I just don’t want to talk about that now.”

But comments by White House press secretary Kayleigh McEnany on Wednesday highlighted a deepening rift between Washington and Beijing.

“Right now it’s a relationship of disappointment and frustration because the president has said how frustrated he is that some of the decisions of China put American lives at risk,” McEnany said.