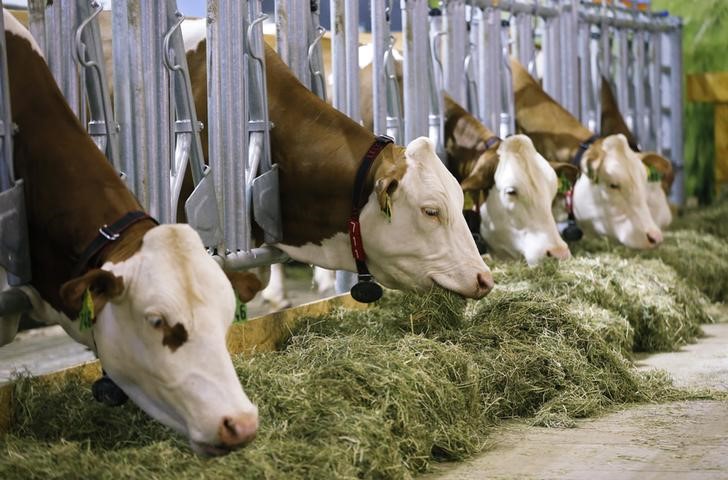 WINNIPEG, Manitoba/LONDON (Reuters) – There is no room on the range for cattle, as shuttered slaughterhouses across North America due to the pandemic leave farmers nowhere to ship their animals.

Now fast-food chain Wendy’s (NASDAQ:WEN) says it is running out of beef, while Kroger (NYSE:KR) and Costco (NASDAQ:COST) limit sales of some meat items, underlining the growing dislocation in the meat supply chain.

Canada and the United States are among the world’s biggest beef exporters, but outbreaks have forced plants owned by Cargill Inc, JBS SA (OTC:JBSAY) and Tyson Foods (NYSE:TSN) to temporarily close or slow production, as they balance worker safety with food security.

“It’s a horrible situation for us to watch,” said Leighton Kolk, who normally ships 500 head of cattle to slaughter per week from his feedlot at Iron Springs, Alberta.

Last week, he moved 40 and is not sure there will be a single bid this week, at a time when he normally sees the highest prices of the year ahead of barbecue season. Each head of cattle that stays on his farm costs C$4 per day to feed.

“The consumer is going to pay a huge price and we could approach financial insolvency because these animals are dropping in value,” Kolk said.

Ryan Kasko, chairman of the Alberta Cattle Feeders’ Association, estimates there are up to 80,000 Canadian cattle awaiting slaughter, and the number may reach 250,000 head by July.

“A month ago, I couldn’t even imagine this,” Kasko, a feedlot operator, said.

But beef buyers are seeing anything but glut conditions.

“From time to time, there could be some items that we’re out of stock on,” Wendys Chief Executive Todd Penegor told analysts on Wednesday. “It’s probably a couple of weeks of challenging tightness that we’ll have to work through.”

Victor Colello, director of meat and fish at New York City grocery chain Morton Williams (NYSE:WMB), said he has not had any trouble getting meat but that “prices are crazy.”

“In the past two weeks, prices have gone up anywhere from $3 to $5 per pound. I find myself changing prices every two or three days.”

“I’m 56 years old, I’ve been doing this all my life and I’ve never experienced something like this,” Colello said.

The average unit price of fresh beef at U.S. tracked retailers was 6% higher in the week ended April 25 than a year earlier, according to market research firm Nielsen.

Those prices are not reaching cattle farmers, however. Some packers offer no bids for cattle, while others offered prices that were 30% lower from January, Kasko said.

“We believe the assertions lack merit, and we are confident in our efforts to maintain market integrity and conduct ethical business,” Cargill spokesman Daniel Sullivan said.

Kolk and Kasko normally ship to two Alberta plants that together supply two-thirds of Canada’s beef, but are now coronavirus hotspots.

Cargill resumed production this week at High River, Alberta after a two-week shutdown, and JBS is producing more slowly at its Brooks, Alberta plant.

Canada and the United States have both announced aid packages for the food and agriculture sectors.

Price estimates for the calves she will sell in autumn are less than half of the usual price, as the feedlots who buy them cope with big cattle backlogs.

“Each day we are on pins and needles to make sure those plants stay open.”