Home
Stocks
The same number of people could die from ‘deaths of despair’ as have already died in the U.S. from coronavirus, new study finds
Prev Article Next Article
This post was originally published on this site

In addition to more than 75,000 deaths in the U.S. from COVID-19, the growing epidemic of “deaths of despair” in the U.S. is also increasing due to the pandemic — and another 75,000 more people will likely die from drug or alcohol misuse and suicide, according to new research released by Well Being Trust and the Robert Graham Center for Policy Studies in Family Medicine and Primary Care.

Additional “deaths of despair” range from 27,644, assuming a quick recovery and the smallest impact from unemployment, to 154,037, assuming a slow recover and the greatest impact from unemployment. “We can prevent these deaths by taking meaningful and comprehensive action as a nation,” the researchers wrote in the “deaths of despair” report published Friday.

“More Americans could lose their lives to deaths of despair, deaths due to drug, alcohol, and suicide, if we do not do something immediately,” the report said. “Deaths of despair have been on the rise for the last decade, and in the context of COVID-19, deaths of despair should be seen as the epidemic within the pandemic.” 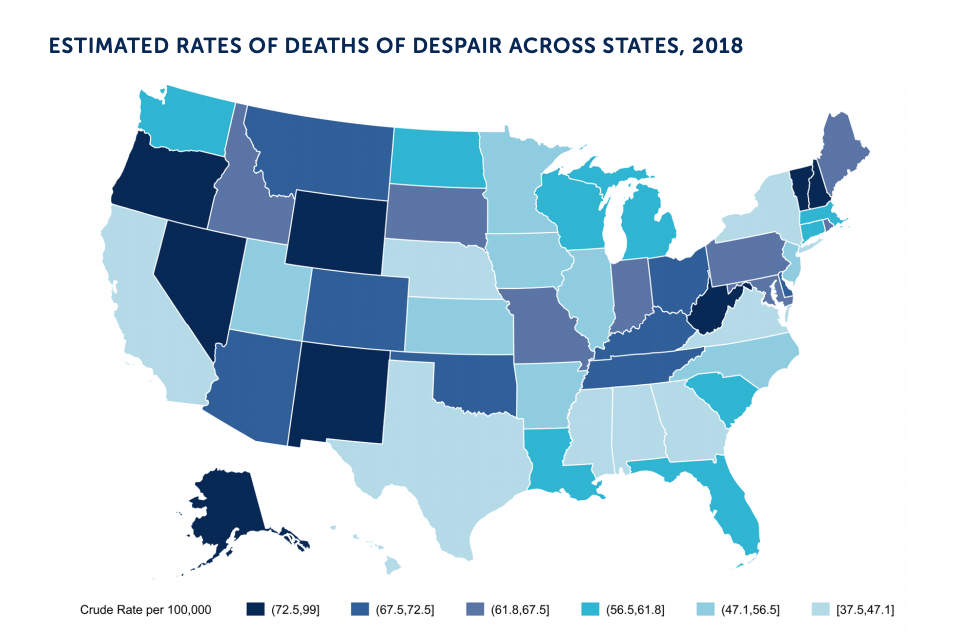 Source: Well Being Trust and the Robert Graham Center for Policy Studies in Family Medicine and Primary Care.

President Donald Trump has repeatedly warned that efforts to stem the rapid spread of COVID-19, the disease caused by severe acute respiratory syndrome coronavirus 2, or SARS-CoV-2, are spiraling the economy into another Great Recession; the impact has sent the Dow Jones Industrial Index DJIA, +1.38% ricocheting wildly in recent months.

“People are dying the other way too when you look at what happens with drugs, it goes up, when you look at suicides,” Trump told ABC News DIS, +2.19% this week about his decision to reopen the economy. (“It is not a foregone conclusion that we will see increased suicide rates,” Christine Moutier of the American Foundation for Suicide Prevention recently told the Associated Press.)

The federal government must fully support and invest in a plan to improve mental-health care, said Benjamin Miller, chief strategy officer at the Well Being Trust. “If we work to put in place healthy community conditions, good health-care coverage, and inclusive policies, we can improve mental health and well-being,” he added.

The Well Being Trust is a national foundation dedicated to advancing the mental, social, and spiritual health of the nation. The Robert Graham Center for Policy Studies in Family Medicine and Primary Care is an independent research unit affiliated with the American Academy of Family Physicians, and works to improve individual and population health by enhancing the delivery of primary care. 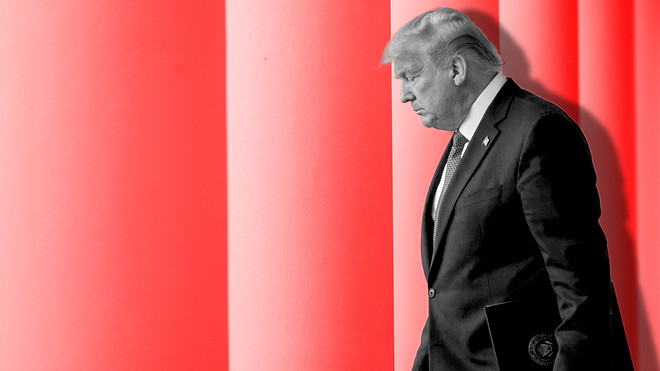 Trump has vacillated between heeding the advice of public health experts and bending to the views of his favored economists.

Anne Case and Angus Deaton, economists at Princeton University, first chronicled these “deaths of despair” among middle-aged non-Hispanic Caucasians since 1999. They include deaths by suicide, alcohol poisoning, overdoses of opioids and other drugs, and cirrhosis of the liver. The CDC estimates they’ve almost doubled since 1999, reaching 150,000 in 2017.

”SARS CoV-2 is having an unprecedented impact on the world. No one alive can recall any infection or worldwide event of such magnitude and scale,” it added. “Along with the tens of thousands of deaths in the United States from the virus, COVID-19 overlays the growing epidemic of deaths of despair threatening to make an already significant problem even worse.”

The researchers issued a warning for the months and even years ahead, arguing for additional investment in health care, and strategies to deal with the phenomenon. “A preventable surge of avoidable deaths from drugs, alcohol, and suicide is ahead of us if the country does not begin to invest in solutions that can help heal the nation’s isolation, pain, and suffering,” they wrote.

The debate over the ramifications of a months-long shutdown of the American economy has been at times both emotive and sobering. Anthony Fauci, the director of the National Institute of Allergy and Infectious Diseases for more than three decades and one of the leading experts in the U.S. on infectious diseases, has pleaded with people to “socially distance.”

Source: Well Being Trust and the Robert Graham Center for Policy Studies in Family Medicine and Primary Care.

Read also:Trump floats idea of disinfectant for coronavirus ‘by injection inside or almost a cleaning’ — later says he was speaking ‘sarcastically’

Youyang Gu, an independent researcher who graduated from the Massachusetts Institute of Technology in 2015, said it’s important to consider a model’s historical accuracy when citing its projections: “A model isn’t very useful if it’s not accurate.” His model is one of several cited by the Centers for Disease Control and Prevention.

He projects 161,727 deaths from the respiratory disease by Aug. 4, with a margin-of-error range of 99,000 to 266,000, taking into account transmission rates, the length of time it takes to recover and how long a person remains contagious. Read more about his model works here. “We present the most likely dates that the U.S. will surpass certain deaths milestones,” Gu said.

Approximately 134,000 people in the U.S. could die from COVID-19, more than double an estimate five weeks ago of 72,000, according to the Institute for Health Metrics and Evaluation at the University of Washington’s School of Medicine. That projection, closely watched by the White House, could go as high as 243,000, taking into account the institute’s margin of error.