Home
Market
StockBeat: Euronext Shows How Good the Virus Has Been to Exchanges
Prev Article Next Article
This post was originally published on this sitehttps://i-invdn-com.akamaized.net/news/LYNXMPEE5B1UA_M.jpg 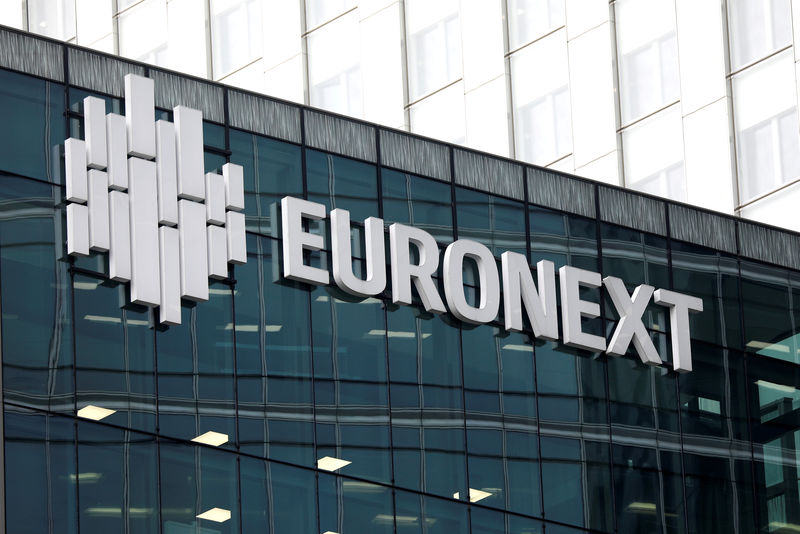 Investing.com — European stocks, as the saying goes, are invited to only some of the parties but all of the funerals. But the people who run those markets have the enviable position of catering to both, as Euronext ‘s first-quarter results showed after the close on Wednesday.

The stock exchange operator posted a 30% increase in like-for-like revenue growth in the first three months of the year thanks to a surge in market volatility in March. Euronext (PA:ENX) stock rose as much as 5% to a new all-time high before being dragged down by the rest of the market to be up only 2.0% by 5:15 AM ET (0915 GMT). It’s now up 16.6% in 2020, outperforming both London Stock Exchange Group  (LON:LSE) shares and Deutsche Boerse (DE:DB1Gn) shares, which have risen 1.7% and 4.3%, respectively.

Financial marketplaces of all stripes have all benefied from the same market volatility since the pandemic erupted – spread better IG Group(LON:IGG)’s shares have risen 11% year-to-date, while smaller rivals CMC Markets (LON:CMCX) and Plus500 (LON:PLUSP) have risen by 38% and 45%, respectively. With the S&P VIX index, which measures stock market volatility, still at 35,72, far above historical averages, there seems to be little risk to that outperformance in the near term.

However, it can’t be expected that volatility will continue to stay so high forever. Quite the reverse: increasing talk of yield curve control by central banks points to a future dominated by financial repression, which will hit trading in interest rate products particularly hard. Equity markets, meanwhile, seem destined to be invaded by an army of zombie companies as a round of state and regulatory intervention threatens to do for travel and leisure companies what it has ‘achieved’ for European bank stocks in recent years.

Euronext has done well to insulate itself against that risk by expanding into new areas such as power trading (with the acquisition of two-thirds of Nord Pool (NASDAQ:POOL) and custodial services. CEO Stephane Boujnah told analysts on a call after the results that he sees “no pause” to its M&A activity, and his refusal to get drawn into a bidding war for Spain’s Bolsas y Mercados Espanoles (MC:BME) gives confidence that its available resources will be used well.

Elsewhere Thursday, stock markets across the continent trended lower, following U.S. markets that have slid this week as a string of high-profile investors and, most importantly, Federal Reserve Chairman Jerome Powell have warned that the economic outlook is not as rosy as the liquidity-driven rally in April would suggest.

By 5:15 AM ET (0915 GMT), the Stoxx 600 benchmark was down 1.6% at 328.70, testing a four-week low. The German DAX index was down 1.5% and the U.K. FTSE 100 underperformed with a drop of 2.2%, weighed on by renewed fears about the country’s handling of the pandemic, the cost of its wage subsidy scheme, and the apparent lack of interest in protecting the economy against a fresh economic shock at the end of the year, when the Brexit transition period ends.