Home
Stocks
Mark Hulbert: Gold prices could move higher if these 2 things happen with the economy and market timers
Prev Article Next Article
This post was originally published on this site

Why hasn’t the Federal government’s extraordinary fiscal and monetary stimulus led to higher inflation and bigger increases in gold? Imagine if we were told last February that $5 trillion would be injected into the U.S. economy by May — a $3 trillion increase in the Federal Reserve’s balance sheet and $2 trillion in Congress’ fiscal stimulus (the CARES act). I would have expected both gold prices and inflation expectations to explode.

Yet they instead have reacted with little more than a shrug. According to the Cleveland Federal Reserve, expected inflation annualized over the next 10 years has fallen to 1.16% from 1.62% in February.

The first factor that helps to explain these otherwise inscrutable reactions is the declining velocity of money — how often money changes hands. That’s because increasing the supply of money, as the federal government has done, will be less stimulating to the extent people are less inclined to use it.

There’s no doubt that the velocity of money has fallen. In fact, as you can see from the chart below, it has plunged. Part of the reason that the velocity has fallen is that many of us have been sheltering in place and therefore have had fewer opportunities to spend than previously. But we’re also reticent to spend because we’re worried about the future — whether we’ll have a job, whether a crashing stock market will sabotage our retirements, and so on. 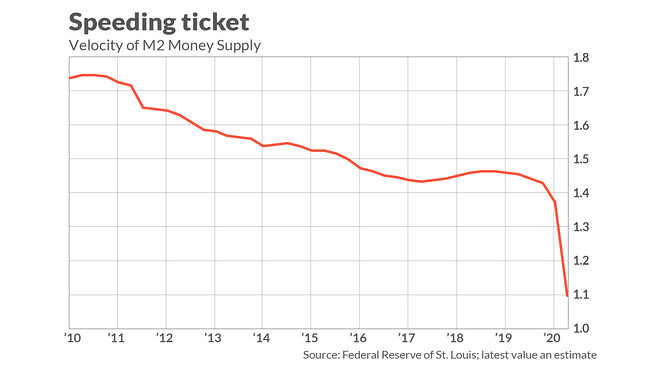 So while there is more money sloshing around the economy, we’re less likely to spend it. It therefore shouldn’t be particularly surprising that the additional stimulus hasn’t translated into higher inflation expectations and gold prices.

The other reason the price of gold hasn’t exploded upwards in the wake of the extraordinary government stimulus is excessive bullishness on the part of gold market timers. As contrarian analysis teaches us, markets typically perform better in the wake of skepticism than in the wake of optimism.

Consider the average recommended gold market exposure level among several dozen short-term gold timers I monitor (as measured by the Hulbert Gold Newsletter Sentiment Index, or HGNSI). Since gold’s mid-April high, for example, this average exposure level has risen slightly — to 54.2% from 52.0% — even while the price of gold has dropped more than $40. It’s a telltale sign of stubbornly-held bullishness when exposure levels stay constant, much less rise, in the face of a falling market. And stubbornly-held bullishness is not positive, according to contrarians.

Currently, the HGNSI is higher than it’s been on 81% of trading days since 2000. To illustrate the poor odds that gold faces because of the HGNSI’s high level, I constructed the following table. It contrasts the performance of gold mining stocks in the wake of the 19% of days since 2000 in which the HGNSI was highest, to the returns in the wake of the 19% of days in which the HGNSI was lowest. (The table focuses on the performance of the VanEck Vectors Gold Miners ETF GDX, -2.59% .)

The bottom line? Gold’s short-term prospects will be mediocre at best so long as the consumer is reticent to spend money at previous rates and gold market timers are as bullish as they have been recently.

Mark Hulbert is a regular contributor to MarketWatch. His Hulbert Ratings tracks investment newsletters that pay a flat fee to be audited. He can be reached at mark@hulbertratings.com

More: Americans use their $1,200 stimulus checks to splurge at Walmart, Target and Best Buy — here’s what they’re buying

Plus: Stashing some gold? Here’s why that could soon be illegal, according to one notable hedge-fund bear