Home
Stocks
Europe Markets: Stocks in Europe surge as focus returns to reopening economies
Prev Article Next Article
This post was originally published on this site

European stocks rallied on Monday as a lack of escalation in U.S.-China tensions put the focus back on reopening of the world’s economies.

A number of countries including Germany and Switzerland were closed for the Ascension Day holiday.

It was the first opportunity for traders in Europe to react to President Donald Trump’s Friday news conference on China, in which he took no new steps to punish the world’s second-largest economy over its new national security law for Hong Kong.

The de-escalation helped stocks resume their upward path as economies reopen that has pushed the Stoxx Europe 600 SXXP, +0.90% up over 9% over the last two months. 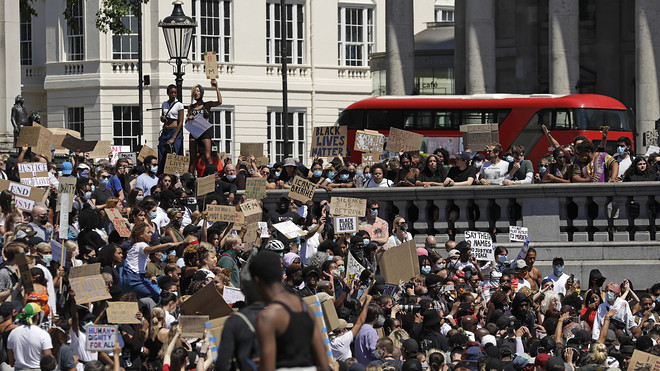 People gather in Trafalgar Square in central London on Sunday, May 31, 2020 to protest against the recent killing of George Floyd by police officers in Minneapolis that has led to protests across the US.

In the U.K., outdoor gatherings of six people were legally permitted as car dealerships reopened.

Shares in Italian bank Mediobanca MB, +9.28% soared by double digits as Italian media reported over the weekend that billionaire Leonardo Del Vecchio has requested the ECB green light to increase its stake in the bank to 20% from 9.9%.

The euro EURUSD, +0.32% rose to the highest level since the middle of March on hopes for the European Union’s 750 billion euro rescue fund.

Futures on the Dow Jones Industrial Average YM00, +0.44% rose 108 points as the protests and riots that gripped the nation had little impact.