Home
Stocks
Rex Nutting: The NBER is wrong — the recession began in March, not February
Prev Article Next Article
This post was originally published on this site 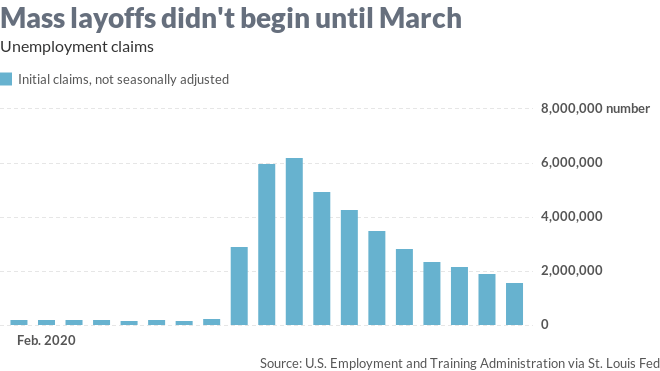 A private group of academics, the National Bureau of Economic Research, announced Monday that the recession began in February 2020 because that’s when they claim that’s when jobs started disappearing. They are wrong; it began in March.

In the grand scheme of things, getting the history of the 2020 recession wrong pales in comparison with the lives that have been lost, or the jobs that have been shed, or the dreams that have been shattered or postponed. But as a journalist trained in both economics and history, I think it’s important we get the history right, or as close to right as we can. If authorities get the little things wrong, then how can they hope to inspire confidence about the big things?

The recession did not begin in February. It began in early March, as almost everyone knows. We all lived through it. And we all remember the coronavirus pandemic hadn’t transformed the economy by the time the calendar flipped over to March. It wasn’t even on most people’s radar.

The first U.S. death from COVID-19 wasn’t reported until Feb. 29, after the supposed start of the recession. The economy hadn’t really been touched yet, although the forward-looking stock market SPX, +1.20% peaked some 10 days earlier, largely because investors could see that the United States would not be spared.

On Feb. 29, the coronavirus was still seen as a remote threat. It hadn’t yet affected travel, commerce or hiring. At most, it was seen as an inconvenience for manufacturers who needed imports from China.

Here’s what was happening in the real economy in February:

• No state had yet asked residents to work from home, or to avoid large gatherings. No sports leagues had canceled games. Few conventions, trade shows or other gatherings were canceled in February. Mardi Gras went off without a hitch on Feb. 25. Theaters, restaurants, offices, stores and factories were open throughout February.

• Few people lost their jobs in February. Layoffs did not begin to rise until the week that began on March 8, and they really took off the next week, according to initial jobless claims figures.

• Airlines were flying at capacity, and the roads and subway cars were packed. Railroads were shipping as much freight as ever. Electricity consumption was normal.

In short, the COVID-19 pandemic had little impact on the real economy during February. But when it hit in March, it hit like a tsunami.

The business-cycle dating committee of the NBER is not a government body, but the Federal Reserve, the Congressional Budget Office and the White House, among others, have outsourced the task of defining and dating economic expansions and contractions to this independent group of professors, wisely limiting the influence of politics on their deliberations.

Usually, this committee waits for months to declare that a recession has began, but this time they wasted little time in confirming the obvious: The economy was in a recession. But in their rush, they got the timing wrong.

The committee puts a lot of stock in employment as an indicator of a recession. They note, correctly, that employment fell sharply between the February and March jobs reports, released in March and April, respectively.

But they incorrectly assumed that the job losses began in earnest in February. Funny that nobody seemed to notice at the time.

In fact, the weekly jobless claims data show that layoffs did not begin to rise until the second week of March, when the household and establishment surveys were conducted.

The best available evidence, taken as a whole, show that the recession began in March, not in February. Just like the WHO, the CDC and the White House, the NBER will deservedly lose respect due to its failures during the pandemic.