Home
Stocks
Need to Know: Stocks could fall a further 7% after last week’s correction. But here’s why Morgan Stanley says that’s ‘healthy’
Prev Article Next Article
This post was originally published on this site

It looks set to be another damaging Monday for U.S. stocks.

However, in our call of the day, Morgan Stanley said last week’s correction was overdue and “healthy” and that the bull market would soon “resume in earnest.”

“We maintain our positive view for U.S. equity markets because it’s early in a new economic cycle and bull market. Last week’s correction was overdue and likely has another 5-7% downside. It’s healthy and we are buyers into weakness with a small/mid-cap and cyclical tilt,” the investment bank’s strategists said.

The team, led by equity strategist Michael Wilson, said corrections were “normal” after rapid moves higher and that last week’s correction was overdue in what they described as a new cyclical bull market.

Morgan Stanley’s economists see this recession as being “the steepest but also one of the shortest on record,” and its strategists agree there will be a V-shaped recovery.

High quality and growth stocks would still do well as the economy recovers but would struggle to keep up with more cyclical pockets of the markets, including automobiles and consumer durables, they said.

This chart from the U.K.’s Office for National Statistics shows that anxiety levels among people in Britain are higher than at the end of 2019 but have improved in recent months. 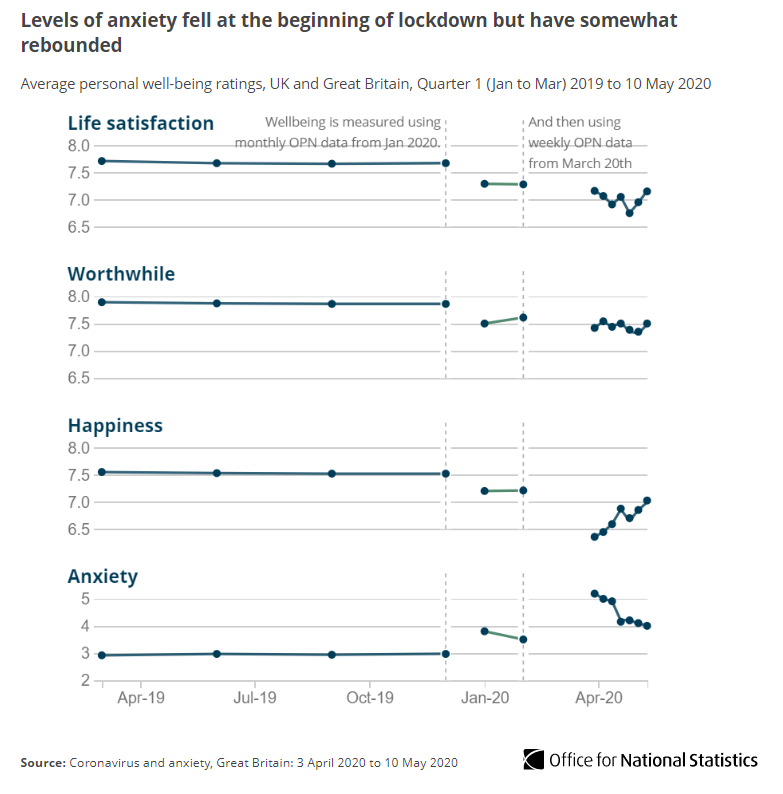 Oil major BP BP, -3.40% said it was taking up to $17.5 billion in charges and write-offs as it cut long-term forecasts for oil prices and said the COVID-19 pandemic would have an “enduring impact” on the global economy.

The Federal Reserve Bank of New York will release its Empire State Manufacturing Survey for June on Monday — economists are looking for a -27.5 reading, an improvement on May’s -48.5 score.

A number of companies are due to release results this week, including home builder Lennar LEN.B, +4.17% and technology company Oracle ORCL, +1.07% on Tuesday and retailer Kroger KR, -1.34% on Thursday. Lyft LYFT, +4.44% and Slack WORK, +1.71% will both host virtual annual shareholder meetings on Friday.

British drugmaker AstraZeneca AZN, +2.04% has reached an agreement with Europe’s Inclusive Vaccine Alliance to supply up to 400 million doses of the University of Oxford’s potential COVID-19 vaccine.