Home
Stocks
: The push for universal basic income is gaining momentum amid the pandemic
Prev Article Next Article
This post was originally published on this site 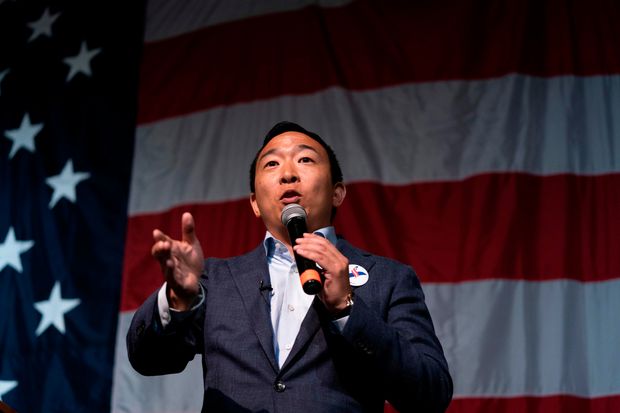 Former Democratic presidential candidate Andrew Yang campaigned on the promise to provide $1,000 in universal basic income to every American.

Amid a pandemic that has killed more than 649,000 worldwide, health experts are urging people to stay home and/or limit travel and maintain social distancing. But for many people, doing so means jeopardizing their income.

“People have a clear sense of why people are on the brink due to a situation that’s not anyone’s fault,” said Ioana Marinescu, a University of Pennsylvania economics professor who has studied universal basic income.

Don’t miss: Fauci tells MarketWatch his one big lesson from the COVID-19 pandemic — and why he won’t fly or eat out

To solve this problem, the United Nations Development Programme found that distributing a temporary basic income to 2.7 billion people living below or just above the poverty line in 132 developing countries would help curb the pandemic, according to a report released this month.

The authors calculated that a daily payment of $3.20 to people living below or just above the poverty line in South Asian countries would allow them to afford to stay home and not work dangerous jobs.

By contrast, $13 a day is roughly what is needed to keep the poorest citizens of Central Asian countries from working. Temporarily delaying debt payments to other countries is one way the UNDP says countries can make such payments.

The branch of the United Nations emphasized that this was a temporary recommendation.

“We’re not calling for universal basic income at this time,” Boaz Paldi, the UNDP’s COVID-19 crisis communications manager, told MarketWatch. “Our suggestion is a time-bound cash transfer to the most vulnerable people that work in informal sectors, don’t have any protection and can’t stay at home so they have to go out and work to put food on the table.”

Universal basic income, popularized by former Democratic presidential candidate Andrew Yang, is meant to provide a steady stream of income to people with no strings attached, similar to the stimulus checks Americans received as part of the $2.2 trillion CARES Act.

That’s different from guaranteed basic income, which is meant to ensure that lower-income people have enough money to afford basic necessities.

In May, 17 mayors from cities across the country, including Atlanta Mayor Keisha Lance Bottoms, a potential Democratic vice presidential candidate, founded Mayors for a Guaranteed Income.

“Even prior to the pandemic, people who were working two and three jobs still couldn’t afford basic necessities,” a statement put out by the organization reads. “COVID-19 has only further exposed the economic fragility of most American households, and has disproportionately impacted Black and Brown people.”

“ ‘COVID-19 has only further exposed the economic fragility of most American households, and has disproportionately impacted Black and Brown people.’ ”

— Mayors for a Guaranteed Income

The organization’s founder, Stockton, Calif., mayor Michael Tubbs, is running a 24-month-long experiment in which 125 people who make under $46,000 a year were given $500 a month with no strings attached until Jan 2021.

“COVID-19 has not only exposed the economic fragility of most American households but has also disproportionately impacted Black and brown folks — some of the most vulnerable individuals in our communities,” Tubbs told MarketWatch in a statement. “Direct, recurring cash payments are a critical first step to guaranteeing everyone has an income floor and ensuring the economic security of all Americans.”

The experiment received initial funding from the Economic Security Project, a progressive group launched after the 2016 election that was co-founded by Facebook FB co-founder Chris Hughes and has worked with think tanks.

Why UBI momentum is growing during the pandemic

“Before the health crisis, we had a human-made crisis,” said Natalie Foster, co-chair of the Economic Security Project, referring to the economic hardships faced by millions of Americans who are struggling to make ends meet.

Similar to the renewed push for a $15 federal minimum wage, the pandemic has forced people to see others in a new light — particularly essential workers, who are often paid low wages, Foster added. “We’re starting to think about, what do we owe them?” she said.

At the same time, the pandemic has also left more than 30 million Americans jobless. Food banks are stretched to their limits because of the surge in demand for food assistance, and some 12 million Americans could be evicted from their homes.

“ ‘The maliciousness of economic pain is being felt more widely and people are saying, “I don’t want to live in that world.”‘ ”

“The maliciousness of economic pain is being felt more widely and people are saying, ‘I don’t want to live in that world,’” Foster said. “Guaranteed basic income says no matter who you are, you have worth and deserve life’s basic necessities.”

In addition to Mayors for a Guaranteed Income, Project 100, a direct cash-assistance campaign started by three nonprofits, GiveDirectly, Propel, and Stand for Children, also launched amid the pandemic in April.

Since its inception, Project 100 has distributed $260 million to more than 270,000 households, surpassing its goal of $100 million to 100,000 families in 100 days. It is backed by Yang and Stacey Abrams, the lawyer, voting-rights activist and another potential VP pick, as well as celebrities like singer Ariana Grande and actress Julia Louis-Dreyfus.

“For over a decade GiveDirectly has been committed to delivering no-strings-attached cash to the most vulnerable — and we’re glad that the idea is gaining momentum,” said the organization’s managing director, Joe Huston. “Organizations, political leaders, and citizens worldwide are recognizing that direct cash assistance is not only effective but provides people the dignity of choice by empowering them to define their own needs.”

When tribe members of the Eastern Band of Cherokees in North Carolina received a cash payment of $4,000 to $6,000 a year funded by a profitable casino in 1997, drug use declined, according to studies later conducted by economists.

The cash payments tribe members received caused “a reduction in the stresses associated with financial limitations,” Marinescu said. Once people have a more stable household income, they are less likely to turn to addictive substances, she added.

“ Critics of universal basic income programs say they cause people to work less or less likely to search for a new job particularly if they are unemployed, but research on their impact has proved more complicated than that. ”

Marinescu’s own research on Alaskans who receive a yearly cash dividend from the state showed no effect on employment and a slight increase in part-time work. The 2019 checks totaled $1,606 per person. Additionally, she said the checks produced a “stimulus effect” whereby people were spending more money within the local economy, which supported more jobs.

But an experiment conducted in Finland where 2,000 unemployed people received monthly payments of about $685 showed the opposite effect.

The majority of people who received the monthly payments did not seek out new work opportunities, though their well-being did improve, according to a preliminary report published in 2019.

That’s a hefty price to pay for happiness, opponents contend. Critics of universal basic income say it would cause people to work less or search less for a new job, particularly if they are unemployed.

The cost of funding the universal basic income plan proposed by Yang, amounting to $1,000 a month for every American, could cost more than $4 trillion, according to one estimate. That’s more than the entire U.S. budget in 2018.

“Where would the money to finance such a large expenditure come from? That it would come mainly or entirely from new taxes isn’t plausible,” Robert Greenstein, the founder and president of the Center on Budget and Policy Priorities, a nonpartisan research policy institute, wrote in a commentary. “We’ll already need substantial new revenues in the coming decades to help keep Social Security and Medicare solvent and avoid large benefit cuts in them.”