The Nasdaq Composite Index is starting August on a high note, which could push the technology-laden benchmark to its fastest 1,000-point milestone in at least 20 years.

Those handful of companies have been considered by investors more resilient to the uncertain outlook created by the COVID-19 pandemic that has driven the U.S. economy into a recession.

But even if the index takes a few more trading days to hit that level, it could still match or exceed the 49-day sessions it took to climb from 4,000 to 5,000 achieved in 2000 (see attached table). 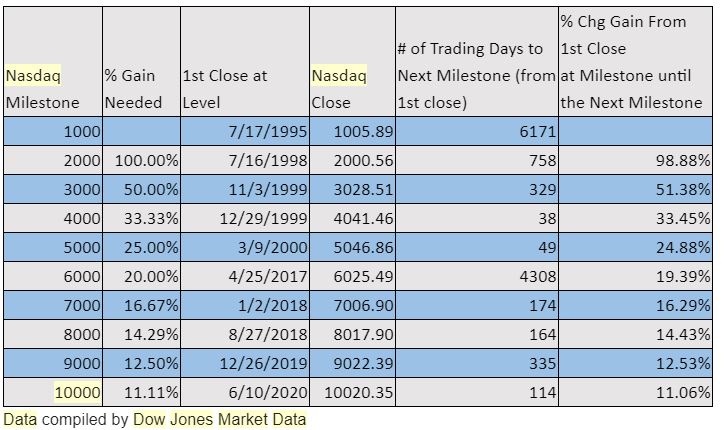 To be sure, those periods of powerful gains for the Nasdaq came during the dot-com boom and bust, where valuations between tech-centric companies and their earnings were arguable their most divorced. And point moves become less impressive as the index rises. A rise from 10,000 to 11,000 marks a 10% rise, while the 1999 move from 3,000 to 4,000 was a rise of 33%.

Some investors have expressed concern that the Nasdaq, led by the aforementioned giants of the tech sector, have seen rabid interest that has propelled the sector well ahead of rational ways of measuring their value, including price to earnings, or P/Es.

The Nasdaq Composite has soared about 60% since hitting a March 23 low, while the S&P 500 index SPX, +0.71% has climbed 47% and the Dow Jones Industrial Average DJIA, +0.89%, which has a lower concentration of tech-related companies, has climbed 43% over the same period.