Home
Stocks
Economic Report: Google searches on how to ‘file for unemployment’ points to further drop in weekly jobless claims
Prev Article Next Article
This post was originally published on this site

The number of people filing for unemployment benefits has fallen sharply in the past few weeks, and based on Google search trends, they are likely to keep dropping.

The level of Web searches on Google for how “to file for unemployment” has closely tracked the unprecedented rise and fall of initial jobless claims since the coronavirus pandemic began in the U.S. in mid-March. Google has become a repository of useful and real-time information to Wall Street DJIA, +0.30% on how the economy is recovering.

Read: Americans worry the economy will suffer for a long time even as they keep spending

When new claims soared to a record 6.9 million at the end of March, searches on Google GOOG, +0.91% also reached a peak. Since then the number of Google searches has foreshadowed a decline in initial jobless claims to the most recent total of 963,000 in the first week of August.

Perhaps not surprisingly, new searches on how to file for unemployment seem to peak on Mondays, suggesting most laid-off or furloughed employees finish out their last work week on Friday and wait until after the weekend is over to apply. 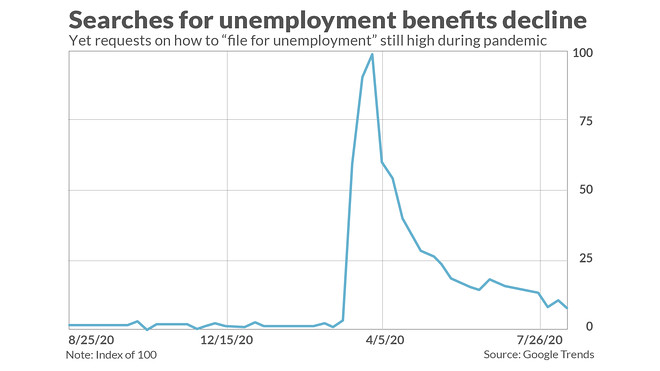 Most recently searches on how to file for unemployment predicted the surprising — at least to Wall Street — 33% drop in jobless claims in the last two weeks.

They fell from a seasonally adjusted 1.44 million in the last week of July to 963,000 as of the week ended Aug. 8, around the time of the expiration of a temporary extra $600 federal unemployment stipend. It was the first time new claims have fallen below 1 million a week during the pandemic.

Some economists wonder if the end of the federal benefit made people think they were no long eligible and some analysts believe the loss of the extra $600 induced others to return to work if they were able to, or to look for jobs again.

Read: Did the expired $600 federal jobless benefit keep people from going back to work?

What does Google Trends show now?

Searches for unemployment benefits still appear to be declining. Economists polled by MarketWatch predict new claims will slip to 910,000 in the week ended Aug. 15 when the data is published on Thursday.

While that would be good news, new claims are still almost five times higher than they were before the pandemic began. Before the crisis new claims were in the low 200,000s and running near a 50-year low.

Among the states, searches for new claims are the highest in Michigan. The Wolverine state has the sixth highest unemployment rate at 14.8% as of June.

The fewest searches occur in Utah, a state with the second lowest unemployment rate at 5.1%.