Welcome to the latest phase of the currency version of a Cold War?

The euro remained under pressure Wednesday, a day after a hard-charging rally that took the euro EURUSD, -0.57% briefly above $1.20 versus the U.S. dollar for the first time since May 2018 quickly gave way to a selloff. The turnaround was tied in part to remarks by European Central Bank chief economist Philip Lane, who said the exchange rate “does matter” when it comes to monetary policy. 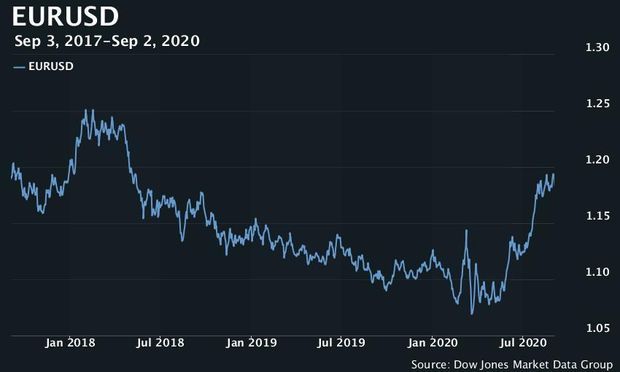 Coming after eurozone inflation fell to its lowest level since the first quarter of 2016, Lane’s remarks were taken as central banker talk meaning the rally had gone too far to the bank’s liking. A stronger currency is disinflationary, making imports less expensive and contributing to tighter financial conditions.

Typically, ECB officials are reticent to say much about the exchange rate other than to say it is part of a mix of factors they look at when assessing conditions and setting policy.

“We’re barely into September and talk on FX by G-10 central bankers has already begun ,” said Viraj Patel, FX and global macro strategist at Arkera in a Wednesday note. Patel last month warned that the euro’s rally was nearing the ECB’s “pain threshold” and was increasingly likely to spark pushback from policy makers.

That’s part of a broader potential backlash against a falling U.S. dollar, which has retreated sharply from its pandemic-induced March high. While the dollar’s slide is seen as generally beneficial to global economic growth, particularly in emerging markets, it also threatens the continuation of what Patel calls the “cold currency war” that has flared up at various times since the global financial crisis.

He constructed an FX Strength Aversion Index in August, ranking G-10 countries according to how much they could tolerate the macroeconomic costs of a strong currency, and found the Swiss franc USDCHF, +0.25% and the euro most at risk of seeing policy makers push back on further currency gains.

What’s next for the euro?

“At this point, the policy makers can do little to control the FX flows but if their jawboning takes effect the EURUSD could retreat towards the $1.1700 figure as medium-term traders take profits from the current rally,” said Boris Schlossberg, managing director for FX strategy at BK Asset Management.

That could also have implications for stocks after the S&P 500 SPX, +0.86% and Nasdaq Composite COMP, +0.26% ended at records Tuesday.

“Euro’s weakness, in turn, would lead to dollar strength and would be yet another reason for equities to turn lower as U.S. assets become more expensive in other currencies ,” Schlossberg said.