Home
Stocks
Trump Today: Trump visits North Carolina as latest polls give him an edge in that swing state
Prev Article Next Article
This post was originally published on this site 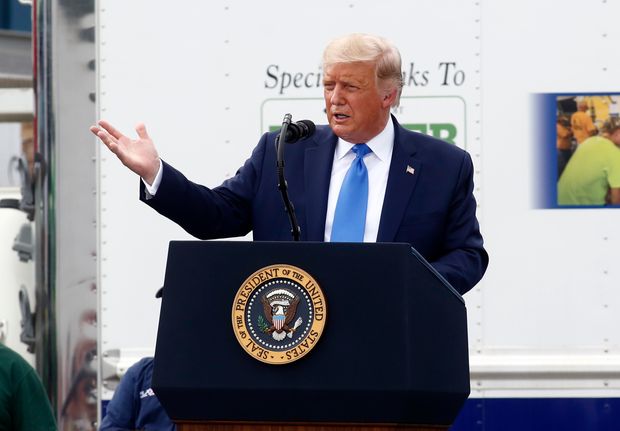 President Donald Trump on Wednesday is slated to make another visit to North Carolina, as the latest polling in that swing state showed him regaining a slight edge over Democratic challenger Joe Biden in the wake of last month’s party conventions.

Trump is expected to make a speech at 2 p.m. Eastern Time in Wilmington, N.C., about its designation as the first American World War II Heritage City. The port city is known in part for being home to a major shipyard during World War II, as well as for currently being home to the Battleship North Carolina, which Trump is due to tour.

Trump tweeted about his Wilmington trip on Wednesday morning, saying: ” Look forward to seeing all of my friends!” The trip comes on the 75th anniversary of the end of World War II.

The president appeared in person at a Republican National Convention event in Charlotte last week, saying he “felt an obligation” to be in North Carolina, a state “that’s been very good to me.” He criticized Biden for not going in person to his convention in Wisconsin, another battleground state.

Ahead of Trump’s trip on Wednesday, the Biden campaign issued a statement from the former vice president criticizing the Republican incumbent.

“President Trump likes to call himself a wartime president, but the reality is that North Carolinians are still suffering because he surrendered to COVID-19 long ago,” Biden said in the statement.

“Instead of providing North Carolina the roadmap and resources needed to protect small businesses, schools, and families, he has criticized local leaders and threatened educators for listening to public health experts.”

Biden plans to give a speech Wednesday in which he attacks Trump’s push for schools to reopen amid the coronavirus pandemic.

In a RealClearPolitics moving average of North Carolina polls as of Wednesday, Trump is leading Biden by 1 percentage point, after being down by 5 points a month ago.

In swing states overall ahead of the Nov. 3 election, Biden still has a 2.5-point advantage over Trump, but that’s down from a 6-point edge a month ago, according to a RCP average. Betting markets give Biden just a 50.2% chance of winning vs. 61% a month ago.