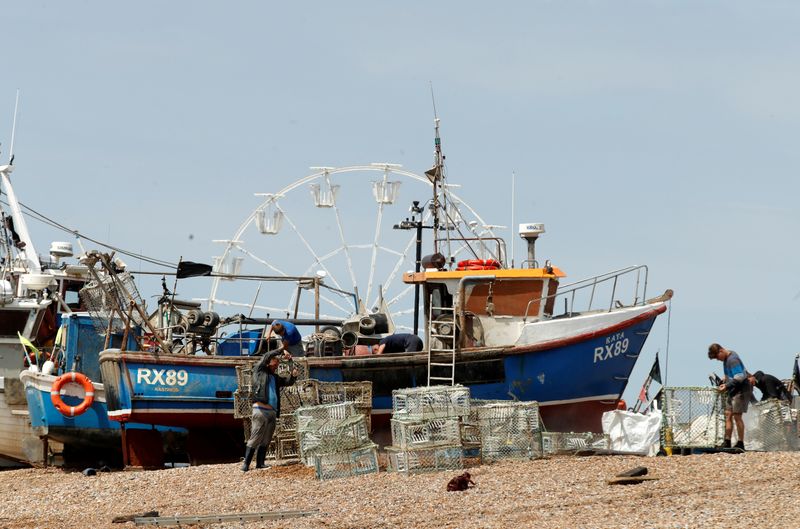 BRUSSELS (Reuters) – Britain offered tentative concessions on fisheries in trade talks with the European Union last week, two diplomatic sources told Reuters, just as London was publicly threatening to breach the terms of its divorce deal with the bloc.

The sources, who did not attend last week’s talks between the sides’ chief negotiators but were briefed on them by the EU negotiating team, described the offer as a possible bid by London to overcome a key obstacle to a new trade deal from 2021.

They said it also suggested London might still be open to clinching an agreement despite a crisis in Brexit talks over Britain’s Internal Market bill which, if passed by parliament as proposed, would breach Britain’s international legal obligations as well as the EU divorce treaty.

Britain formally left the EU in January but the two sides are seeking a new trade deal before a status-quo transition arrangement ends in December.

The talks have all but stalled over disagreements on fishing rights, state aid rules and other guarantees of fair market competition, and ways to solve future disputes.

But the two EU sources said London had floated two ideas on fisheries which were a departure from Britain’s position so far that it must take control of its territorial waters in the Channel from next year.

“The UK definitely seems to be coming around on this, they seem to be moving cautiously towards some opening on fisheries in the technical talks,” said one of the sources.

The second source reported a “tentative, modest” move on fisheries after Britain this summer pushed a more rigid line, which the EU has rejected.

Asked to comment, a British government spokesperson did not address the main point directly but said: “Our position on fish is reasonable and straightforward.”

“We want a simple, separate fisheries framework agreement which reflects our rights under international law and which provides for annual negotiations over access and sharing opportunities based on the scientific principle of zonal attachment.”

“This is a fairer, more modern and scientific approach that is already the basis for the EU’s existing fisheries agreement with Norway and respects each party as an independent coastal state,” the spokesperson said.

Britain has said it will become an “independent coastal nation” after the transition period ends, enabling it to control its own waters, and who fishes in them, and to increase the British catch.

Brexit supporters see fisheries as an important symbol of sovereignty and say fishing grounds in British waters should be primarily for British fishing crews. The EU says it wants a “fair deal” that gives access for boats from the bloc’s member states like France and the Netherlands.

Failure to agree on trade would be expected to lead to trade barriers being erected between Britain and the EU, the world’s largest trading bloc.

Officials on both sides have said there has been some progress on technical aspects of the talks on fisheries, including on quota sharing and a list of stocks, but London says the EU has not accepted that Britain will become an independent coastal state.

Under one proposal described by the EU sources, the sides could agree to a “phasing-out mechanism” for fish quotas that would increase Britain’s share in time, rather than overnight from Jan. 1, 2021.

Under the second idea, EU vessels around the Channel islands including Jersey and Guernsey could be exempted from restrictions that would be tighter than those now in place on fishing in British waters up to 12 nautical miles from shore.

Britain wants to be responsible for managing its territorial waters out to 12 nautical miles from shore, out to 200 nautical miles in a so-called exclusive economic zone, or out to a median line between the British coast and the costs of other states.